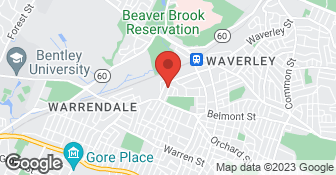 We are a family owned and operated business with a combined 30 years of experience in the chimney cleaning, restoration and masonry fields. We are affordable, honest, reliable and a pleasure to work with. We proudly service the Metro West Boston and the greater Boston areas. At RockSolid Chimney, we are not just looking for customers, we are looking for "Customers for Life". We accept cash, check and credit cards. Any work that requires a Massachusetts Construction Supervisor License will need to have the permit pulled by the homeowner....

The work went well. The workers were professional and helpful in their explanations of the project and punctual about completing it.

I could not be happier. Obviously, I have not climbed on top of my 3 story house to look close up, but even from the ground I can see that what was clearly a rickety chimney now looks, well, rock solid. The chimney cap is in place and it clearly looks like it's going to stand for a very long time. Ted called me within minutes of me doing the search on Angie's List, but since Rock Solid was one of the companies that came up with an A rating and excellent reviews, and since he could come out very quickly, I decided to see what he said. Time frame was important here, since you could see the sky through the gaps between the bricks of the chimney, and we have solar panels near by. If a brick fell it could damage a solar panel and that would be very bad. In fact, Ted said that the best course would be to rebuild the chimney entirely, but given the solar panels he wouldn't want to take the chance. It looked rebuilt when they left today. He gave me the estimate on Tuesday and was able to make it here on Friday (today.) He *did* tell me he wasn't a morning person and wouldn't be out early, but I didn't need to be here so long as they had access to water and electricity. Well, I don't know when they arrived because I didn't hear a thing. Just when I went out I saw the ladder. They were done by 4pm and everything looked beautiful. The ground underneath was perfectly clean. I gave him a check and now I've got a fully repaired chimney that isn't going to fall down. All good! Much happiness all around. I certainly recommend Rock Solid Chimney.

They did a nice job -- quick clean and left no mess. Would hire again.

I made an appointment for them to be here between 10 and 12 on a specific date. When they hadn't shown up or called by 12:30, I called but got voicemail. I left a message but didn't hear back. I called again sometime later, still got voicemail, left another message. Around 5:00 I got a voicemail: "Sorry we didn't get around to your location today. Please contact us to set up another appointment." What's that expression? Fool me once, shame on me. Fool me twice? I don't think so.

Description of Work
Needed to have them look at a fireplace damper that wasn't working.

I learned that the flues did not need cleaning, but that there was about 4 feet of flue lining that was missing from the top of the chimney--there are ceramic tiles in there and for whatever reason, 4 ft were missing from the top. They replaced this with a liquid/concrete/solidifying material to seal/line the flues

A pleasure to deal with. Arrived in the time window they gave me and quickly cleaned the chimney and left no mess.

Very professional and competent. Explained all the repairs that were needed, as well as the process involved. On time. Cleaned up thoroughly after work was complete.

The work went well but we can't really tell, until time has passed and we have some really heavy rainstorms. Willard, the foreman was good to deal with. It is important, as always, to clearly define the tasks that need to be done.

Description of Work
Masonry repairs on brick walls of 4 chimneys of a small condo association house to seal leaks.

Never happened. Had to get a refund.

Description of Work
Attempted to schedule service to reset some stone on my front stairs.

RockSolid Chimney, LLC is currently rated 4.7 overall out of 5.

No, RockSolid Chimney, LLC does not offer eco-friendly accreditations.

No, RockSolid Chimney, LLC does not offer a senior discount.