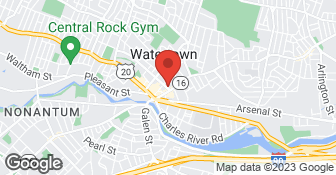 I hired Chase and Tolan Plumbing to service my gas steam boiler (stuck low water shutoff switch, broken sight tube, and leaky discharge valve), and replace the input shutoff valves to my washing machine and my dishwasher. They showed up promptly with three men and got the job done right and fast. I was very happy with the service, and would hire them again without hesitation.

Great - they replaced it rather than just try and repair only to have to return again. Made sense to me since it had previously tinkered with to try and remedy the problem.

Description of Work
My toilet had a flapper that was not working causing the water to continue to run at times.

Job went as planned with some additions per inspector's instruction; C&T were very responsive, timely, and easy to work with. I would call them again for any related plumbing work. Estimate matched cost, with the additional work per inspector; reasonable rates for market.

Really well. They do great work and are very friendly!

Description of Work
Water block to 2nd floor of the house. block was difficult to identify by other plumbers.

Great. The associate was ablevto diagnose the problem and fix it in am hour.

Description of Work
Called them on a wednesday afternoon. Said they could be there first thing innthr morning to fix a shower faucet. Showrd up in the morning andbwad done in an hour for a very fair price. Great asdociate as well.

I called Chase & Tolan b/c I'd used them a few times before an had no complaint at all. I reported to them that the hot water was not consistent - that in trying to fill the tub, it went to cold and then back to warm, but I got plenty of hot water in the kitchen. He said it definitely sounds like the thermostat on your water heater - and he set up a date to replace it. They replaced it. The problem was NOT solved. Same thing happened. They sent someone out, and within minutes they found the problem - my exterior faucet for a outdoor hose had a valve that was open and allowed cold water to be mixed with hot water. This was the problem. I never needed a new water heater. I asked for them to take some responsibility for replacing a perfectly working water heater. The water heater that was there had been replaced under a warranty about 5 years ago. He got back to me and said that he checked and my water heater was 13 years old. I asked him to double check that, and he sent me a photo of a water heater with a 2003 date written in a large marker. It was NOT my water heater. When I left message and an email pointing out that the photo was a different brand water heater and that mine did not have a date marked on it, I NEVER , EVER HEARD FROM HIM AGAIN. I was not asking for a big refund, I was asking for what I thought was some fairness and accountability. I asked that they credit either the installation labor, OR their profit on the water heater - I was asking them to reduce their personal profit from completely mis diagnosing the problem and needlessly installing a new heater. Not getting back to me, or taking any responsibility for their mistake is why I am writing this review.

I have used Chase & Tolan for years, for many jobs. Good reliable neighborhood plumber. If something is broken/urgent, they are great. They have, on several occasions, given me instructions over the phone that have allowed me to "fix" something myself without a service call, or at least get to a point where nothing is leaking. If they have to come out in an emergency, they come right away and are mindful of your time and expense. I haven't found this plumber as useful for scheduled jobs (changing out something that's working), or maintenance, it doesn't seem to be their focus, but they are great in an emergency.

On time, efficient and all seems to be going well so far.

Great! I'd used them before, but this was a job I needed to be done well because I was in process of selling my home. C and T were prompt. polite, professional. Wonderful local company.

Description of Work
Provider fixed a toilet prior to my moving out.

Chase & Tolan were terrific. Professional, on time, on budget and a pleasure to work with. we have used them as our plumbers for years but thyis project was the largest we have attempted. Would not use anyone else

They came, they did the job and they left. They did a great job.

Dave Chase came to house to prepare estimate for installation of new gas/steam boiler and promised quote within a week. When I did not receive the quote I emailed the following week and was told he was on vacation. I have emailed and phoned many times since. It is now the middle of February 2014, almost 2 months later, and they have not responded at all -- not even to give me the courtesy of letting me know they are not interested in doing the job. In reading other reviews, this looks like a strange pattern with this company: either they provide excellent service or they are completely unresponsive. If you are considering using Chase and Tolan, make sure you have a back-up plan or you could be left in the cold.

Description of Work
Was to prepare estimate for installation of new heating system.

This is an excellent company! The respond to my calls immediately, and to problems quickly. They are pleasant and personable, reasonably priced, efficient and competent. I have no hesitation about recommending them.

Description of Work
I was introduced to Chase & Tolan by my general contractor when I did a kitchen renovation in the summer of 2008. I have used them ever since as my regular plumbers for all my plumbing needs

I have used this company many times. They do excellent work, stand behind their work, are punctual and trustworthy.

They came out for an estimate for the project. I called 3 times to get the estimate, but was never called back.

Description of Work
I was calling for them to install a new heating system.

The plumber showed up on time and did the job within a couple hours. They were compentent and knew what they were doing.

Description of Work
They had to replace the shut off valve that went to the washing machine.

The dispatcher set the appointment for 9am. The plumber showed up at 858am. They brought all three disposal options and explained why the medium powered one would probably be the best for the rental unit. The plumber showed up in surgical booties over his boots to not mar the floor. He placed a mat in from of the area he was working in. He cleaned out the few bottles (cleaners) under the sink and put them in a bag. When he was done he washed the entire under sink area and wiped the bottles off as well.

Description of Work
Changed out the garbage disposal.

David is very responsive. Overall A+++

Description of Work
We have had the team in for numerous things. We have an old house, we have had showers temperature regulators replaced, leaks resolved, blocked drains repaired, dryer vents and furnaces cleaned and toilets replaced.

Description of Work
no service rendered. the request was to fix a leaky faucet in bathroom.

Our hot water heater died at 8:00 on a Monday night. I left a message with Chase and Tolan's answering service at 8:30 pm, and received a call back at 8:00 the next morning saying they would be over at around 10:30 am to remove the broken water heater and replace it. They arrived around 11:00, and worked until the new water heater was installed and working. Less than 24 hours from discovery of the problem to problem solved - we couldn't have been happier!

Description of Work
They removed our broken hot water heater and purchased & installed the new one.

The plumber that Chase and Tolan sent seemed very smart and knowledgeable. He discovered that the pipe below my sink was leaking, and the shower drain was starting to get clogged. He did not find any signs that there was a leak behind the wall. He told me that given the kind of pipes I have, I may hear a knocking sound when the air is cold and the pipe heats up. Since the problem started when the weather got colder, his explanation seemed plausible. I'm a new homeowner and have never lived in any place that had either of the problems I called about. I liked how he answered my questions thoroughly and treated me like an intelligent person. He also investigated my concerns thoroughly before giving me his assessment. He wasn't able to determine the cause of the smell in my shower drain but said that I should fill the tub and sink with hot water periodically, and let the water drain at once. My drain does still smell now and then but his recommendations makes the smell go away and I don't have to use harsh chemicals.

Description of Work
I called Chase & Tolan about two problems: (1) When I used the sink in my bathroom, I could hear a dripping noise behind the wall and (2) periodically a funny smell would come out of my shower drain.

The 'Halloween' storm of 2011 had come thru, so many people were dealing with plumbing issues, partly because of the widespread electrical outlet. We thought we had little hope of getting a plumber here to fix what had just become apparent: a sewage blockage so severe and intractable that we needed to have the pipes cleared every other day!!!! Our basement kept on filling with disgusting sewage. A drain cleaning company , understanding the scope of the problem, recommended Chase and Tolan, and David Chase came over to scope out the problem and give an estimate within a day. That was Friday, and even though they were stretched thin in light of the problems everywhere, they had two men over on Monday. (They were wonderfully efficient, and in touch with headquarters to affirm their diagnosis and recommendation.) They tore up the concrete, removed the old pipe (which was filled with a radish-shaped root which totally blocked the pipe), replaced it with a new cast iron pipe (at an improved wider angle which will discourage the chronic blockage we've had over the years, and make the drain much easier to clean out). They re-concreted the ditch they'd made around the pipe, even doing a good job of that! With the length and complexity of the job, we doubted that David Chase's original estimate would hold, but it did, and the $1600 included both labor and the pipe.

Description of Work
Excavation of concrete, and replacement of very old root-bound interior sewage clean-out and effluent 'elbow', replaced with new cast-iron version, but at improved wider angle. Re-concreted up to ground level.

Our company strives for perfection regardless of the size of the job. The satisfaction of our customers is our main priority.  …

CHASE & TOLAN PLUMBING is currently rated 4.7 overall out of 5.

No, CHASE & TOLAN PLUMBING does not offer eco-friendly accreditations.