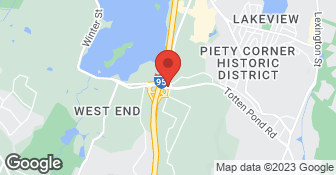 NO SUBS. CHARGES A FLAT RATE FOR SERVICE, NO TRAVEL CHARGES....

Had a some water damage in one of our closets. couple of other contractor's had come out and recommended that the whole floor be ripped out and replaced at a cost of $1500 to $2000. Tidi was recommended by an Angie's list super service award winner. Tidi came out very quickly after being called, looked at the damage and suggested that we can replace only the damaged wood, and he can sand the whole area and will match easily. His estimate much more reasonable. About couple of weeks later came out, spent about couple of hours and finished the job. When I looked at it, I thought not all of the boards that were damaged were replaced. I could not examine closely due to wet finish. He assured me it was replaced. Couple of days later, when I could examine closely, the floor was still warped and it was obvious he had replaced less wood than he had originally planned. After several calls, he came back out again and sanded the area down a fair amount trying to flatten some of the boards that were supposed to be replaced. it is a bit better now, but still warped. It does not look very nice but luckily it is in a closet and not a daily reminder of what a bad job was. I would not hire again and probably will need to have it refinished properly in the future. I guess you get what you pay for......

Description of Work
Refinishing of hardwood floor in a closet

Tidi was polite, friendly, and the floors came out great!

Description of Work
I got Tidi's name from my real estate agent. She suggested I contact Tidi to have the floors in my new condo refinished (the kitchen were especially worn).

It went excellently. Tidi was responsive, professional, on time, and a hard worker. He delivered what he said he would (white oak, finished in place) even quicker than he said it would take, and we are very happy with the results. This was a very short-notice job, and Tidi worked around his schedule so he could accommodate us, and he made us feel very comfortable.

Description of Work
The second floor and stairway needed carpet ripped up, removed, and hardwood laid and finished. The main room on the first floor also needed to be refinished.

We received Tidi's contact info from a general contractor we'd met and liked. Tidi returned our call promptly and scheduled a mutually convenient time to come over and give us an estimate and answer questions within a few days. On the scheduled date, he arrived on time with a crew of 3 guys. After setting up, Tidi let me know he would leave to go to another job and return, and gave me his cell number and told me who was the lead guy in charge. Tidi came back at the end and wrapped up the job at the end of each day. They did not all speak a lot of English, but it was plenty to communicate as needed. Tidi was incredibly professional, but a couple of the guys on his crew were not dressed as professionally (one had a mohawk of sorts, another had an earring, etc.), so I rated professionalism as a B. However, they all seemed like very nice men and I felt comfortable with them in my home. After the first layer, I noticed some minor imperfections - a few drips on the fronts of the stairs and areas where the wood was sanded with too rough of a grit and you could see the sanding circles. Also, they had applied wood putty where I'd specifically requested it, but not everywhere that needed it, so some cracks remained. And in a couple places, the wood putty wasn't sanded down enough, leaving a smudged-looking area. For the most part, the crew addressed the areas I pointed out. Tidi said the softer woods (pine, fir) would show the sanding more, but I felt this wasn't necessarily true if they would use a finer grit of sanding paper... On the plus side, the layers were applied in very even, thin coats and they look great compared to other floor jobs I've seen. After the job was finished, we noticed some areas with bubbles and areas that weren't smooth. When we called Tidi, he said no problem, and came back out at his earliest availability right after the weekend. He explained that he thought the bubbles were in part due to the weather (it was rainy and humid the 2 days they'd done the work), but happily re-buffed and re-coated the entire room free of charge wherever we pointed out the bubbles (which was 3 of the 4 rooms and the landing/hallway). After this last coat (which was done on a sunny, dry day), everything looked very smooth. They did a pretty good job of cleaning up and leaving everything as it was. A little polyurethane was spilled on the outside steps, and a few drips on the downstairs floors that they missed. They set our upstairs window unit to A/C at 65 degrees (instead of on the Fan setting as we'd left it) with all our windows open (And they knew we were leaving the house for the rest of the week while the floors cured. Oops. We found this when we'd returned.) There were also scuff marks on some painted trim and a tile floor where they'd moved/set their equipment - the scuffs came off the tile with some scrubbing, but the trim will need to be re-painted. Nothing irreparable, though. Overall, the quality was good and the price reasonable. Their speed was fast, and their responsiveness and desire to make sure we were satisfied was great. If you're someone who wants super attention to detail or advice on staining or more complicated refinishing work, we would not recommend him - for this, you'd want to find (and pay for) a higher end service and probably expect it to take a longer, too. We DO recommend Tidi highly to anyone who wants floors done very quickly, reliably, and very well, for a fair price. He gets very high marks for being a friendly contractor who is very easy to work with, and he will definitely make sure you're satsfied with the job. Overall, we are quite pleased with the final result and the floors look a thousand times better than they did before.

Description of Work
We asked Tidi to sand floors to bare wood and refinish with 2 coats of polyurethane. Area included 4 small-medium rooms, 2 staircases, 1 landing/hallway, and 4 closets. We asked him to apply matching wood putty where there were spaces in the planks. One bedroom had fir wood, another bedroom had pine and the remaining floors were red oak. Some of the floors were in really bad shape, worn to bare wood with water stains. We did not ask him to stain the floors nor to bleach areas that had water stains. After the job was done, we realized that the fir wood had originally been stained to match the pine; once refinished, that room no longer matched the rest of the 3rd floor. We like it okay as is, but might have prefered to re-stain it if Tidi had advised in advance that it was going to look differently at the end. Most of the water stains were removed effectively by their sanding - only one area that was really badly stained remains slightly different, but it is MUCH better than before. The job took about 5 hours the first day to sand and coat with 1 layer of polyurethane and they returned the next day for 2 hours to buff and re-coat with a 2nd layer which was meant to be the final coat. We were not completely satisfied at that point, however, and they returned to do a 3rd layer for some floors (see below). The last coat took just 1 hour to buff and re-coat.

This contractor really impressed us because he definitely had to use out-of-the-norm thinking for the flooring project we had at hand. What we wanted done required an out-of-the-box thinker because it was not your typical type of project. He was able to take our idea and actually apply it even though it was something he had never tried before. That is basically what we were looking for in a contractor - someone to take our idea we came up with and make it happen. He was just great. He kind of experimented with us, which we appreciated. He listened to what we really wanted and was willing to try it so we appreciated that. It turned out really nice looking too.

Description of Work
He redid the hardwood floors in our entire home. He did five rooms in total. He brought in a lot of guys and resealed, stained and polyurethane our floors three times.

I WOULD SAY THAT SO LONG AS POTENTIAL CLIENTS KEEP AN EYE ON HIM, ASK HIM TO REVIEW EACH STAGE, & CHECK ON THE WHOLE JOB CAREFULLY BEFORE HE LEAVES, THE PRICE IS WORTH IT. HE IS VERY PERSONABLE TO WORK WITH & WILLING TO CORRECT MISTAKES.

MR. NAVARRO WAS ON TIME, CLEAN, FRIENDLY. ALSO WASHING MACHINE WENT ON FIRE. HE SAVED THE DAY. DISCONNECTED IT FOR MY WIFE, KAREN, & KIDS. VERY ALERT TO PEOPLE'S FEELINGS & STUCK TO HIS PRICE. NEAT, NEAT JOB. WE LOVE IT!

THERE WAS NO HASSLE, AND CONSIDERING THE AGE OF THE HOME, THE FLOORS WERE IN TERRIBLE SHAPE AND HE WAS COMPLETELY UN-PHASED BY THAT. I WAS VERY HAPPY WITH HIM. OTHER COMPANIES WOULDN'T EVEN DO THE JOB, THEY WANTED TO SELL ME NEW FLOORS. HE ISN'T BIG ON PAPERWORK, BUT HE IS VERY TRUSTWORTHY AND DOES A GREAT JOB. HE WAS VERY PROMPT AND PROFESSIONAL.

We specialize in all phases of flooring services, such as laminate, vinyl, hardwood, tile, and more! We guarantee your satisfaction, and we won’t leave until the job is done right. We pride ourselves on the quality work we provide, while delivering great customer service! Check out all the services we offer below and call -or- click to schedule a free estimate today!  …

You will get a response back within minutes!!! Third generation flooring company supplying flooring services to Massachusetts and New Hampshire. Ronnie Jrs provides expert hardwood and laminate flooring installation, Hardwood flooring repairs and dustless floor sanding in the mass and New Hampshire area. My direct line is 978-423-3633. Please allow us at Ronnie Jrs Hardwood Flooring to enhance ur home with a new or resurfaced floor. Work with all types of hardwood flooring including oak, maple, bamboo, and prefinished hardwood flooring at wholesale prices. we are fully insured and would love to give you a free estimate please email @jbw0510@yahoo.com  …

We are wholesale flooring company. We provide both sale and installation of all flooring products. We take pride in knowing the market and maintaining significant just-in-time inventory quantities. We offer competitive pricing and above all, our relentless mission is to provide the highest level of service to our customer. Our durable, yet beautiful flooring options are carefully cut and installed by our expert craftsmen. We are fully insured and use only the top of the line equipment.  …

TIDIS HARDWOOD FLOORS CONTRACTING is currently rated 4.3 overall out of 5.

No, TIDIS HARDWOOD FLOORS CONTRACTING does not offer eco-friendly accreditations.

No, TIDIS HARDWOOD FLOORS CONTRACTING does not offer a senior discount.

No, TIDIS HARDWOOD FLOORS CONTRACTING does not offer warranties.