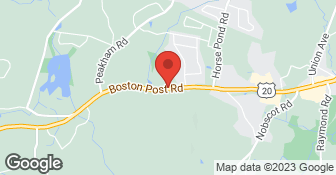 We complete exterior work only (No need to enter home)
We will wear masks and gloves when we visit your home
We will sanitize the workspace and all areas touched
We accept remote payment
All statements concerning COVID‑19 business operations and essential services are informational only, and are self‑reported and not verified by Angi.

With over 200 years of combined experience, we have the skills to deliver a quality home renovation for your needs. We do expert work and use only premium products from manufacturers such as Sherwin Williams, Benjamin Moore, California, and Cabot. Don't let just anyone perform your renovations. Our team of professionals is fully insured for your protection. Certificates of insurance are provided to clients and potential clients, upon request....

The entire staff, from office to carpenters and painters were very professional and completely thorough in their work! Very pleased with the results. I wish I hired them 3 paint jobs ago!

The two Target painters were careful, conscientious and courteous. They worked around my schedule. I would hire them again. (I did not enjoy paying 50% of the quote upfront when I signed the contract several months before the work actually started.)

I can’t say enough about them, pleasant polite professional! They left their boots by the front door as to not track in and out, everything was carefully protected. They did a beautiful job our space looks so fresh and updated. We had a hard time nailing down a date initially, they were pretty busy when we contacted them for a time frame, but we didn’t have a specific date in mind and it didn’t matter to us when the project got started so to us it didn’t matter. They don’t have a giant crew which means you can trust in their work and not worry about subcontractors doing the actual work. They sent us large format paint samples from our top three choices which really helped narrow down the color and not have to rely on those tiny paint swatches from the hardware store. I’ve never hired anyone to paint before, but this job was just too much for me to tackle, they came in and got it done in one day. From the initial consult and quote, to the painting guys, we couldn’t be happier. Our quoted contract was clearly defined and the price remained the same, they even separated a secondary quote for some bathroom and ceiling work to be done at a later date. They delivered on their exact word. They even left us the leftover paint for down the road touch ups. We will most certainly be calling them again. One thing worth mentioning was our contract did say they would move necessary furniture to accommodate the painting but we decided to just move everything ourselves the night before so they could just get right to it. We’re able to move stuff around so we just got the spaces extra ready so they wouldn’t have to deal with shuffling furniture around when they got there.

Very pleased with Target Painting. I needed the interior of my home painted ASAP, and, they made it happen. Lucas did the estimate. The next Tuesday, Paolo did the wall prep. (Both were very nice young men. Very approachable and easy to talk to.) Three days later it was done. And it looks Beautiful!!! I am so happy. Would definitely use them again. Also, a big shout-out to the ladies in the office for their help with the contract and in choosing the right shades of color. They were very patient with me which I appreciated.

We were very pleased by the work done by the Target Painting crew to take our house exterior from chipped and tired-looking to totally fresh. Each phase of the process was handled with great professionalism and a clear understanding of what it takes to do the job right. Gabriel, Braga, Alex, and the rest of the team made the experience very comfortable, and they worked hard every day until the project was completed. Jayleen and the rest of the office staff provided information and answered our questions in a friendly and efficient manner all the way through. When we're ready to do work on the interior of our house, we know who to turn to.

Thank you! It was a pleasure working with you and we look forward to working for you again in the future.
5.0

I was very pleased with the work that they did. Our project had a lot of rotted wood. They replaced all of the rotted wood and during the project, if they found more instead of painting over, they fixed it. Whenever there were any issues, if we brought them up, they would correct/fix no problem. The workers were nothing but nice. Always smiling and considerate. Honestly, was kind of sad to see them go in the end. Would highly recommend them.

Description of Work
House, porch, and garage painted and carpentry

It went very well. The painters were punctual and did a great job.

Description of Work
interior paintings of 2 rooms and 2 ceilings

They did a very good job, emphasize on the details. The crews are hard workers, came early and leave late. Overall. I think Target Painting & Contracting is one of the best companies to work with.

Thank you! We enjoyed working with you!
5.0

It was excellent. The people were nice, very neat, and cleaned up nicely. I would hire them again. They did a really good job painting.

Description of Work
They painted a retaining wall.

Thank you, it was a pleasure working with you!
5.0

Target Painting did an outstanding job replacing the Fascia Boards and painting full exterior of our house. They were very professional on all stages of the project starting from the planning to the final walk through. The crews were always on time, very professional, efficient and friendly. The company is a please to work with from the office and production managers to all the painters and carpenters. I am giving them the highest score and would highly recommend using them.

Description of Work
Replacing the Fascia Boards and painting full exterior of our house.

Thank you! It was a pleasure working with you!

Target Painting & Contracting Inc is currently rated 4.9 overall out of 5.

No, Target Painting & Contracting Inc does not offer a senior discount.