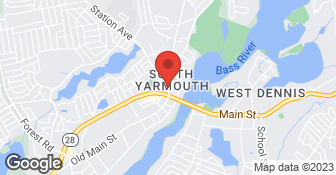 I liked George, he had a vision of what he wanted to do, when he called us down to his office and showed us his latest plans he put the bedroom in the front of the house. I spent over 6 mos telling him I wanted the house to flow with a transitional flow, many homes I have seen on the cape have been chopped up, I did not want that. I also told everyone I wanted the kitchen in the back, the very first time I met him told him the last person I hired put the kitchen in the front of the house, not sure why he did not learn from this I thought I was making myself clear. Also found him about 20$ thousand above the other person I was working with. I also did not like the kitchen person who was going to plan this out, I really needed to shop around, my family had done remodeling and had a list of places I wanted to try.

Description of Work
Estimates and plans.

I found him through the church I go to. He has a staff of carpenters and people like that. He has an independent plumber and a electrician that he uses. This is not the first time we hired George Davis Inc designed. We've been using him a fair share through-out the years. He's done a kitchen renovation for us, re-did an existing bathroom. The people that he has working with him are excellent. He's very responsive to changes we'd like to make after the project was started. The attitude was positive. We will use him in the future.

Description of Work
George Davis Inc designed and installed a bathroom the house.

2020 Super Service Award winner on Angie's List! Connell Roofing has been installing, maintaining and repairing residential and commercial roofs since 1956. We have perfected the trade over 3 generations and are proud of our reputation in the industry. We pride ourselves on a clean and professional install with service and warranty to back it up. You will not be disappointed when re-roofing your home with Connell Roofing.  …

As well as being an Angie's List Super Service award winner, specializing specifically in metal roofing, East Coast Metal Roofing is the only authorized Permalock distributor/installer in Massachusetts, Connecticut, Rhode Island, and Southern New Hampshire. Since 1948, PermaLock aluminum shingles have been protecting and beautifying the most important investment of many Americans – their home. For over 65 years, customers have avoided the expense of re-roofing and enjoyed the distinctive beauty of a roof system carefully designed and warranted to last a lifetime.  …

From renovations and new builds to decks, roofs and siding, Muto does it all. We're a locally owned business with deep ties in the community. We pride ourselves on honest work, excellent relationships with our clients, and quality results.  …

All statements concerning insurance, licenses, and bonds are informational only, and are self-reported. Since insurance, licenses and bonds can expire and can be cancelled, homeowners should always check such information for themselves.To find more licensing information for your state, visit our Find Licensing Requirements page.
General Information
Free Estimates
Yes
Eco-Friendly Accreditations
No
Payment Options
Check
Senior Discount
No
Warranties
Yes

George Davis Inc is currently rated 4 overall out of 5.

No, George Davis Inc does not offer eco-friendly accreditations.

No, George Davis Inc does not offer a senior discount.