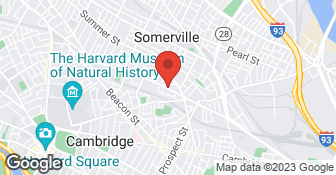 Description of Work
Attempted to fix a leak on my deck.

I had a very good experience with them. I went with them because they were referred by a structural engineer who I had done some drawings for the work. He had some work done by them before and they did a good job. The price was good. The price was the most reasonable of all. They were very nice. They were flexible. They came when they said. They did a very good job. They finished when they said. They cleaned up very well. Everything was good. I would use them again in the future.

Description of Work
All Seasons Home Remodeling in Somerville came out in December and reinforced a porch.

Of two experiences with this company, this was the good experience. The owner came out, gave a quote and discussed all options regarding the tile and wall work. The tile crew came out and were finished within a day. Tile was recovered from the interior side of the wall partition removed and used to mask the former partition joints within the room's wall.

Description of Work
re-tiled a master bathroom shower and removed a wall enclosing the upper 1/3 of the shower stall, opening up the shower to the room. The tile grout had been decaying and leaks were occurring to the unit below.

We were not very happy with the way the work was completed. The demolition crew did not cover our furniture or the hardwood floors, nor did they clean up after themselves. The place was such a mess that we had to move out of the house for about a week and hire a professional cleaning service to clean up. To their credit, all Seasons did remedy the situation. They sent a floor refinisher to fix the floors, and they paid the $200 for the cleaning service, though it took a nasty letter and several phone calls to get to that point. While the end product is pretty good (the plasterers were much better than the demolition crew), it was a huge hassle. Teresa in the office is very responsive and pleasant, but the same cannot be said of Gary.

Description of Work
All Seasons replaced the ceilings in the entire second floor of our house (4 bedrooms and a hallway) and the living room/dining room downstairs. This included demolition of the existing acoustic tile or popcorn plaster, installation of blueboard, and plastering.

The workers were nice, hard-working, & on-time. However the management was unprofessional & quality of work lacking. We hired ASR to "refinish our basement". So we were surprised to eventually learn this did not include painting drywall, finishing woodwork, or padding the carpet. Gary offered to add painting for $800 more; when I called back to accept, the price became $1200. We declined. After the first week, they claimed to have finished all work and clean-up (except the carpeting). Yet we found at least a dozen glaringly unfinished or sloppily constructed items. Nonetheless, Gary pressured us (early) to pay in full! The place, inside and out, was a mess, including grout & plaster spilled on the driveway, grass, & siding. The workers promised to come back Monday to clean up, but did not. The mess sat for a week; Gary would not return my calls. In the end, much of the cleanup was done by the condo association (we were fined) & us. It took us another 3 weekends to finish the work.

Asked for an estimate and they were very prompt in accommodating a date and time and was on time. I am sure they can do acceptable work but their price was more than three times the estimates of everyone else. Seemed Far too expensive.

Description of Work
We could not accept their extreme cost.

They do what they are supposed to do. They do not come on time, they don't want to work, if the other contractors have not performed their work. It is frustrating, because their are other rooms they can do.

Description of Work
They replastered most of the rooms in our second and third floor.

WE AT ALL SEASONS HOME REMODELING WOULD LIKE TO THANK YOU FOR YOUR REVIEW OF OUR COMPANY IN ALL ASPECTS OF WORK. WITHOUT SUCH REVIEWS, WE CANNOT IMPROVE ON OUR SERVICE AND STRIVE TO MAKE OUR RELATIONSHIPS WITH OUR CUSTOMERS’ ONES WHERE THEY WILL CALL US BACK TIME AND TIME AGAIN. THEREFORE, IT IS OF THE UTMOST IMPORTANCE THAT WE TAKE THESE MATTERS SERIOUSLY, ADDRESSING EACH AND EVERY ISSUE TO IMPROVE ON IT. OPEN LINES OF COMMUNICATIONS BETWEEN THE CUSTOMER AND ALL SEASONS HOME REMODELING ARE ALWAYS ENCOURAGED SO WE CAN ADDRESS ANY SUCH ISSUES, TO AVOID ESCALATION AND AVOID THE SAME MISTAKES IN THE FUTURE.
5.0

I obtained three estimates for this work that were all comparable in amount. I chose to hire Gary Mercer and his company because he was excellent at scoping out the project and proposing work that was realistic without trying to sell me on any extras. For example, the other companies recommended changing out the three windows in the room and installing flooring. Gary, on the other, hand said that finishing the floor should be put off until we were sure that the repointing and waterproofing of the wall was successful. i.e., that we should put the wall through the test of some rainstorms before we installed a new floor. The workers were all very pleasant and professional. The only criticism regards punctuality. Out of a total of 6-7 days worth of work, the workers were late on 2-3 of those days, once by several hours. The brick wall has held up well to the rain and snow of the winter. We can recommend this company for general contracting/renovation with confidence.

Description of Work
We have a 200 sq ft unfinished basement room (used to be a large crawl space) in a 100-year old brick building. It needed a number of repairs falling into the categories of: 1) masonry work: most importantly, the brick and stone wall needed to be repointed because the mortar was crumbling and letting in some water. The mortar was repointed and a waterproofing paint was applied. 2) plastering: the old plaster ceilings had large holes in some areas and did not extend all the way to the main house (such that you could see building wires through a couple floors). New blueboard was installed on the entire ceiling, and subsequently plastered. 3)walls/carpentry: the walls also had a couple holes and gaps that needed to be filled. 4) trim carpentry: for the door to the room, that had a gap all around it because no trim had ever been put in.

Family owned and operated, Capuano Construction has specialized in masonry work since 1956.  …

Bonded
Insured
All statements concerning insurance, licenses, and bonds are informational only, and are self-reported. Since insurance, licenses and bonds can expire and can be cancelled, homeowners should always check such information for themselves.To find more licensing information for your state, visit our Find Licensing Requirements page.
General Information
Free Estimates
Please ask for details
Eco-Friendly Accreditations
No
Payment Options
Check
Senior Discount
NO
Warranties
Labor 1 year; other - manufacturer's warranty

How is ALL SEASONS HOME REMODELING overall rated?

ALL SEASONS HOME REMODELING is currently rated 3.1 overall out of 5.

What days are ALL SEASONS HOME REMODELING open?

ALL SEASONS HOME REMODELING is open:

What payment options does ALL SEASONS HOME REMODELING provide

No, ALL SEASONS HOME REMODELING does not offer free project estimates.

No, ALL SEASONS HOME REMODELING does not offer eco-friendly accreditations.

Does ALL SEASONS HOME REMODELING offer a senior discount?

No, ALL SEASONS HOME REMODELING does not offer a senior discount.

Are warranties offered by ALL SEASONS HOME REMODELING?

No, ALL SEASONS HOME REMODELING does not offer warranties.

What services does ALL SEASONS HOME REMODELING offer?