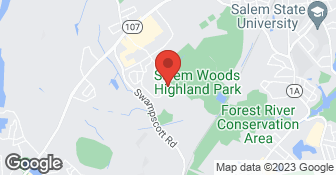 8 Points Home Inspection provides residential and commercial property inspections for buyers and sellers of real estate. Dave Riddle, owner and chief inspector at 8 Points, is an ASHI certified home inspector with the American Society of Home Inspectors. Dave is one of only a few in the state who is also certified through NRPP as a Radon Measurement Professional. When you want one of the most qualified and experienced inspectors to help guide you through a detailed review of your home, consider hiring 8 Points Home Inspection

Dave was great to work with. We were looking to buy a home while we were out of town, so we weren't able to attend the inspection. Dave was very quick to respond and fit us in on a weekend. Since we couldn't go to the inspection, he had a video call with us to walk us through the main results and then sent over the detailed report. He explained things very clearly. He was very thorough.

Dave was great! He was professional and responsive, it was easy to set up an appointment. During the inspection, he explained everything he was doing and encouraged me to ask questions and take notes. I learned a lot about the place I'm buying, including what needs regular maintenance once I own it. Dave is also incredibly friendly and quite intrepid. (You couldn't have gotten me to climb into that crazy ceiling.) We laughed a lot while going through everything. My realtor loved him and will be using him regularly going forward.

My fiancée and I are purchasing our first home and we just had Dave perform an inspection on a 179 year old house. Dave was amazing - I reached out to him due to his stellar reviews and I can definitely echo all the sentiments for his performance on our own home inspection. I called Dave when I was still in the process of shopping for an inspector and he spoke to me for a good 10-15 min about his inspection process and our potential home. Dave is AARST certified which means he can perform active radon tests to get a better snapshot of radon levels. He is also a certified wood destroying pest inspector and we asked him to include both of those services during our own home inspection. Dave coordinated with my realtor to drop off his active radon monitor at the property 3 days prior to the inspection and we were able to get 3 days worth of data for the radon test. On the day of the inspection, he was there early - inspecting the exterior and roof. When we got there, we followed Dave around as he explained his various observations around the outside of the house. He climbed onto the roof to inspect it, making lots of notes and taking lots of pictures that were later included in the report. Being first time home buyers, my fiancée and I have a lot to learn about taking care of a house and Dave was excellent at providing information and detail on the maintenance that needs to be done for each of the different parts of the house. Despite the heavy research I did prior to the inspection, I was learning something new every step of the way. Dave is incredibly thorough and takes his time to inspect every element and detail. He is quick to point out any potential problems as well as any opportunities for improvement. Our inspection was very interactive - Dave did an excellent job of making sure we took notice of any issues he found and explained things well if we were having trouble understanding. The report was very thorough, complete with an interactive table of contents for the all the different parts of the inspection. The report includes detailed pictures that were taken during the inspection and they were even edited to point out and highlight certain issues , including footnotes and captions. One very cool feature of Dave's website is that you can export all the issues he noted into a repair list that could then be included as an addendum to the purchase and sale, for example. He also took some very cool 360 degree pictures of every room that we've been using to further study the house and layout of the rooms. Thanks to Dave's attention to detail, we did find a structural issue with the property. During the inspection of the basement, he noticed that there was a section of sill that was obscured from view with a newer piece of lumber that was screwed in. Dave noted his concern about what was behind the lumber and suspected that the sill was rotted behind the newer wood. Dave did his job perfectly here - it is not his job to remove the lumber to further inspect the damage, but to flag this potential issue for us. Because of this finding, we were able to communicate the issue to the sellers who said that they would have their contractor investigate and address it. Dave's findings were invaluable to us because we are now aware of this potential problem and can build in a repair clause into our contract to protect ourselves in the purchase of the property. I would recommend Dave to anyone who needs a great home inspector with lots of attention to detail. Dave is thorough, extremely knowledgeable, and very personable. My fiancée and I had a pleasure working with him and despite the one structural issue, we still left the inspection feeling at ease since I felt confident that we went over every single part of the house. We even have a list of projects for things we would like to do based on Dave's notes and suggestions. In regards to the structural issue - Dave's due diligence may have potentially saved us tens of thousands of dollars in work, and for that I will always be thankful. If you are buying a house and don't want any issues to catch you by surprise down the line, I highly recommend Dave. I would especially recommend him for first time home buyers since he is so good at explaining everything and because his reports are so detailed and inclusive.

Dave was able to schedule the inspection for the next day. I was highly impressed. This was by far the most thorough home inspection I’ve ever seen. He was also great at explaining his observations as we walked through the house together. His follow up report was highly detailed and illustrated with photos to help explain everything. Highly recommend.

Description of Work
Hired 8-Points to perform a home inspection while negotiating to purchase a home.

I was so impressed with Dave on the first home inspection that when the deal fell through on the house, I hired him again for second house. Dave is personable, professional and worth every penny. I can't recommend him highly enough!

Dave was fantastic! Not only was he punctual (he actually arrived at the property before I did and performed a preliminary inspection on the outside) he was very thorough, methodical and took the time to explain things in detail and answer every question that I had. Ultimately we didn't end up purchasing the property due to the number of issues Dave uncovered and it was money well spent considering the tens of thousands of dollars we would have found ourselves putting into the home repairs. I was so impressed with the level of service he provided that I'm hiring him again to do an inspection on another home we've made an offer on.

We have over 20 years of experience in building consulting, home inspection & teaching. We offer clients an inspection that is thorough & that will help them understand a building's strengths, problems & repair needs. We are 11 year Super Service Award winners beginning in 2010.  …

We are the preferred disaster restoration, clean up and home remodeling company for Massachusetts homeowners. We stand behind every job we do. Please contact us if you want our team to get to work for you. We'll be on our way to get started.  …

Insured
All statements concerning insurance, licenses, and bonds are informational only, and are self-reported. Since insurance, licenses and bonds can expire and can be cancelled, homeowners should always check such information for themselves.To find more licensing information for your state, visit our Find Licensing Requirements page.
General Information
Free Estimates
Yes
Eco-Friendly Accreditations
No
Payment Options
Check, PayPal
Warranties
No

8 Points Home Inspection is currently rated 5 overall out of 5.

No, 8 Points Home Inspection does not offer eco-friendly accreditations.

No, 8 Points Home Inspection does not offer warranties.