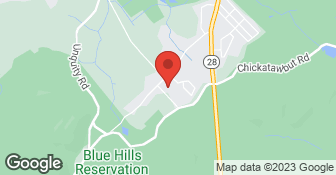 Our six acre, family owned farm has been growing exceptional & sustainable plant material and offering high quality landscape supplies & services since 1965. Each year we work toward attaining our dream of creating a place for people to come and enjoy the beauty of gardening and a place for people to get ideas for their own gardens by viewing the plants in a natural setting. We also provide residential landscape design and landscape installation services. Our projects range from a single tree planting to a complete landscape renovation.Rooms without walls can transform your outdoor spaces. Using specimen plant materials, we design, install, and maintain landscapes that concentrate on incorporating the beauty of the natural surroundings as well as practical ways to solve individual needs....

Once it got started, it went well. My review deals with the key lows in the way business is conducted.

Description of Work
Landscaping on small side yard.

Josh Oldfied is a true professional. He is an expert on cultivating plants and bushes. He used his scientific knowledge to explain to me what was best for my home and area that I live in, in respects to wildlife. He also has an expert eye on how the plants and bushes should be placed in terms of design, house placement and height. He took our vision and made it even better than we expected! His team was extremely professional and hard working the entire day. They were very meticulous on placement. I truly appreciate Josh Oldfield and his team for a wonderful experience. We are very happy with the results. I look forward to do more business with Thayer Nursery (Milton, MA) in the fall to implant more trees around my property. I highly recommend Thayer Nursery and Josh Oldfield for landscaping.

We hired them last year to install 10 mature pine trees and redo our lawn. 4 of the trees died almost immediately, and it took them over a year to honor the warranty. After 8 months of unanswered emails and calls they finally replaced those trees, but left another clearly dying one in place. As for the lawn, it never grew in and I had to threaten to take them to court before they tried to fix it. After all that, I still had Nicholls Landscaping come in and re-hydroseed. Stay away.

Their firewood is extremely dry, clean, high-quality and well split. Extremely promptly delivered, neatly stacked, and the delivery person went to extra trouble to give me extra pieces on the small side since I am a single mother and have to split and handle all my wood myself. They were a PLEASURE to work with by phone and in person. Most firewood delivery companies are run by brusque or downright rude people who don't even pretend to try to provide good customer care. Thayer is the absolute opposite. Their prices are a bit higher but the quality of the product and of the service experience is more than worth it. I've been burning the wood all winter and it's a (dry, seasoned) joy to burn.

Beautiful! Josh's crew is hardworking and thorough. Josh is not great at communications, but will get back to you if you leave a message or contact the office and leave a message with Lisa. I did wait for him to contact me on occasion, or for his crew to show up on occasion. Communications could be better. But Josh knows landscaping, is a nice fellow to work with, is enthusiastic about his job.

Josh Oldfield never returns calls, entices you with a much lower rate if paid in full up front, and doesn't stand behind his work. I paid him over $8,000 to install some large arborvitae and just over a dozen small rose bushes, and install peastone from the street to my fence line. I paid him up front because he lowers the price of his already too expensive work. That's my fault, lesson learned. Should've turned him away as soon as he mentioned that deal. Anyway I paid him and he said he would be about 3 weeks out. After 3 weeks I called to check what was going on, no answer. Over the course of next 2 weeks I called and left dozens of messages with no answer. After about 6 or 7 weeks I get a call saying they'll be there tomorrow. Through the course of the work they wanted to drive HEAVY equipment through my front yard into the back yard and I said absolutely not. I don't want my yard ruined. I left to do errands and came back couple hours later and they drove them on the lawn anyways. And I mean one of them was a big dump truck. Their answer to this was, "someone was supposed to call you and tell you, we'll fix anything we ruin after, don't worry". OK! So when the job is done, none of it is fixed. So now starts more phone calls that nobody answers and more messages that nobody returns. When they finally came back out all they did was throw dirt over their huge tire tracks, no seed. And the dirt was consistency of powder so most got blown or washed away. Still left huge indentations in lawn. Then came the rain and the flooding. The dense pack underlayment under the peastone was graded incorrect. It was graded from the street down into my yard. The back of my property is now a swamp everytime it rains. That area is where I cleared out all the vegetation and put up a fence 7 weeks prior to them doing the peastone. In that 7 weeks it rained A LOT. And it didn't flood once till they did the dense pack underlay. It rained so much so that this was the excuse they gave me as to why it took 7 weeks to get to my job. So I called for weeks again leaving messages about the flooding, when Josh finally called back he said he'd look at it tomorrow and send the guys back on Saturday that week to fix it. That was over 2 weeks ago now. And I've left several dozen more messages with no answers. So needless to say I'm going to have to take legal action for this one. Do yourself a favor and stay away from this company.

Description of Work
Landscaping, installed 19 trees, 18 bushes and a large area of peastone.

Love how easy it is to get firewood from Thayer Nursery when we need it. We have to load it into the car ourselves, but we don't get a ton of wood at a time, so it works out well. Their hours are convenient (even open on sundays) and the wood has been great quality. They also deliver wood, but we just moved in so we wanted to wait and see how much we actually go through before having a big delivery.

Poor communication. Josh was more than 1 hour late for his scheduled appointment and never communicated that he was running behind.

Description of Work
Requested a design to plant a privacy screen. Expected to hire Thayer to do the work.

They did a good job on removal and planting. The problem was they kept postponing the job, so the trees were planted in the height of the hot summer last year. We had to be religious about watering constantly which we did, so the trees survived. There were two bushes which died. I informed them this past spring and am still waiting for replacements. I have called numerous times and left messages on their machine and haven't heard back- I am very frustrated after spending all that money.

Description of Work
They removed dead trees, shrubery, vines etc. in my backyard and replaced it with 19 large arborvite trees and other shrubs. They then mulched.

This nursery is top notch and best in the area. The prices are great and the people that work there are very knowledgeable. Dont go anywhere else to buy stuff for your landscaping!!

Description of Work
They dropped of trees, shrubs and mulch that we had ordered. They gave us way more than the yard of mulch we ordered the worker even dug holes and installed the shrubs for us for free! He was amazing and have us all kinds of tips for keeping the beds and plants healthy. I love this place!

We have the know-how to tackle everything from the smallest of repairs to large-scale projects. No matter the size of the job. We always work hard to ensure our clients are completely satisfied with our work.  …

We have the experience and dedication to bring your dreams to reality! We guarantee your satisfaction with are speciality masonry skills Call or click to schedule a free estimate today!  …

2015, 2016, 2017, 2018, 2019, 2020, 2021 WINNER of the Angie's List Super Service Award! Over the years, we have expanded our capabilities and services from residential and commercial landscape maintenance, to design and installation of lawns and plant material. We are experienced in hardscape design and installation. From retaining walls to walkways, custom driveways, patios, pool decks and more. We offer a variety of ways to improve the appearance, enjoyment and value of your property. As always, quality craftsmanship and service are our top priorities. We are certified in the installation of high strength concrete pavers and retaining walls providing a wide range of products to suit all styles and design requirements.  …

We are a full service Nursery / Garden Center that has everything you need to get growing and help you enjoy your outdoor living space. Our GARDEN CENTER has all the plant material you need to fill your beds with year round color and interest. From seasonal annuals, veggies and herbs to perennials, flowering shrubs, evergreens, flowering trees and shade trees. And our KILN - DRIED FIREWOOD will keep you warm during the winter while you flip through the catalogs and day dream of spring.

How is THAYER NURSERY overall rated?

THAYER NURSERY is currently rated 4.5 overall out of 5.

What days are THAYER NURSERY open?

No, THAYER NURSERY does not offer a senior discount.

Are warranties offered by THAYER NURSERY?

No, THAYER NURSERY does not offer warranties.

What services does THAYER NURSERY offer?

THAYER NURSERY offers the following services: We are a full service Nursery / Garden Center that has everything you need to get growing and help you enjoy your outdoor living space. Our GARDEN CENTER has all the plant material you need to fill your beds with year round color and interest. From seasonal annuals, veggies and herbs to perennials, flowering shrubs, evergreens, flowering trees and shade trees. And our KILN - DRIED FIREWOOD will keep you warm during the winter while you flip through the catalogs and day dream of spring.