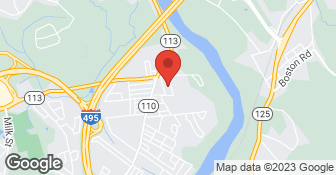 Michael J. Hamel Licensed Electrician specializes in electrical services. The business services include but are not limited to electrical installation, maintenance, upgrades and repair....

Michael arrived on time, explained what he needed to do, estimated his time & materials for the job and went to work. Job was done timely and cost less than I expected. He saved me money by utilizing existing fixtures, too.

Michael was great to work with! He was easy to contact, showed up on time, and was reasonably priced. We had an issue with National Grid and Michael waited outside until National Grid showed up. He wanted to make sure our issue was fixed as quickly as possible, which was greatly appreciated. I will definitely use Michael’s services again in the future!

He came in and diagnosed the problem right away. Pretty simple job. In and out.

Description of Work
Had a couple of outlets malfunctioning

Great job! Michael was on time, courteous, professional and his price was excellent! I would definitely recommend Michael Hamel!

Never performed the service. Had himguve me estimate never emailed me, told me he would be back to do outlet never got back to me

Have you hugged your electrician today? Neither have I, actually (he’s happily married), but he’s so AWESOME that I want to. Mike installed several light fixtures and ceiling fans for me, upgraded my existing smoke and CO detectors to current standards, installed heat detectors in my garage, and installed smoke/CO detectors in my bedrooms where there weren’t any. Some of this work was not easy given the way the house was built. Mike took extra care to come up with a creative solution to install the heat detectors that took him longer than expected but required minimal drilling of holes in the ceiling. And when he left, the rooms where he worked were cleaner than when he arrived. His original written estimate – which was very fair and reasonable -- was the price I paid for the work, even though it took him longer to finish than I think he originally expected. Mike is professional, polite, and he fixes it right the first time. I’m delighted to have found an electrician with integrity whom I trust implicitly to do the job right at a fair price. I’ll be using him for all my electrical projects – you should too!

Mike showed up right at the agreed upon time. Professional. installed switch and left work area clean. Called shortly after leaving to remind me to change FIOS back to original outlet. He was VERY thorough. Price was competitive with other quotes, and what friends have paid. Almost forgot. I overpaid in final installment. Mike called right a few minutes after he left and brought to my attention. Much appreciated! I recommend him. Will use again for future electrical work.

We hired Mike again for more work in our home. We were renovating the bathroom and he updated the electricity there as well as added new wiring for a heated floor and new light fixtures etc. Once more, Mike was pleasant, reliable, efficient and thorough, and very reasonably priced. We would definitely recommend him and we will call him in the future for more work.

Description of Work
Updated electricity and some new work

Thank you for the positive review. It was a pleasure doing business with you again.
5.0

Mike has done work for me in the past and has always been fair, efficient, professional and done great work. He comes prepared, unlike a lot of tradesman who show up at your house and then have to go to the store to get the materials. I believe his goal is to make his customers happy.

Very polite and professional. Had a number of things done: 1. Replace a high bedroom ceiling fan 2. Replace 4 switches (with complete re-wiring for one of them) 3. Replace a chandelier He did a great job, was super nice throughout the whole thing... Not only would I hire him again, I already have scheduled him for another visit as there are a couple more projects I need done. A+!

A. Adames Electrical Services provides general electrical services and repairs in the Lawrence, MA and surrounding areas. We're owner operated and dedicated to customer service. We won't leave until you're satisfied! Please call us or click for an estimate today!  …

At Wallace Electrical Co., we prioritize customer satisfaction above all else. This means that our team of professionals will always go the extra mile with our electrical services to make sure that your experience with us is like no other. ||Address: 1 Tech Valley Rd, #2302, Westford, MA 01886, USA  …