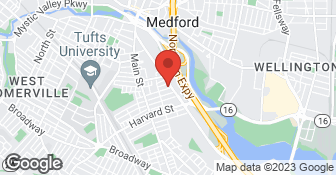 Krank It Up was established in 1993 - We offer a wide variety of services from basic stereo installation, to high-fidelity audio setups. We are your mobile electronics headquarters! From Marine Audio, to basic amps and subwoofers - we're your shop! Our specialties include Alarms, Remote Starters, Radar Detectors, iPod Integration, Window Tinting, HID lights, Custom Fabrication, GPS tracking, GPS Navigation, Electrical Troubleshooting, Classic Car Audio, Motorcycle Audio, and more! We only carry the best products and offer the highest quality installation and service....

Description of Work
They put in new front speakers and a booster. Turns out the booster amp was improperly sized to the speakers and it failed. Eventually they gave me a proper amp at no additional charge. The sale was handled by the son and it was the old man who got things straightened out.

Excellent Service for a good price. They quoted me a price the day before and then gave me a better deal with a better auto alarm system when I showed up for the appointment. They did the entire job in a very professional manner and in very little time considering removing the old system and installing 2 new systems. I would recommend this service to everyone.

Our Honda Accord radio/CD player was occasionally dropping out with a loud popping noise, and then not working for several minutes or several days. Krankitup was able to narrow the problem down to the radio and then remove the radio and send it out for repair. It has since worked fine. When the radio is reinstalled, we realized that one of the rear speakers had blown and replaced the rear speakers as well.

I bought a new car and it did not come with a feature that allowed a Sirius/XM radio to be placed internally. I called and made an appointment. They started right on time and even brought me back to make sure I would be happy with the placement of the head unit. They hid all the wires and ran the antenna properly without any trace anything was done to the car. They did it under 1 hour and gave me a little discount because it was quick for them to do. They are friendly and had coffee and donuts while waiting for the head unit to be installed.

Description of Work
I had a new Sirius radio put in my car, hooked up to the factory installed stereo and they mounted the antenna to the back of the car.

Past work I have had done here included the install of aftermarket car stereo and Viper alarm on my old Camry, and then a Viper alarm with remote start on the 2011 Sienna that replaced the Camry. Based on my positive experiences over the years with Krank it Up, I spoke on the phone with Fawzi about some ideas I had in mind for tweaking the vehicle's electronics, and then made an appointment for the work to be done about a week later. On the appointed day I showed up (somewhat late, around 10am) with a writeup of various further thoughts I had had about the work, and some photos to illustrate how I wanted to use the trickle charger in my driveway. Dana, who would do the work, and Fawzi who owns the shop, both looked over the writeup and photos and after some discussion of various possibilities and tradeoffs we came to agreement about how things should get done. As I had hoped, they came up with a good way to achieve the desired results with maximal safety and reliability but without spending more of their time (and my money) than necessary. With custom work like this I did not even ask them to quote a price up front, but from my experience with this shop I had the sense they would do it professionally and not try to run up a big bill. I left the vehicle with them for the day. Around 2:45PM my phone rang; it was Dana telling me the work was done. I got to the shop by 4PM. It turned out that the labor charge was less than 2 hours, which I thought was quite fair. As I was admiring the work in the parking lot, Dana came out to show me the various features of it, and show me the location of the fuses he had installed to keep things safe. The added wiring looks really professional, and everything is working as hoped.

Description of Work
I went to Krank it Up this time for some custom electronic work to get things just right in my 2011 Sienna: 1) Add a fused convenience connector on the front of the vehicle to allow trickle charging the vehicle (which does not get driven enough to charge its battery). 2) Relocate the alarm indicator LED to a more prominent position visible from all directions outside the vehicle. 3) Install my 400 watt 120VAC inverter to provide AC power in the vehicle.

Blue Moon is a installation company for drapes, shades etc. We guarantee your satisfaction and we won’t leave until the job is done right. We pride ourselves on the quality work we provide, while delivering great customer service! Check out our services offered and call or click to schedule a estimate today  …

At Aztec Sound and Communications, we’re proud to be a premium provider of residential and commercial AV installation and services throughout the greater Boston area and Massachusetts. Aztec Sound is committed to enhancing your quality of life with functional, reliable and easy-to-use smart home technology for your home or business. We are veterans in the business whose roots began with recording studio systems & designs - we know what's needed and how to make it hassle-free. Through our expert consultation, we'll help you discover the latest in home automation technology to turn your beautiful home into a truly smart space.  …

All statements concerning insurance, licenses, and bonds are informational only, and are self-reported. Since insurance, licenses and bonds can expire and can be cancelled, homeowners should always check such information for themselves.To find more licensing information for your state, visit our Find Licensing Requirements page.
General Information
Free Estimates
Yes
Eco-Friendly Accreditations
No
Payment Options
Visa, MasterCard, American Express, Discover
Warranties
Yes

Frequently Asked Questions & Answers about Krank It Up

How is Krank It Up overall rated?

Krank It Up is currently rated 4.6 overall out of 5.

What payment options does Krank It Up provide

Does Krank It Up offer free estimates?

Does Krank It Up offer eco-friendly accreditations?

No, Krank It Up does not offer eco-friendly accreditations.

Are warranties offered by Krank It Up?

Yes, Krank It Up offers warranties.

What services does Krank It Up offer?

Krank It Up offers the following services: Installation and repair of alarm, CD & MP3.