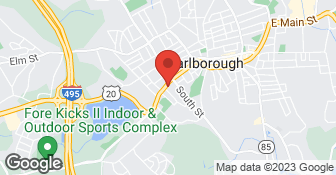 I contacted this guy asking for several estimates on home repair. He came in a little bit higher than the others, but I liked his demeanor and decided to hire him for installing a vent in my bathroom. We agreed that he would come do the work on September fifteenth. I called him on the fourteenth to confirm and got his voice mail. I left him a message asking him to call me back to confirm the appointment. He never returned the call and did not show to do the work. Terrible!

Description of Work
No services were performed because the guy didn't even show to do the work.

Services Plus has been helping people fall in love with their homes all over again since 2002. A growing company Services Plus recently expanded and opened a second office in Warwick, RI. As premier interior and exterior painters and carpenters, Services Plus specializes in forging connections with Southern New Englanders who take pride in how their home looks. Providing a hands-on customer service experience with knowledgable, hard-working crews, Services Plus is committed to giving clients a positive experience. When you begin a project with Services Plus, we work with you through each step of the process. At Services Plus, we understand the time, money, and effort that goes into repainting your home. Two decades of experience has informed the way that Services Plus approaches projects, so that each customer relationship begins with trust and understanding of our shared goals. With NO DEPOSITS, you do not pay Services Plus until your project has been completed. Request a free estimate today and learn more about how Services Plus has been helping Southern New Englanders fall in love with their home all over again, since 2002. MA Office: 508-309-7069 Office@ServicesPlus.net  …

It is the details that make a house a home. We will make sure that the first impression of your house counts. Give us a call today.  …

We specialize in residential exterior, interior painting and carpentry repairs. We have a fair prices. Greg's Painting was voted the best in Metrowest area for customer satisfaction in the last 5 years.  …

aj painting & carpentry is currently rated 1 overall out of 5.

Are there any services aj painting & carpentry does not offer?