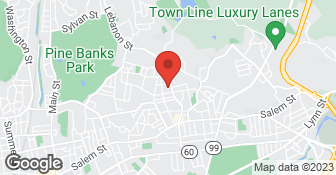 Connolly Floors is an award winning family business that is fully insured and committed to their customers. We have over 30 years of experience in customer service as well as the flooring business. Connolly floors was started in 2004 and has been offering competitive pricing and unparalleled customer service since day one. Travel charges may apply....

We had the hardwood floors in 2 rooms refinished and we had boards replaced and floors refinished in 2 hallways. We could not be happier with the results. The floors look spectacular. The guys at Connolly floor were professional, courteous, punctual and punctual. They finished the project on time, made sure to protect the rest of our house from dust as they worked and cleaned up everything after they were done. We highly recommend Connolly floors. The price is extremely fair and results are fantastic.

Jack and his installer did a great job on my project. This is the 3rd job he has done for me and I would hire him for any other floor projects I may need. Awesome service.

Excellent. They did a great job, and were very responsive to a request. I'm very satisfied with their work.

Jack Connolly is extremely competent, careful, and personable. He went above and beyond to identify and find the right reclaimed wood to repair the wood floor in our over-100-year-old house, to fit our job in on a tight time frame, and to protect other rooms from dust while he worked. He was more knowledgeable about wood identification and finishes than the other contractors we met with, and his price was very competitive. Make sure to ask him how to take care of your new or repaired floor; we were surprised to find that we should not put our living room rug back down for at least two weeks to allow the floor to continue curing (though it was okay to put furniture back in 48 hours). Highly recommend.

Jack and his wife are absolutely wonderful people. They gave me a price over the phone and was at my house just a few days later to start the project. I went with a 50/50 jacobean/ebony minwax stain over my white oak floors. About 1000 sq ft + staircase. I had them use Traffic HD water based poly. It came out really nice. Not only was he super friendly and patient, they were also extremely competitive with price.

It went wonderfully. The outcome was great and we would happily work with Jack and Michelle aagain.

Excellent. Floor was badly stained so a simple "restain" would not cover up the bad spots. So they suggested a solution that worked. I could not be happier with the work or dealing with everybody at Connolly Floors!

Great job, very nice guys, in and out in 3 days and didn't even know they were here.

We were very happy with how the project went. Jack and Michelle were very responsive to emails. The job took a few days and consisted of installing hardwood flooring in two awkwardly shaped and sized areas in our upstairs. The final product turned out great and we thought the price was extremely fair.

Connolly floors were excellent to work with, very responsive on both phone and email. We were very pleased with the results, especially in areas that were quite damaged. And there was very little dust to clean up after.

I contacted Connolly Floors to estimate removal of a rug and install a red oak hardwood floor. They got back to me quickly with the estimate and I contracted them to do the work. The price was good. They came on time every day and answered all my questions. They were friendly and do excellent work. They cleaned up every day and blocked off the area so no dust would go through the house. I plan on hiring them again to do my complete 2nd floor.

Overall Connolly Floors did a good job, and there were just a few frustrating fumbles. Pros: Connolly Floors was the only company that provided a PDF quote with a per sq ft rate as we reached out to a handful in the Boston Area. The owners were never hard to reach via phone or email. Despite a heavy snowstorm and cold weather, the crew made it out the next morning from a long distance away and didn't just cancel, though it understandably made them late. We had just purchased the home and didn't have an accurate sqft number for the project when initially quoting. After getting to remeasure, Connolly agreed to honor the lower sqft number, no questions asked which we appreciated. Cons: Their service was a bit more expensive than competitors, but again we felt better knowing it was a quoted rate, not a magic number. When the home lost power on what was supposed to be the final day of the job, they took off but never attempted to call us, so we ended up driving much more than needed, and would never have known our power was out. Things to consider as a client: As with any job, be proactive in communication and things could've gone better. Yes, your precious baseboards will be marked by the sander, but nothing so egregious it couldn't be fixed with paint alone. Overall the experience was fine and I'd recommend them as one option to quote among others.

Description of Work
Refinishing of a First Floor

They did a great job. Sanded and put 3 coats of poly on my living room floor and stairs to the 2nd floor. Floor and stairs look awesome. They were on time every day and took care not to get dust in other rooms by taping off those areas. All emails were answered promptly.

Description of Work
Sanded and refinished floor and stairs

It was done extremely well according to schedule and according to estimate. Will definitely work with again. Highly recommend for refinishing. Extremely satisfied with the job.

EXCELLENT. True professionals: first-rate work; terrific people to work with. One of the BEST experiences we've ever had with home projects. There's a reason they have such outstanding reviews. Here's just one more.

Excellent. Jack is responsive, fair, and customer friendly. He responded quickly to our request for a proposal. His price was very fair; perhaps more importantly, Jack suggested that we didn't need to do work we requested that he could have easily just done without question. For example, he said we only needed to refinish the 3rd floor rather than sand and refinish. He also said we didn't need to refinish the steps. We also added requests throughout the job and Jack tried his best to accommodate them. Overall, highly recommended.

The floors look great. There was some confusion about paying extra for staining the floors. Overall, they did an excellent job.

Description of Work
I had my hardwood floors refinished.

I can't say enough good about Connolly Floors. Jack Connolly's advice about which floors to sand and which to just screen was helpful and informed. He and his crew came right on time, every day. They did superb work, were friendly and polite and left everything clean and neat after each day's work. The floors in this apartment now look wonderful. Jack's price was lower than most estimates. I had a burned area on one floor, and Jack sanded it out so there's no trace it was ever there--instead of having to patch in new wood. I'll be recommending Connolly Floors to everyone I know, including my realtor and my friends who are realtors.

Description of Work
In an apartment, one floor sanded, other floors screened and refinished.

Great work! The work was done very quickly (much appreciated since we were on a tight move-in timeline) and was of high quality. Very responsive and professional. Prices per square foot were similar to others. Would certainly hire again (which we may have to after our painters ruined many places on our new floors..). Thanks!

Great- did a wonderful job. Prompt, professional and neat.

Excellent, the floors are beautiful

Jack and Michelle run a tight ship. This was the second time we had them back after a good experience with them refinishing our stairwells and hallways - a similar size job as this one. Their crews are always professional, punctual and open to any questions we have. They’re receptive to feed back and responsive if any issues arise. We will definitely hire them back to finish the rest of the house.

We had Connolly Floors in to refinish the hardwoods throughout the house. Even though every room had a unique issue (old-style finishes, a botched DIY project from a previous owner, wavy floors, holes drilled through for cable runs) they were able to fix everything and return our floors to their former glory. I've included a before and after picture to demonstrate how they were able to remove years of wear and tear. They were even able to get underneath the cast iron radiators without issue. Additionally, they provided amazing service ahead of the job - delivering samples of finish types so I could see how each application would look on the floors. Their advice was solid and Jack knows his stuff! I recommend them wholeheartedly for your next floor refinish project.

It was fine. It was great. My son used them before. They came and did the job on time and for the price they told me.

Description of Work
They redid the kitchen floors, resurfacing of hard wood flooring.

"Floor Installation, Restoration, Staining, Sanding & Refinishing. Want Your Floor to Look Shiny and New? Give Us a Call Today."  …

Professional flooring installation. We are a family team of three. We have been in the business for almost 20 years. We have also been a sub contractor for many major flooring companies. If you want great quality for less than the cost of other flooring companies, please give us a call. Our work is professional and we like to work with the customer. Our goal is to make your flooring last and look new. We also take pride in making our customers happy. Please give us a call. You can reach Gabriel at 781-759-2442 or email camposflooring@outlook.com  …

With over 18 years of experience, Queen City Floors would love to show you what type of craftsmanship can be accomplished through the service that is offered! We strive to help customers to fall in love with their floors again. Whether that may be through refinishing and sanding your current floors or installing new hardwood floors! Trained by one of the best floor specialists that the New Hampshire area has ever experienced, Queen City Floors offers products that have a high attention to detail while providing a quality product that can be enjoyed for years to come. From pickling or staining a floor and using some of the best finishes In the industry to installing a sound product into your home, Queen City Floors truly adds to the value and integrity of your home!  …

No License Required for Trade
Insured
All statements concerning insurance, licenses, and bonds are informational only, and are self-reported. Since insurance, licenses and bonds can expire and can be cancelled, homeowners should always check such information for themselves.To find more licensing information for your state, visit our Find Licensing Requirements page.
General Information
Free Estimates
Yes
Eco-Friendly Accreditations
No
Payment Options
Check
Emergency Service
Yes
Warranties
No

How is Connolly Floors overall rated?

Connolly Floors is currently rated 4.8 overall out of 5.

What days are Connolly Floors open?

No, Connolly Floors does not offer eco-friendly accreditations.

Are warranties offered by Connolly Floors?

No, Connolly Floors does not offer warranties.

What services does Connolly Floors offer?