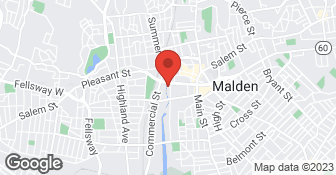 Alpine Landscape is a full service company specializing in Interlocking pavers and retaining walls. Started in 1985 Alpine is a leader in the industry offering the best warranty in New England ( 20 years ). Unilock, ICPI and NCMA certified All work is performed by Alpine WE DO NOT USE SUB-CONTRACTORS...

After frustrating, no-show experiences with another landscape company, we were very pleased to see how responsive Alpine Landscape was. We called them late in the afternoon, mid-week, expecting to maybe get a consultation visit that weekend. Imagine our surprise when they said "Hey, we're right down the street! Should we come over now?" Within an hour we had spoken with their representative and been given some suggestions on what to do with the roughly 3.5' wide space in front of our house. We had some ideas of what we wanted, but they had much better ones (we had thought to trim out the space with brick, they suggested cobblestones laid on the side - they look fantastic, and they'll last forever). We stressed that we were not in any rush, as long as the work was done before winter, so scheduling was not an issue. They showed up sometime in October and were done in two days, more or less. This included removing a VERY large bush, and cementing the cobblestones into place so they'll never move. They planted some nice perennials and laid down mulch. We are very pleased with the cleaned-up, attractive look, and would definitely call them again. Indeed, the back patio needs some work, and it will be Alpine that we call when we're ready to get to it.

Description of Work
Removal of a bush, selection and installation of plants, laying down of a stone border

Initially they were very good, but they were poor with follow-up. Their work is excellent, and since we were a smaller project for them, when the busy season came, it was hard for them to get to us. We are happy with how it turned out.

Description of Work
They did our front steps.

Family owned and operated, Capuano Construction has specialized in masonry work since 1956.  …

JML Construction Specialist in constrution, masonry, carpentry, demolition, remolding, full services. We have over 18 years of quality experience and we will build a relationship that will last a lifetime after you see our quality work. As a locally owned and operated business we feel invested in our clients and constantly strive for customer satisfaction.  …

No, Alpine Landscape Management & Const Company Inc. does not offer a senior discount.

Are there any services Alpine Landscape Management & Const Company Inc. does not offer?