B & B Pest Control 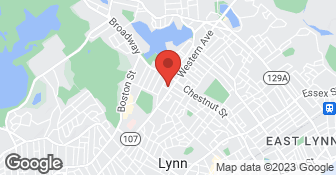 B & B Pest Control has been servicing the North Shore and Eastern Massachusetts for over 30+ years. Family owned and operated they have the best prices around and guarantee all their work. If you are looking for honest and fair pricing with great service, call B & B Pest Control today! B & B Pest Control eliminates and prevents termites, ants, carpenter ants, bees, hornets, fleas, bed bugs, mice, rats, silverfish, ticks, roaches and all other pests and wildlife!!...

As Human beings, they scored off the chart, I never had exterminaters come to a house that I was actually staying in. I didn't know what to expect. I did know that my mother's house was infested. She has dimentia, she's 90 years old and I would love to donate most of my time caring for her. The mice, unfortunately take up too much of my time, I'm always sweeping floors and moping them on average, twice a day. I'm sanitizing the kitchen table, counters, silverware drawer. Scrubbing these disgusting droppings up. You have no idea how hard it is to get up this brown, sticky residue that they leave behind. B and B pest control has been here 3 times so far The exterminators, all of them have agreed that my mother's house is being overrun by these rodents but to my surprise have not brought out their big guns. The first time the exterminator came he laid traps with poison inside of them. Also they put down several sticky pads. Two weeks later, there was absolutely no change in activity. I called them to come back 3 weeks later. I daw that the second time, traps with poison inside of them were checked and all the sticky pads were vacant. Then they used poisonous powder on some basement pipes and in a few indoor cracks, they also filled one inside holes. Both times an exterminator came out to my mother's house, there were no outside holes filled, not even looked for. They knew it was as infested as any house could be. It's just a one family home. The third time I called I didn't receive a call back, I emailed them but no return email was sent back. I called again on the following day and was told an exterminator would be sent out in four more days. The third visit from N and B pest control, I actually saw the exterminators, 2 this time and 2 exterminaters the second time The third time these exterminators used foam that I never saw used before and one exterminator went outside and filled in quite a few holes with foam, that was never used before they acknowledged how severe this mouse problem was and then used several poison food packets. I already gave a great review the first time they came out based on how unbelievably nice every single exterminator was and as I said. I didn't know what was supposed to be used and how much of it should be dispensed. It was frustrating to know that the first time, every tool for ridding these mice wasn't used. In between visits there is so much work that certain days I don't feel as though I can do it and it's everyday. I always keep a spotless house. These mice were worse the third time I called B and B and I'm not very optimistic that they can do the job and get rid of them once and for all. I'm praying and fingers crossed. I'm absolutely doing everything they told me that I should do. The employees are the nicest people you'd ever want to meet All three times they came out, they were right on time. My first review was based on that and believing I wouldn't have to be traumatised by these disgusting creatures anymore. I'm hoping the third time is a charm. The activity and mouse droppings are still as severe but this last time it's only been 5 days since they came. I really want to give them the best possible review I could ever give because of their personalities. It's not fair to those who are going through the same mosey as I am to base B and B on personal experience instead of how productive they are with ridding houses of unwanted pests. I'll give one last review in 12 more days.

Jerry was amazing, went above and beyond. Exterminators showed up on time, were pleasant and informative. They also baited and sealed suspected areas, very thankful for their knowledge. Highly recommend!

Sent email via Angies list and was contacted next day via phone to go over issue and setup Appointment for 11/26. The technician Rich arrived for the 3pm appointment 30 minutes early. Rich was very personalble and explained the treatment applications while he Installed 4 exterior bait stations, dusted/baited burrows and sealed them. So far so good. No new evidence of activity.

They baited and sealed suspected areas.

Description of Work
Evidence of mice.

Thank you very much for taking the time to leave a review. We appreciate your business and glad we could assist. All the best.
5.0

B and B was absolutely fantastic, showed up on time, clean, professional, friendly and got the job done. Very happy with there work and will continue to use them!

Description of Work
Bees in roof

Thanks so much for taking the time to leave a review. We pride ourselves in customer service. All the best. John, Owner
5.0

We just purchased a home and we used B&B to perform complete fumigation prior to move in. They are responsive, punctual and extremely professional. Its not every day you need pest-control, but when you do call B&B Pest Control. We are so glad we did. Thank you John, Jerry and everyone else we dealt with.

Thanks so much for taking the time to leave a review. We appreciate you using us and are just a call or email away should you need any other assistance with pests.
5.0

I had a significant bee problem above the overhang of my garage. I found B&B online and called where I was immediately greeted by a friendly and helpful technician who booked me the first appointment the next day (which was a Saturday). The technician arrived ahead of schedule and immediately solved for the bee issue. I have not had an issue since. Thank you B&B!

I remember this one! The bees took over the garage. But we got 'em! Thanks for choosing B & B Pest.
5.0

Working with B & B Pest Control to fix my ants problem was truly a worthwhile experience. The response time from initial contact to the first visit was shockingly fast. Not only were they able to eradicate the problem but the team provided

Description of Work
I needed to have ants remove

I found B & B on here and sent them a message which they returned very quickly. I had a problem with mice. Customer service was understanding that I was very panicked and got someone out here the next day. The serviceman was on time and friendly. He walked me through what was going on and also pointed out a couple areas that I will need to have repaired as well. It's only been a couple days but I'm extremely happy with the results. Thank you B & B

We appreciate your business! Thanks for taking the time to leave a review. Just know we are a quick call or email away should you ever need our assistance again! Best, John
1.0

Received a prompt call for Jay..after explaining issue that unknown animal was scratching & chewing in walls at night only..he said it was a squirrel & they don’t remove wildlife. He gave me ph # for a wildlife company. Didn’t even want to send someone to do inspection. I called another company who came out next day & helped with our mice issue. Would not recommend this company at all

Description of Work
Had animal scratching & chewing in walls/attic

Waltham Pest Control has been providing professional pest extermination and pest control services for over 30 years to home owners and business owners throughout Massachusetts.  …

Frequently Asked Questions & Answers about B & B Pest Control

How is B & B Pest Control overall rated?

What days are B & B Pest Control open?

B & B Pest Control is open:

What payment options does B & B Pest Control provide

Does B & B Pest Control offer free estimates?

Does B & B Pest Control offer eco-friendly accreditations?

Does B & B Pest Control offer a senior discount?

Yes, B & B Pest Control offers a 5% senior discount.

Does B & B Pest Control offer emergency services?

Are warranties offered by B & B Pest Control?

What services does B & B Pest Control offer?