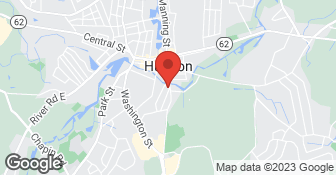 Wish I could give less than one star. I recently had my air conditioner serviced by them. Was told the entire system was checked out and looked to be in good health. All that needed replaced was a fuse, less than 24 hours later and over $250 and the AC isn’t working again. I call and say it might be the outdoor system, they tell me the whole system needs to be replaced because it is “illegal”. Come to find out the system wasn’t illegal AND there are plenty of easily replaceable coolants for my system. Never again will I do business with these lying crooks. Never got that quote for the new system either

Very badly, and the work was cancelled by me, after the second reschedule. Aware this was a small job, so understood I would not be tops in priority from the beginning. Told me they would supply all the parts, but that an electrician would be required to power and wire the electrical bits. Was asks to give me a diagram to explain what was required to MY separate electrician, initially agreed, then told me no diagram, just the part and the sheet coming with the part would explain the circuit. After long gaps, when they were too busy, cancelled my install date twice and then I asked to take me off their list. Good on promises, very poor on delivery.

I cold-called Demelo's when my furnace broke down and my existing service provider was unable to help me. Desperate for help, without heat or hot water, and no service provider, Demelo's helped me. They were professional and kind and highly responsive. I truly appreciate the old-fashioned, customer-first service.

Description of Work
Furnace repair with no service contract

Phenomenal job. Punctual and professional. They even moved the water heater I was having replaced so I would not be without hot water for more than a couple of hours, during the three day job. They went above and beyond after the fact to assist with some issues I was having with my Mass Save loan. Highly recommended!

The work was completed quickly and on-time. I was very disappointed that there was a surcharge distance fee. I live in Hudson and the technician came from Hudson, why was I charged $40 to come onsite? that seems outrageous and unnecessary.

Description of Work
A new line needed to be run from the thermostat to the furnace.

Fantastic! The were professional and very helpful, both the office and installers.

They did come promptly and they did replace the heater but we were surprised that, despite the warranty, they charged us $940.00. We were billed for 10 man-hours - much more than the 3 or so hours we were led to expect. Even the work was problematic: a few days after the installation, two of the connections they fitted were leaking slightly (see below). But what particularly bothered us was Rich Demelo's attitude. After they initially installed the water heater, the room containing tended to get extremely hot. They came out, measured the water temperature at 2 sinks, and wrapped rubber insulation on a couple of exposed hot water pipes - and, although we pointed out that this should have been done to begin with, they charged us $225.00. We had vowed never to use him again because of his intimidating rudeness on the previous occasion, and only reluctantly returned to him because of the warranty. When we questioned the high price of the warranty replacement and suggested some kind of compromise and negotiation, the men doing the work called Demelo, who told them to simply remove the heater if we didn't pay at once. We will definitely never use this company again, despite still having a warranty. When we called a much better company to repair the new leaks, they said we should have recourse with the people who installed it - but we explained that, based on our previous experiences, we could probably expect Demelo to again charge us unreasonably to fix his own work. To be fair, Demelo will do exactly what he agrees to do, but, if any problems arise as a result of his work, be prepared to pay exorbitantly to correct them.

Description of Work
Our indirectly heated hot water tank developed a serious leak. It was recommended and installed by Demelo 7 years ago - with a life time warranty.

Highly recommend Demelo. We priced out several local contractors and Demelo was clearly the one who best understood how to provide a quality cost effective solution for updgrading / converting our existing oil baseboard heating system. They delivered 100% in every aspect of the job from pricing through completion.

Excellent service! Rich DeMelo and Tanya in the office are both great. Very quick to respond. Reasonably priced. Quality workmanship.

This is the second time we use Rich and the Demelo team for MAJOR rip and replace work on a new property. The team is friendly, capable, and does great work. David even signs his name on each furnace on each furnace he installs. Soup to nuts, permit to inspection they do it all professionally. Demelo has been good with responsiveness in general since they are quite a few miles away from our house. They are however very busy and you just need to stay on top of them. We would definitely use them again.

Description of Work
Replaced aging single Hot Air Furnace and Water Heater with 2 new Bryant Furnaces (one in attic and one in basement) and On-Demand Rynai hot water system. Also installed new Range, Dishwasher and Fridge for us. Various other work.

Family owned and operated since 1987, Wilson Brothers HVAC, Inc. has been a leader in the installation and repair of complete, custom-designed, heating and cooling systems for homeowners in Massachusetts and New Hampshire. Hot air, radiant, and hydro-air heating systems fired by either gas or oil, along with complete central air or ductless cooling systems. Trust your home comfort to Wilson Brothers, Your All-Season Comfort Specialists. We also service additional areas through our sister companies, Accurate Baker Elman and Murphy's.  …

For emergency services, please call 781-933-6387. N.E.T.R., Inc. is here to help homeowners install the best heating and cooling systems that fits their needs. Since 1989, we’ve installed heating and cooling systems in Boston and its surrounding areas, tackling tough problems that our clients face. Our goal is to ensure our clients have energy efficient, quiet, reliable systems so they can live their lives to the fullest both at home and at work. Our dedication to our customers’ needs is what drives us each and every day. Our approach to temperature control and comfort has helped us become one of the most respected names in heating, cooling, and refrigeration in New England  …

Papalia Home Services is a company focused on customer satisfaction. Your feedback is important, please let us know what we have done well and where we can improve. Customer service, training, and follow through are where we excel. We have received numerous awards acknowledging our excellent customer service and care for our customer's most valued possession, their home. We are a Trane Comfort Specialist, Mitsubishi Diamond Elite Dealer and Navien Service Specialist which requires us to maintain high standards for the customer's experience. Papalia's employees are dedicated to greatness. Thank you for your interest!  …

No, DEMELO HEATING & AIR CONDITIONING INC does not offer a senior discount.

No, DEMELO HEATING & AIR CONDITIONING INC does not offer warranties.