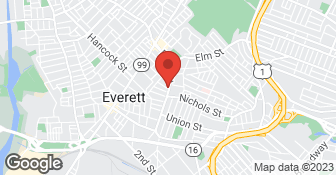 Very well, no issues at all

Description of Work
I had ceiling damage from an overflowed central air conditioner above the room. I prepped the ceiling by scraping off all the loose skimcoat down to the scratch coat - 1930 house. It was in good shape to skim coating was pretty straight forward.

Robson is very skilled at plastering! This is the third time I've used he and his crew. I've also recommended him to a friend and he was very satisfied in Robson's work. In all three times over the past couple of years I would have Robson look at the job and price it. He would also give suggestions on what would work best, but listen carfully to all of my requirements and remember them. At that point he would figure how long the job would take and we would agree on a date. Usually it would be the within the next week or whenever I was ready. He was very careful to lay dropcloths leading to the work area as well as completely clean up afterwards. He also was careful to clean out all electrical boxes of plaser which is a big plus. In the three times I've used him I've been completely satisfied. I'll be sure and use him in the future. One thing to remember is that there is some waste that's generated. This consists of scrap blueboard as well as all the tar paper that he lays down when plastering. He's careful to bag all this up in contractor bags, but it's my responsibility to get rid of it. Since it's usually a remodel that's going on it's no problem as it goes in with all the other debris generated.

Description of Work
They did blue board and plastering for us.

We are an owner-operated business with 10 years of painting experience. We service the greater Boston area. We do exterior painting, power washing, carpentry repair, decks. We also do interior painting including cabinet painting.  …

We are providers of painting services in the area. Our mission is to maintain the highest quality and professionalism from start to finish. We are confident in our results because all our jobs are custom for the needs of each home. We strive for the highest degree of quality products and workmanship. During the years in business, has satisfied many customers. It is our reputation of quality work, professionalism, and customer service our customers continue to rely on us for their needs. To understand the expectations of our customers, we take great care to work and communicate with every customer professionally. We base our reputation on service, safety, and quality. Call us today and find out how we can meet all your needs!  …

We have been doing contracting work for over 20 years and in business since 2000 specializing in carpentry, painting, and remodeling jobs. We can handle any project big or small and pride ourselves on quality service. Please contact us today for your next project!  …

Bonded
Insured
All statements concerning insurance, licenses, and bonds are informational only, and are self-reported. Since insurance, licenses and bonds can expire and can be cancelled, homeowners should always check such information for themselves.To find more licensing information for your state, visit our Find Licensing Requirements page.
General Information
Free Estimates
Yes
Eco-Friendly Accreditations
No
Payment Options
Check
Senior Discount
10%
Warranties
Ask for details

How is All Ways Plastering overall rated?

All Ways Plastering is currently rated 5 overall out of 5.

What payment options does All Ways Plastering provide

All Ways Plastering accepts the following forms of payment: Check

No, All Ways Plastering does not offer eco-friendly accreditations.

Does All Ways Plastering offer a senior discount?

Are warranties offered by All Ways Plastering?

No, All Ways Plastering does not offer warranties.

What services does All Ways Plastering offer?