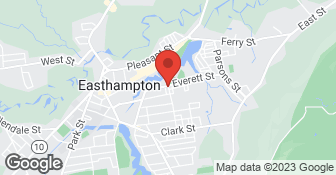 Description of Work
We agreed to have them install gutters. Owner impressed my husband in initial visit by his knowledge and explained how they would use a drip edge extender on the flat roof overhang part of the project. His son who was the person who actually did the work seemed far more clueless, did not give professional advice as to where best to situate downspouts and route water flow, and completely misunderstood the routing of gutters and spouts so they did not ruin the facade of house out front. Good thing we were here to explain. Job ran over budget, they did not use drip edge extender, as a result we had water pouring over windows and flooding parts of basement. Called them back twice to fix. They showed up with no notice, began taking things apart and when asked for a quote, gave an inflated figure of an additional 350 dollars with high pressure sales tactics to agree to it and sign right there and have work done right then...or they offered for us to pay under the table much cheaper. When I questioned the price, and wanted to call the office directly myself to negotiate, more high pressure. The son explained that even he though it was too high and according to his calculations, it should have been 190 dollars, but that he had been told that we had complained by phone about shoddy work (we never said that, but we sure will now). Overall, it WAS bad work, bad service horribly unprofessional, and now I am hiring someone else to finish the job right. Do not use these gangsters. I joined Angie's list again just so I could warn people. Life is too short to be messed around like this.

I was not very pleased with them. They did the job right. They didn't use all the parts so there should have been some money back. It took them a couple of tries to get the contract correct. In the end, they cleaned up and moved stuff.

Thank You for your respond.
4.0

Description of Work
I got a quote from All Star Insulation & Siding for some siding repair.

Thank you for your response.
5.0

After meeting with the owner for the initial consultation, I was impressed with his professionalism. I received an estimate (which was right on par with another company's) and a very detailed list of the work to be done, which I appreciated. The work began a little later than I had originally been told, but once the crew started the job was done more quickly than expected. The crew worked hard, and the house looks great. They also did a good job cleaning up the yard when finished. I couldn't be happier with the results.

Thank You for your response. We were happy to work with you.
5.0

Ed discovered our old sliding door wasn't installed up to code and insisted on installing the new one correctly (at his cost since he didn't notice it when he did the estimate). They came on time, were very courteous and Ed (the owner) checked on their work and with us. When doing the porch the workers noticed our roof was sagging and Ed came down with a post and had them install it (again at no extra cost). We were very pleased with their work and clean up. When one of the windows broke they were very helpful with who to call and getting it replaced. The sliding door had a small defect that bothered me and it was replaced with no questions asked by two very nice men from the manufacturer. We plan to have All Star replace our roof when the time comes.

Description of Work
I know this review is for 10 year old work but we were so pleased and had a lot done by Ed (the owner) and All Star. We had them replace our gutters two years before and called them back for the siding, replacement windows, sliding door, storm doors and replacing the floor of our porch.

Thank You for your response. It was a pleasure to work with you.
5.0

They came they did the work, they were very effecient and did a great job cleaning up as then went. They were very attentive and helpful, anything I wanted fixed or changed they did.

Description of Work
They took off our old siding installed all new siding on our home.

Thank you for your response. It was a pleasure working with you.
1.0

I canceled the job!

Description of Work
All star sent us a quote that was for 40 ft of gutters on our house. The area that we had requested the quote for was only 20 ft. When I called to discuss the misunderstanding with Ed Losacano, the owner, he was patronizing and hostile. Instead of suggesting that we meet at the house to clarify the job, he said that I didn't understand the job. I was shocked at his tone: aggressive and condescending! Wow! The opposite of customer service!! Needless to say, I told him I'd find someone else to do the work!

They have great work and great quality. When they left, they didn't leave any dust or trash. It looked amazing. Their prices are reasonable and their workmanship is incredible!

Description of Work
They replaced all the windows in our house 4 years ago. Most recently, they installed vinyl siding and deck repair.

Thank you for your response. It was a pleasure working with you.

With over 70 years of experience in home improvement, Long Home Products is the industry-leading company you can trust to give you peace of mind. We are a locally owned and operated company that values honesty and integrity and treats your home as if it were our own. We are experts in all aspects of roofing, bathroom, window and door projects. We pride ourselves on the quality of our work as well as our commitment to outstanding results. We look forward to building lasting relationships and guarantee your satisfaction!  …

Adam Quenneville Roofing & Siding is a 3rd generation owned and operated family business. They are proud to have won the 2010 BBB Torch Award out of 1700 companies, which recognizes trust, performance and integrity. As a company, they are dedicated to providing the best possible quality, superior customer service, and workmanship you can trust. Their commitment to excellence has made Adam Quenneville Roofing & Siding the most trusted name in Western Massachusetts and Northern CT for roofing, siding & more.  …

EXPERIENCED. ON TIME. PROFESSIONAL. Our home improvement experts will make sure every aspect of your project turns out the way you want it. Customer service is a cornerstone of our business, and we pride ourselves on creating lasting relationships with our clients. Give us a call or send a message today. We would love to earn your business! ASK US ABOUT OUR SENIOR AND VETERAN DISCOUNTS.  …

Commercial gutters and downspouts not offered at this time.

How is All Star Seamless Gutters Inc overall rated?

All Star Seamless Gutters Inc is currently rated 4.2 overall out of 5.

What days are All Star Seamless Gutters Inc open?

What payment options does All Star Seamless Gutters Inc provide

Does All Star Seamless Gutters Inc offer a senior discount?

No, All Star Seamless Gutters Inc does not offer a senior discount.

Are warranties offered by All Star Seamless Gutters Inc?

What services does All Star Seamless Gutters Inc offer?

Are there any services All Star Seamless Gutters Inc does not offer?

Commercial gutters and downspouts not offered at this time.