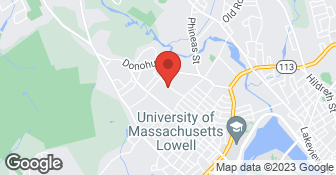 Tom was excellent. At the time he came to do the work, my twins were not walking yet, but I decided to wait to write this review until they'd learned to climb and run around so that I could really see the childproofing in action. Because I have twins, childproofing was an absolute necessity, since much of the time, the kids are going in opposite directions, so knowing potentially dangerous areas of the house were taken care of in case my back was turned was imperative. Tom made the appointment with me quickly and was really helpful in, basically, giving me a tour of my own house from a toddler's perspective, suggesting ways to childproof as he did so (including mentioning things like moving climbable furniture away from windows, etc). When he was done showing me around and discussing different options for problem areas (like how to put a baby gate in the hall near my cellar door instead of in the cellar doorway, which would make my bringing laundry up and down the stairs easier and less dangerous if the kids were running around in the room next to the cellar door) he then had me choose what I wanted him to do--no pressure at all to do anything I didn't want to do. He then installed baby gates for my attic stairs, near my cellar, in my living room at on my staircase, locks for kitchen cabinets, window guards, toilet guards, and harnessing furniture to walls, as well as putting slide outlet covers on outlets in the kids' room, and power strip covers. After that, he gave me a list of other products I might find helpful as well as reviewing ideas for areas in the house where I wasn't yet sure what I wanted. His work was neat and tidy, the baby gates are fantastic quality, there was no mess at all when he left, all of the furniture that's either now bolted to the wall or strapped to it was done neatly, with him showing me how to undo the straps if I needed to. He was super nice and informative and was cheerful with my many questions about potential hazards in the house. Flash forward a year and a half, my twins are now a little older than two, climbing stairs and furniture, sticking their fingers on outlet covers, trying to open every drawer and cabinet they can reach, poking at outlet strip covers, and racing down the hall toward baby gates while the other twin is running into the bathroom trying to lift the lid of the toilet. Now I can absolutely say, thank god for Tom's childproofing! The headache he saved me from doing it myself was invaluable and the potential accidents and mishaps that have been averted because of the childproofing he installed is huge, and the advice he gave me was so helpful. Many parents say, "Oh, I never got around to childproofing" and with one generally well behaved toddler and a lot of supervision, it's totally possible to not do it and have your kid be fine. However, with twins, that kind of supervision just isn't possible because there will always be times when the kids are in two different places--one trying to pull open a kitchen drawer while the other one is trying to climb up the bookshelf (yes, one of my twins did try to do this and I can't tell you what a relief it was to know it was bolted to the wall). So, for me, getting the house childproofed had made my supervising my twins easier (by giving me at least a few more seconds when one runs down a hall they shouldn't and the other is running the other way). And having him do the work for me, in less than a day, saved me so much time and energy, which are two things parents of multiples really don't have to spare. If you're on the fence about hiring a childproofer, you'll probably spend more time hemming and hawing about whether it's worth it, than the time it would take Tom to come into your house and finish the job. There is nothing like the relief of knowing, on the day when your child decides to try to climb up a bookshelf, that you already have it covered, and when your kids start to climb stairs before you're ready for them to, to know that the baby gate is not only up and installed, but is really secure. I can't recommend his services enough, and he was so helpful in ways I appreciated when my kids were no walking yet (when he installed everything) and in ways I appreciate now that they are testing every bit of childproofing he installed. Very happy with the work!

Description of Work
Childproofing my house for twins (installing four baby gates, window gates, attaching bookshelves and other heavy furniture to the walls, covering outlets and generally getting advice on how to childproof different areas of my house).

I made an appointment within four days and it took them four hours to do. It was family that came out. It was the owner and his daughter, they made quick work of it and they know what they are doing. They were early.

I called up the provider as I have a kid coming in under a month to babyproofing the house. He mentioned that now isn't the time to spend money on baby proofing as our kid won't be mobile for a little while. I appreciate his honesty and not trying to come out and sell me everything under the sun.

Overall, I was very impressed by the service provided. Susan and Jeff were kind enough to find a way to squeeze me onto their schedule in a pinch, which I know wasn't easy. Jeff came very promptly, calling ahead to make sure that the timing was still good, and quickly and professionally installed 2 baby gates on the stairs, mounted numerous bookshelves, a play kitchen, and 2 dressers to the walls, and removed a swinging door. He was nice enough to move the door to the basement (not an easy task, as it was quite heavy). I was particularly impressed with the job he did on the baby gates -- our stairwell is a weird width, and he very quickly designed an appropriate contraption so that the gates could be mounted safely. The only thing I wish he had done differently was to vacuum behind the bookshelves/dressers before tightening the mounting straps so that the sawdust from the drilling was cleaned up, but overall, he did a fabulous job and I wouldn't hesitate to recommend him and use him again.

This is a great service that makes the process of baby proofing a painless and compact experience. Setting an appointment was easy and the vendor showed up promptly to walk through the house with my wife, make suggestions, and then agree on what was to be done. From there he goes about installing your choices and completing the work in one day. This service is a bit of a luxury but if you have the means it is incredibly efficient and the best possible way to ensure yourself of a safer baby environment. The folks we dealt with were all professional and friendly. Highly recommended.

They are wonderful and incredibly responsive. They anticipated what I would need when I did not know myself. I have two very young children and I have not had to worry about them doing anything dangerous. I did not do too much shopping around, but I think their service is worth it. I have recommended them.

The provider was very knowledgable, has been doing this for a long time, so he knew what would fit, which gate would be best and installation was very fast. He was great at what he did- it is definitely a bit expensive, but you cant put a price on safety, and so it was an important job for us to get done in our new house. It really lets us enjoy the house more, knowing that potential sources of injury have been eliminated from the space.

Description of Work
Safe Beginnings came in and installed gates for the top of two staircases in our home.

Safe beginnings was a great company to work with. They were very informative and easy to work with. The informational brochure was great and gave all of the pricing. They were professional and curteous. Instillation was quick and only took a few hours. They were also very helpful when installing the pool fence in giving us ideas and things to keep in mind when it came to fence placement and where to have the gate opening. The price is a little steep, but there aren't many pool fence companies in the area that install this type of fence and most were comparable in price.

Description of Work
On 4-28-11 we had Safe Beginnings install a pool fence around our in-ground pool.

Overall, I was extremely happy. The person who did the installation obviously had a great deal of experience (and educated me on common sources of injury I would never have suspected). He worked efficiently, yet spent extra time where it was needed (e.g. multiple reconfigurations to get the baby gates up and ensure we were happy with how they opened, and the footprint they took up). The only downside of the experience was that he left sawdust outside and within the kitchen cabinets as he was installing locks on each.

Description of Work
They installed baby gates to block off our staircase (non-standard, difficult spaces at both the top and bottom), and did other general babyproofing - attaching bookcases to walls, installing outlet covers, stove protector, etc.)

The overall experience was great. I called them on a Thursday and they had availability immediately. Jeff was extremely professional and friendly. He arrived promptly, walked me through the process, answered any questions I had. He then quickly and effortley installed all the childproofing components including cabinet locks, door locks, gates, and outlet covers. Overall the pricing was a little higher then the parts you would find on Amazon but were higher quality. I would highly recommend Safe Beginnings.

Description of Work
Jeff came by and made recommendation for childproofing my home. He did not oversell and even made cost cutting recommendations.

Insured
All statements concerning insurance, licenses, and bonds are informational only, and are self-reported. Since insurance, licenses and bonds can expire and can be cancelled, homeowners should always check such information for themselves.To find more licensing information for your state, visit our Find Licensing Requirements page.
General Information
Free Estimates
No
Eco-Friendly Accreditations
No
Payment Options
Check
Senior Discount
NO
Warranties
Ask for details

Safe Beginnings Childproofing is currently rated 5 overall out of 5.

No, Safe Beginnings Childproofing does not offer free project estimates.

No, Safe Beginnings Childproofing does not offer eco-friendly accreditations.

No, Safe Beginnings Childproofing does not offer a senior discount.

No, Safe Beginnings Childproofing does not offer warranties.