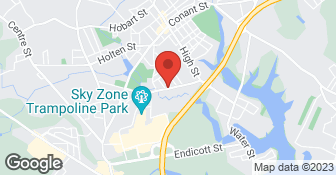 Locally owned business with over 12 years of experience. Passionate about serving our local community and continuing to deliver great customer service. Feel free to call or text with questions regarding your projects. Look forward to working with you on all your home endeavors.  …

David studied the site over 3 different visits before making his proposal - there were some drainage problems related to the City's repaving of the street several years ago. He coached me on questions to ask the DPW to confirm what they would allow. Once I had their answers, he returned and ran a hose over the existing driveway to assess the regarding needs further. He also came back during a heavy rainstorm to personally observe the drainage problems I had described. His proposal was more costly than my other estimates but after listening to the detail of each proposal, I felt his solution did more to correct the issues we have and prevent them from returning - stronger foundation, more material, etc. He was willing to work to reduce price a bit as well. In the two weeks since he completed his work, we have had two "gullywasher" rainstorms. Previously, these storms would have flooded my driveway with overflow from the street that would have drained into my yard, creating a pond beneath my shed. With the regarding, I was able to see that all the street drainage now remains in the street and drains into the city storm drain. Mission accomplished.