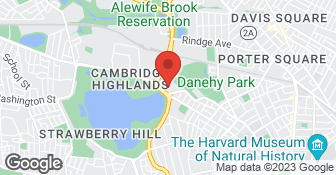 Black Magic Chimney & Fireplace was established in 1978 as a full service chimney business. Black Magic is celebrating its 22nd year of selling a fine selection of fireplaces and stoves for the Metropolitan Boston area. We pride ourselves in providing quality chimney and installation service for the homeowner. Whether you need a chimney lining, cleaning or a pellet stove; our philosophy is not to oversell, but rather to provide an appropriate solution to your needs. We have more than 115 gas, pellet, electric fireplaces, stoves and inserts on display in our SHOW ROOM in Cambridge. Many are live burning. Whether your taste is Traditional, Victorian or Contemporary we invite you to come in and see for your self our units from only major and established manufacturers. We install and service what we sell. Call or come see us today!...

They were exceedingly rude and complained that I didn't have the manuals so they couldn't do the work. I suggested they go online the way most repair people access manuals these days and they said they couldn't figure out the make or model so they were incompetent as well as rude. I would never recommend them to anyone!

It went great. This is a very professional and responsive team. I called about 6 different places and Black Magic gave me the most prompt reply and best rate

Technician inspected chimney and discovered it was clean, no work was needed. Verified duct work going to chimney was in good shape, made a few other suggestions. Charged me a nominal fee for the inspection, much less than the amount I had agreed to pay for the work. Would definitely call this firm again for similar type work.

Description of Work
Hired firm to clean out chimney.

Great service. Answered all of my questions and didn't try to take advantage of my lack of knowledge with chimneys. Chimney looks good and didn't need a sweep or any work. Chimney cap was put on and I didn't need to be home. Came home from work and the cap was on. Highly recommend them.

Black Magic only came out to give an estimate. Perry missed first scheduled appointment due to illness, rescheduled for a week later and then missed the second appointment because he "forgot". This wasted hours of my time. Weeks later, I contacted the second owner and scheduled another appointment, as this is one of the few vendors who carries the fireplace I would like to install. The second owner also rescheduled once due to a calendar conflict but showed up on time for the appointment. However, upon arrival, he stated that he was "pressed for time", spent 2 minutes looking up into my fireplace and promptly left, saying that I needed to hire a mason to go any further with the project. I will seek another company who values its customers instead of treating them like a nuisance.

great. good people. good work. honest appraisal of what was needed. didn't try to upsell me.

Work was done professionally and on time.

Description of Work
Upon inspection of furnace, air flow was a little lower than ideal, so hired Black Magic for chimney sweeping.

We used BLACK MAGIC CHIMNEY SWEEPS just recently and they did a good job. They did a fine job. They showed up on time, cleaned everything up, it was good. I looked on Angie's list first 'cause there's a lot of possible chimney sweeps. In fact, these days, we've been getting a lot of phone calls from companies offering chimney sweeps services. We had to get somebody that had good reviews. They were able to come really quickly after I called them. I really have no idea, it's been so long since we had our chimney swept, you know, I don't know, I guess the price seems reasonable. I think it seemed reasonable compared to prices that were quoted in other older reviews. They were great, really fast, I got the appointment, I think, within just a few days or a week from the time that I called. And they showed up on time when they said they would.

Description of Work
We had the chimney swept by BLACK MAGIC CHIMNEY SWEEPS.

I'm really not sure how this company stays in business. Each of the guys I spoke with was perfectly nice, and I really liked the idea of shopping locally, but it took two home visits and several phone calls just to get them to send me a price quote and take my money. That raised some red flags, but I was getting equally bad service from another stove shop in the area, and Black Magic was closer. We finally ended up getting the order placed and a date was set for delivery. Two technicians showed up as promised, but it was clear that they had never installed this particular model before. We soon realized that the flames were entirely blue, which signaled an installation problem, according to the manual. We also discovered that they had left two sizable gouges in our 1910 wood floor, which was very disappointing. After several calls, we got someone to come out to adjust the flame (they applied oil to the gouges to make them less visible, but they're still there). However, after making the adjustment, the technician didn't reassemble the unit properly, so it flared out at the sides and wobbled on top. Today, two different technicians came out, not knowing the other one was assigned to the job, but they did manage to properly reassemble the unit. We hope this will be our last interaction with Black Magic for some time. I'm genuinely sorry to give such a bad review, but this was such an absurd experience that I do feel that others should be warned.

Description of Work
We purchased a standing Quadra gas stove, had it installed, and had two subsequent service calls to deal with installation problems.

We have the know-how to tackle everything from the smallest of repairs to large-scale projects. No matter the size of the job. We always work hard to ensure our clients are completely satisfied with our work.  …

Boston’s Best Chimney is your one stop chimney service company specializing in every aspect of chimney maintenance and repair. We feature chimney sweeping, chimney relining, chimney repairs, chimney rebuilding and chimney restorations at competitive rates. BBC has provided top quality service to homeowners and businesses in and around the Boston area since 1989. We have received numerous accolades for our old world craftsmanship and new world technology. Boston's Best Chimney has over 35,000 satisfied clients and is well respected in the local market both among homeowners and realtors. In addition to our residential homes serviced we have extensive experience with commercial venting. Award winning.  …

Bonded
Insured
All statements concerning insurance, licenses, and bonds are informational only, and are self-reported. Since insurance, licenses and bonds can expire and can be cancelled, homeowners should always check such information for themselves.To find more licensing information for your state, visit our Find Licensing Requirements page.
General Information
Free Estimates
Yes
Eco-Friendly Accreditations
No
Payment Options
Check, Visa, MasterCard, American Express, Discover
Senior Discount
NO
Warranties
Call for details

BLACK MAGIC CHIMNEY SWEEPS is currently rated 4 overall out of 5.

No, BLACK MAGIC CHIMNEY SWEEPS does not offer eco-friendly accreditations.

No, BLACK MAGIC CHIMNEY SWEEPS does not offer a senior discount.

No, BLACK MAGIC CHIMNEY SWEEPS does not offer warranties.