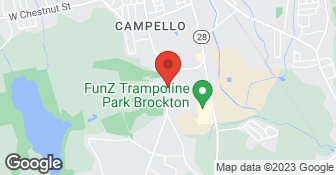 Everything was good. He did what he said. The price was good, they were on time and I was pretty happy.

Description of Work
I used J. A. Cooper to put in a new driveway.

Description of Work
did a great job, great people to work with

Gave me an estimate last November 2012. I called in June 2013 and they honored the price. The owner came down and walked the areas that were to be removed and repaved and explained the entire process.He also explained as to what might be cut back or removed as far as landscaping was concerned . They showed up on time, and worked for 7 hours in 95 degree direct sun. All the workers were professional, polite, and very helpful. My property has an invisible dog fence that had a major portion of it laid out under the driveway and they repaired the electrical wiring that had to be cut to remove the old asphalt and they re-installed it prior to the installation of the new asphalt. It was a very positive experience. There are several other asphalt companies under the Cooper name. DO NOT CONFUSE him with the others. He uses J.A. Cooper and is not connected to any other company with the same name.

Description of Work
Ripped up old existing driveway and installed new one.

It was a pleasure doing business with you (Member name removed), thank you for the positive feedback!

Welcome to John Cooper Paving & Sealing, Inc. John Cooper Paving & Sealing, Inc. is a paving and seal coating company that has been in business since 1946. Our professional staff provides excellent customer service from the beginning to the end of your project. Whether you are maintaining your existing driveway or building new construction, we can get the job done. Call us today to schedule a consultation.  …

Robert Heap, Sr, started Heap Paving & Sealing in 1960 and his son, Greg Heap, joined the family business in 1988. Since Robert's passing in 2008, Greg has continued running the family business and for over 50 years our company has stood by our original founding principles of quality, reliability, professionalism and safety. Our pledge has been and will always be 100% customer satisfaction. Our Philosophy: At Heap Paving & Sealing, our mission is to give each job, no matter how large or small, the most careful attention and skilled workmanship. We aim to provide our customers with cost effective solutions to asphalt installation and maintenance. We believe in giving respect where it is due. This is why we give Seniors, Veterans, Firefighters and Police Officers a discount on our services.  …

New Mark Pavement Marking Inc. has earned the the Angie's List Super Service Award 6 years in a row (2013-2018). With this award, we have proven our high quality work and treat every property with the utmost care. We are here to help you protect your investment during harsh winter months while making your property look good during the summer months. Call us today to schedule your appointment - (508) 726-2626  …

How is Asphalt Paving By J.A. Cooper overall rated?

Asphalt Paving By J.A. Cooper is currently rated 5 overall out of 5.

What days are Asphalt Paving By J.A. Cooper open?

What payment options does Asphalt Paving By J.A. Cooper provide

No, Asphalt Paving By J.A. Cooper does not offer eco-friendly accreditations.

Does Asphalt Paving By J.A. Cooper offer a senior discount?

No, Asphalt Paving By J.A. Cooper does not offer a senior discount.

Are warranties offered by Asphalt Paving By J.A. Cooper?

What services does Asphalt Paving By J.A. Cooper offer?