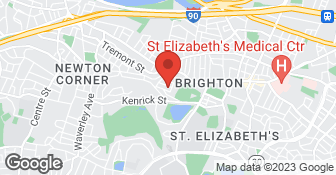 Needed brick repointing work in the basement and the job was well done. He also built a brick patio and the patio was beautifully done. I highly recommend him!!!!

Description of Work
Needed brick repointing work in the basement and a brick patio in my back yard.

They did what was needed. Time will tell if the patches hold up.

Excellent! The previous owner(s) had patched and shored up the wall over many decades and the rebuild was quite a challenge. From start to finish, Eugene was very professional: showing up when he said he would, polite/hardworking and completing the job on time. I am very pleased with the end result. I will be using Eugene again and am happy to recommend him. (I have attached before and after pictures to give a sense of his work).

Description of Work
Demolition and rebuild of an old (and dangerously decrepit !) L-shaped retaining wall.

They we're great-responsive in both the proposal and project phases, professional, prompt. Did a great job! Practical approach to scope, helpful in educating me, efficient and thorough in execution.

They did an excellent job of repairing the garage, including pouring new reinforced concrete in the area above the garage door, patching the ceiling, and replacing some old style concrete blocks with others that closely matched the originals. They started the job when they said and finished when they said.

Description of Work
We had a 100 or so year old concrete block and masonry garage that was in need of considerable repair due to an old roof leak.

Eugene was very responsive via phone and texts, and quick to give us an estimate after he had seen the work needed. He was able to come earlier than anticipated (which we very much appreciated). Our garage now looks MUCH better, as do the front steps. He left the place clean of debris. We would highly recommend on the basis of his responsiveness, excellent work and reasonable pricing.

Eugene and Raphael were great taking out the chimney in just a day and a half with pretty much no peripheral damage except what couldn't realistically be avoided. Eugene even put down some new concrete at the base of the chimney since the bricks went below the basement floor. Definitely would hire again for any masonry needs.

Description of Work
Removal of a chimney from center of home

Eugene is an artisan. He is extremely talented and thorough and did the pointing job in very good time. The work he did for us is outstanding and we will be using him again. We've had several people in our midtown Cambridge neighborhood stop by and comment on the amazing job he did - cutting deeper into the grout and filling it with the perfect color. It's a work of art! His pricing is good - and because he knows his stuff and is honest he didn't try to oversell us and expect us to do the whole building at once. The areas he suggested we concentrate on were the areas we had started having leaking. Other masons were pushing us to do more and not listening to our concerns. We are a smaller condo complex and don't have a huge budget to spend and appreciated Eugene working to keep costs reasonable. We will be doing more with Eugene in the future! He exceeded expectations!

Spoke with Eugene in late Fall and, after due diligence to reveal pricing that is right in line with what it should be, we set up that ours would be his first project of the year after return from holiday travels in Ireland. Received a call first week of January letting us know he'd be there that Friday to start. One week later, the job was complete and, most amazing to me, the basement was cleaner after he was finished than it was when he began. He took care to tarp off all exposed areas before starting, and went above and beyond to take care of a couple extra concrete fills that we're in the initial spec. Eugene approaches his work as an artisan and professional. His team arrived like clockwork early every day to get the job done with timeliness and quality. We are very pleased with the result and plan to bring him back in Spring for some exterior masonry that needs to be addressed.

Description of Work
Eugene and his team re-pointed the interior brick foundation in the basement of our 1880-built house and took care of some concrete flooring issues in the basement.

Very responsive. Eugene let me know his schedule and the work was done as promised. Good people to work with and they care to get it right, as when a day's work was ripped out because the color wasn't right