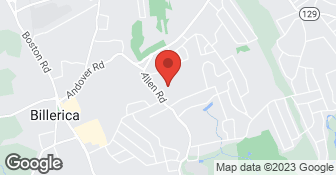 Excellent excellent job paid when if was done recommend

Salemi Exteriors did a wonderful job. The roof looks fantastic. Their work was extremely clean as well; in fact they left the yard cleaner than when they arrived!

Description of Work
We needed a new roof on our home.

Steve is an Allstar in the siding/roofing business. He is professional, fair, and experienced. Not only was the work done faster then promised but the production of his work speaks for itself. We were extremely happy to have worked with Steve and not only will I high recommend him but I shall contact him for any further needs! -Home owners, Billerica Ma

From the day I contacted Steve, the owner, I was impressed. I called him on a Friday and he came out the following day to meet with me to discuss options and show me product samples. I had previously gotten 5 other estimates. Steve's quote wasn't the lowest, nor would I go with the lowest, you get what you pay for. Upon signing the contract, I was given an approximate start date and given several updates prior to the project starting. Steve and his crew were very respectful, neat and polite. They are a hard working crew, we had the work done in August when the temperature was in the mid 90's and quite humid. They put in long days, didn't call it quits at 3:30 like most contractors. We had some rotting sheathing that they took care of, there was an additional fee which I expected as it was spelled out as such in the contract. It has been 3 months since we have had the work done and we have zero complaints or issues. I haven't even found a single nail in my yard, they really do a good clean up. Several neighbors complimented me on the roof and I passed along Steve's info with a glowing recommendation. Call Steve if you need a roof, you will be glad you did. Mike M. Danvers, Ma.

Description of Work
Roofing replaced on my house

Steve and crew did a great job! They were professional and got the job done quickly. I would highly recommend to others.

Steve and his team did an excellent job. He was prompt and responsive. The job was done at a fair price. The site was kept clean and tidy. Everyone working there was very polite and willing to answer any question. I couldn't have asked for more and would certainly use him again.

I hired Salemi Exteriors to roof my house. Both Steve and his staff expressed professionalism from start to finish. Steve showed up on time for the estimate and job. His pricing was inline with all of my other quotes received. My roof was stripped, shingled, and my yard was cleaned spotless. Also, the dumpster for the roof was dropped the morning of and picked up the next day! I will and have recommended Salemi Exteriors to friends and family.

Description of Work
New Roof for my house

Steve was very prompt professional and delivered on his promise for a June Deadline. He truly cared for our needs and wants and was able to delivery good product while providing great service. I highly recommend Steve and his experienced crew

IT IS THE BEST ROOF REPAIR/REPLACEMENT

They are awesome! They did a great job.

Description of Work
This job was a total roof replacement,

It went awesome - despite the noise I worked from home and walked around the property every hour. WOW Salemi replaced 12 sheets of plywood, sealed everything, repaired all the bad and even slightly bad roof, then wrapped the roof in ice-shields, black stuff, and drip edging, and new shingles. Of course its basically now a brand new roof, looks amazing! Based on the team and their roofing expertise I definitely think this will last 20+ years. Thanks you for repairing all that rotted awful mess.

Description of Work
I had 6 pages of issues on the inspection report when I bought my new house. Rotting roof, bad seals, nails popping (previous owner installed the roof on his own)... This all had to be stripped, fixed, and re-roofed.

Getting an estimate and getting on Steve's schedule were very hard as he is extremely busy. Steve did confirm coming in on a Saturday with his crew to accommodate our schedule, showed up on time, got the job done well. Chimney knocked down, debris removed, no damage to roof solar panels, roof truss reinforced and new shingles placed on roof. All in half a day. Steve was a good value. If we had one issue, it is with communications - we had to be very persistent in chasing down Steve. That just made us feel like he was not as professional as he was once on site. We would use Steve's services again in the future.

Description of Work
Remove Chimney down to roof line, patch up roof with new shingles

We're a locally owned and operated company that values honesty and integrity and treats your home or business as if it were our own. We are experts in all aspects of roofing projects and our services are customizable to each individual project. We specialize in both installations and replacements. We pride ourselves on the quality of our work as well as our commitment to outstanding results. We look forward to building lasting relationships and guarantee your satisfaction!  …

At Alo Seamless Gutters we pride ourselves in providing the highest quality installation techniques developed over many years of continuous service. Customer service is crucial; from the initial estimate/consultation to the actual installation we provide the finest workmanship with superb customer service. In the winter, we also remove snow and de-ice your roof and prevent ice dams in your gutters! Additional email - robert@alogutters.com.  …

***Due to high demand of our gutter guards we do not offer gutter repairs at this time*** If you've got gutters, there's a good chance you've got problems. The good news is you don’t need to repair them, just protect them! That's where we come in! Guttershell of New England installs the unique and revolutionary Guttershell, the industry's only "double-drop" aluminum gutter protection system. It works flawlessly to divert rainwater into your gutters and prevent leaves, pine needles, twigs and other debris from clogging gutters and downspouts, saving the gutters already in place and saving you the cost of replacing them! That's why, after more than 20 combined years in the gutter cleaning and protection business, Guttershell is now the only system we install. You can be confident that when Guttershell of New England arrives at your home, we'll deliver more than a quality product: *A gutter specialist will evaluate your home and recommend a variety of solutions to your gutter problems *Before installing Guttershell, our professionals fully clean gutters and downspouts, inspect their condition, and perform "tune up" maintenance if necessary *All our installers are professionally trained to provide a custom fit regardless of your existing gutters or roof-line Please Do Not Use Angie's List Message System. Call Us Or Email Us Directly. If You Must Use It Give Me Your Phone Number In The Message. *We are customer service driven to exceed your expectations *Everyone at Guttershell is dependable, friendly, professional We Do Not Do Gutter Repairs Unless You Are Purchasing Gutter Covers.  …

How is Salemi Exteriors overall rated?

Salemi Exteriors is currently rated 4.8 overall out of 5.

What days are Salemi Exteriors open?

No, Salemi Exteriors does not offer eco-friendly accreditations.

Are warranties offered by Salemi Exteriors?

What services does Salemi Exteriors offer?