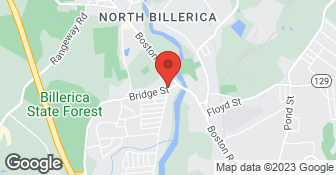 d. a. kinsella company was created to make great design accessible to everyone. Our philosophy has always been that strong communication and attention to budget allow us to achieve unique design and planning solutions for every project. DBA- d. a. kinsella company, tbc, Architects, LLC tbc, Design-Build, LLC, & tbc, inc....

Color Matters Painting is a fully insured company including painters that have more than 10 years of experience. When you're looking for 'awesome', you can count on us. You are guaranteed professional, reliable, and honest painters. We have one mission- to beautify your home and exceed your expectations!  …

Great, Dave stayed within our budget and our addition looks like it was part of a whole new home construction. We were really impressed with Dave Kinsella's design concepts and the workmanship was high quality even though we were on a tight budget. Dave comes from a big family so he understands money and time constraints plus he wants his projects to look as aesthetically pleasing to his clients a...

Description of Work
Dave was our architect and contractor for a 2nd story addition, foyer, outside siding, windows, front porch.

Don't know how this came to me for review. We have never even been in contact with these folks. Sorry.

Description of Work
Nothing was needed

The experience was good and they are well known in town.

Description of Work
I got a quote from d. a. kinsella.

Our house was a 1955 ranch-style house with 3 bedrooms, one bath, kitchen, and living/dining room that we moved into in 1995. We had been looking to add a second bathroom and had originally worked with an architect from NH to do a modest front and rear bump out to give us more room to fit in a second bathroom. This architect had to withdraw from the job and recommended David Kinsella of TBC. David...

Description of Work
Our house was a 1955 ranch-style house with 3 bedrooms, one bath, kitchen, and living/dining room that we moved into in 1995. We had been looking to add a second bathroom and had originally worked with an architect from NH to do a modest front and rear bump out to give us more room to fit in a second bathroom. This architect had to withdraw from the job and recommended David Kinsella of TBC. David initially made some modest changes to the plan that made sense. After some further discussion, in which my wife and I raised the possibility of a larger scale project to modernize the style of the house, David developed a plan that essentially rebuilt the house except for our previously remodeled kitchen and original foundation. This new plan converted our house into modern design with a more open floor plan, completely new roof line, loft space, re-finished basement (and the second bathroom).

Best client to work with, they allowed us to utilize our training and creativity to the fullest extent. Thank-you it was a pleasure to earn your accolades.
4.0

Contacted them in march, they were quick to get back to me to see the job and make a proposal. I wanted steel rather than the more common laminated wood beam, they were happy to accomodate this. I had to clear all my stuff out of the basement so that they could work, this delayed my acceptance of the contract until I finished . When they began it took about a 2 weeks to complete. They first put up 2 tempoary support walls, removed the basement staircase and put it off to one side, then poured the footings for the post.When the concrete was ready it took 1 day to lift in the beam and put the post under it. A great improvement over what was there when i bought the house. October 2015, I am still pleased with the steel beam.

Description of Work
Removed the main beam that runs the length of my basement. Removed 2 wood post that were set into the dirt. installed a Steel beam and 3 iron lally colums. installed earthquake straps to tie the beam to several of the floor joist

One of the principles came out and he showed up on time. He was very easy to talk to, flexible, and appeared to know what he was talking about. Based on our experience with them so far, we will seriously consider the estimate.

Description of Work
I asked The Backyard Collaborative out for an estimate. We are possibly putting an addition on our house.