Hurricane Shutters
Kitchen and Bath Remodeling
Awnings
Doors
Screen repair
Garage Doors
Licensing
Bonded
Insured
All statements concerning insurance, licenses, and bonds are informational only, and are self-reported. Since insurance, licenses and bonds can expire and can be cancelled, homeowners should always check such information for themselves. To find more licensing information for your state, visit our Find Licensing Requirements page.
Business Details 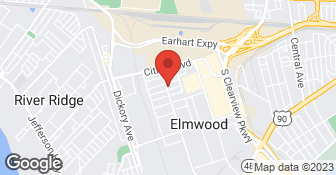 Crescent City Garage Door LLC is a veteran owned business with over 20 years of industry experience providing expert garage door installation and service to the New Orleans Area. We are committed to the highest standards customer satisfaction, craftsmanship, and professionalism. We are courteous, friendly and prompt, and will treat your home with the utmost respect. We specialize in residential and commercial garage door repairs and installation.

Do not use this company. Very poor workmanship and no customer service. I have mildewed windows on the two windows they installed. Had 10 windows installed by another company at the same time with no issues. Capital Improvement agrees they are moldy. They say there is no warranty. Please find a professional company.

DESCRIPTION OF WORK
Closed in two sets of french doors to window openings.

We sincerely wanted to use Capital Improvement for a bathroom renovation.  The initial outreach from two supervisors was exceptional.  Then, one of them left the company and the other was non-responsive.  I reached out a few weeks later to the main line and was told someone would contact me.  When William finally reached out after weeks, he was difficult and unprofessional.  He would was not willi...

DESCRIPTION OF WORK
William at Capital Improvements was not responsive for weeks and when I reached out to get more information, he was rude, unprofessional and difficult to work with in his communication with me and my husband both.

William Hale General Contractor Capital Improvement 504-733-5722 www.capitalimprovement.com [Members Name], I appreciate the opportunity to help you with your project. I was not, and am not in the habit of being rude. You called me on 2 occasions and I returned your call the same day. I offered to meet with you during regular business hours; I spoke to [members name] and offered to help with the p...
3.0

In about August of 2012, whenever it rained, water started leaking at the inside wall of the house along the edge of the ceiling. Since I had a 40 year warranty from Capital Improvement, I called them and spoke to Mr. William Hale, owner of the company. I had to contact Mr Hale several times to finally get him to come and inspect the damage. Mr.Hale did not even want to inspect the roof and was on...

DESCRIPTION OF WORK
This job was done in about February of 2005. It included the installation of a new roof, including removing existing shingles from home and garage and hauling away debris, inspect deck area for damage and allow for 2 sheets plywood if needed. Remove existing gutters and install new gutters. Install 15 lb felt and Elk 40 year (Wedgewood Blue) shingles to home and garage. Other work included was installation of wind turbine, installation of gutters and downspouts, five sets of vinyl shutters. My complaint is focused only on the roof work and materials. The contract states that Capital Improvement agrees to do the work in a workmanlike manner in accordance with standard practices and not to use any factory seconds, or sub-standard materials.

Thank you for giving us to opportunity to help you with this matter. It is important to remember that this project was done in 2005 with incredible results. The warranty on the shingles is from the manufacturer and covers any defects. The craftsmanship we provided on your projects was of high quality and was not the cause of the leak in your wall. As I said, and as you stated, the leak was the res...
3.0

Did not use Capital for any of the work after establishing that the contractor's fee was to go to me not to them was they told me. Had windows installed at a lower cost, had all the repairs completed in a timely fashion by various different contractors. Update: It should be noted that the percentage called "general contractor's fee," is a fee that IS available to the consumer and is not supposed t...

DESCRIPTION OF WORK
We asked for an estimate on replacing windows and completing repair services to damage due to Hurricane Issac, including interior and exterior repairs.  The insurance company repair estimate included a fee that would be reimbursed to us, entitled "contractor's fees. We were told by the insurance company tat that was our reimbursement if we managed to get all of the repairs completed. Capital improvement stated that the fee would be their fee and charged us for it.  Te lesson learned here is to NEVER share your insurance data with a Louisiana contractor. I am glad I asked the insurance company about that fee or would have paid someone else for all of my hard work in finding folks to compete the repairs....which I did on my own and did get my contractor's fee returned to me.