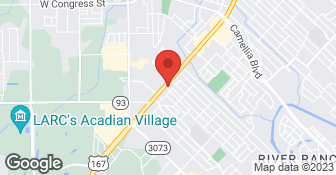 "FROM THE ROOF TO THE ROOTS OF ACADIANA, we've got you covered!" The staff at Lafayette Roofing and General Contractors, LLC. strive to use only the best quality products and skilled workmanship available in our market. As a company, we take pride in completing your job on schedule while upholding all safety standards required by state and federal law. Our mission is to offer competitive pricing throughout the industry and to warrant any work that is completed. We believe in having a professional appearance and providing professional service, all while achieving "total customer satisfaction". A tradition of excellence, and the principles of honesty and integrity are the cornerstones of our business. Our ultimate goal is to earn the trust and confidence of our customers, so they will gladly do business with us again and recommend our company to others!...

My husband and I had our roof replaced in February of 2017. Our roof already had 3 skylights in one room. Our sales rep, Todd Dwyer, gave us a quote to replace them for $1,590, but said that the current skylights were in good shape and we could keep them if we would like. When we asked for his opinion, he recommended we go ahead and keep them to save some money. He failed to mention that the contract we had to sign specifically stated that the company urges everyone to replace skylights because existing skylights would not be covered under the warranty. If he had told us that, we would have replaced them. He also led us to believe that we discussed everything in the contract prior to signing it. We were not given a copy of the contract. 6 months after re-installation, we noticed a bad leak after a heavy rain. The room has a very high, slanted ceiling. The only reason I saw the leak at that time is because the ceiling started to flake off into the room making me look up. I called Mr. Dwyer. He came out and again never mentioned the contract and in fact led me to believe that if their work caused the damage they would cover everything. He said they would have to inspect more closely and that would happen at a later time because it was so rainy and they were busy. He offered to have a tarp put down if the leak worsened. A week later tropical weather was expected so we called for the tarp. A full month later we never heard anything. I called again and was told they inspected it (I do not know when and I work at home) and that the damages are not their responsibility according to the contract. He also said that the leak was caused by a problem with the skylight and not with their work. I was not given photos or any evidence of their inspection. I asked if the skylights could have been damaged when they re-installed them and was told "anything is possible." We asked for an estimate for replacement. The price soared to $2,700 including repair of damages caused by the tarp! No warranty was offered for the new repairs. When we suggested taking our business elsewhere, we were told that any work done by another company would void the 5 year warranty on the rest of the roof. We filed a complaint with the BBB hoping for a compromise. They again took over a month to respond and offered no compromise on the price and still no warranty for any new work.

Description of Work
Our roof needed to be replaces. 3 already existing skylights were taken down and put back into place.

We specialize in windows and glass solutions & more! We guarantee your satisfaction, and we won’t leave until the job is done right. We pride ourselves on the quality work we provide, while delivering great customer service! Check out all the services we offer below and call -- or-- click to schedule a free estimate today!  …

I am a 5th generation carpenter. This is a family trade passed down, and I would like to continue the family trade and pass it on to my son. I have been in this business since I was 10 years old. "I am now 32". An have been running my own company for 7 years now. I am an excellent carpenter and painter with competitive prices, I'm customer friendly, and keep my jobsite clean from debris. I guarantee your satisfaction, and I won’t leave until the job is done right. I pride myself on the quality work I provide, while delivering great customer service! Call -or- click to schedule a free estimate today!  …

The name of my company says it all. Quality is the first priority. I have been painting for 20 years.I do interior/exterior painting as well as Sheetrock work. Patching as well as finishing. Im both the owner and operator of this company. I take pride in my work as well as pleasing the customers. I have references both from customers as well as contractors. My pricing is fair and thoroughly explained upfront.  …

Residential re-roofing is our speciality. All full roof replacements are guaranteed by our 5 Year Labor Warranty.Our skilled carpentry division can repair all the rotten wood areas on or around your home. (Soffit, Fascia, Dormers and Chimneys) *Finally ready to build that addition or outdoor kitchen? Let our design build team coordinate a streamline construction process from start to finish!

How is Lafayette Roofing and General Contractors,LLC overall rated?

Lafayette Roofing and General Contractors,LLC is currently rated 2 overall out of 5.

What days are Lafayette Roofing and General Contractors,LLC open?

What payment options does Lafayette Roofing and General Contractors,LLC provide

No, Lafayette Roofing and General Contractors,LLC does not offer eco-friendly accreditations.

Does Lafayette Roofing and General Contractors,LLC offer a senior discount?

No, Lafayette Roofing and General Contractors,LLC does not offer a senior discount.

Are warranties offered by Lafayette Roofing and General Contractors,LLC?

No, Lafayette Roofing and General Contractors,LLC does not offer warranties.

What services does Lafayette Roofing and General Contractors,LLC offer?

Lafayette Roofing and General Contractors,LLC offers the following services: Residential re-roofing is our speciality. All full roof replacements are guaranteed by our 5 Year Labor Warranty.Our skilled carpentry division can repair all the rotten wood areas on or around your home. (Soffit, Fascia, Dormers and Chimneys) *Finally ready to build that addition or outdoor kitchen? Let our design build team coordinate a streamline construction process from start to finish!