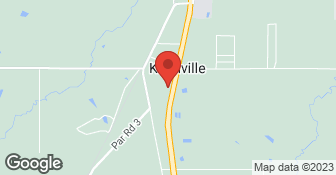 They acted as if unimportant to them; they made 3 dfferent appts and didn't show up for them. I wasted my time waiting for them and lost 3 days of time. I would never use this company,

Description of Work
was replaced with another vendor by my Home Protection Service....Choice Home Warranty

The repairman came out and and began inspecting the refrigerator, looking for the source of the problem. During his examination, he commented that he hated the door alarm. I replied that I liked it, because one time the corner of a dish towel was closed in the upper fridge door and the alarm alerted me. He asked how long it took and I told him just a few seconds. I also told him that I no longer hung the towel on the door handle, since with the french doors, this was more likely to happen. He was unable to find the source of the problem, but told me that the problem with the freezer was caused by air infiltration. He had tested the seals, so he explained that the seal was not an issue. He said he had seen similar problems before where a fridge had gotten damaged in transit, which could account for the air leak. He did say he would contact LG to find out if they had any additional suggestions and would call back the next day. He did not call as promised, so I called LG and requested a replacement since this was was a brand new fridge. They said they would have to contact the repairman for his opinion before issuing a replacement. In the meantime, the repairman finally called back and said LG told him to replace the seals, which he had already tested (and had been tested by the prior repairman as well). He became quite surly when I told him that was not an option since the seals had already been checked by two different repairmen. LG then called me back and said that they would not replace it until the seals had been replaced since this was what the repairman had agreed might solve the problem. Furthermore, they stated that this repairman had told them he thought the problem was that I had been leaving the door open! I could not imagine that he would tell them this when I clearly had stated the dish towel had only gotten caught once and furthermore, that I no longer put a dishtowel on the handle. (In fact, I had purchased a special rack that hangs over a cabinet door, which he could clearly see.) I was appalled and insulted by this blatant disregard for the truth and implication that the problem was somehow my fault. I can only assume that he either did not want to admit he couldn't fix the fridge or he just wanted to be paid for another service call to replace seals that he knew were not a problem. Under no circumstances will I ever use this company again.

Description of Work
This was a service call for a brand new LG refrigerator which was building up frost in the freezer section. This was the second company sent out by LG for this issue.

Description of Work
Worst experience I ever had with an appliance company. Absolutely arrogant owner when I complained. With them, its their way or the highway... Colonel USA retired