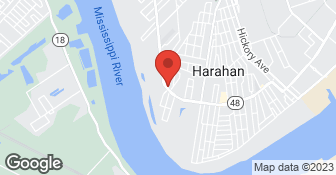 Ron-Del flooring is a locally family owned business serving the Metro New Orleans area since 1959. We are fully insured with FULL workers comp and general liability insurance. we have a crew that can handle any size job. 85% of our employees have been with us for over 20 years. We offer FREE Estimates....

They were awesome! The job looks great and I am very happy with everything they did. They were not the cheapest but worth the money. These people know what they are doing.

I wanted them to succeed. The workers and team leader were usually pleasant and friendly. The office salesperson was very helpful. My biggest concern is that they performed little quality control and assurance of their own work that I could see. They relied on me to bring up issues like loose tiles, misaligned tiles, missing thinset (hollow sounding tiles), missing grout, thinset showing through the grout,and tiles more than one credit card thickness from being flat (the latter of which they would not fix, saying it was not part of this type installation). This made me quite nervous during the installation and is the reason I rate their professionalism low. In my first and only major do-it-yourself tile job I did 12 years ago these are things I would have checked and doubled-checked even as a first-time amateur. The installation near the fireplace was initially very ragged and was eventually fixed to the original plan; in fact, in this case the finished product was good, however, the initial attempt was far from professional and not in accordance with the team leader's direction---leading to questions about their capabilities.. When I ask the tile installer why they didn't backbutter the tiles to get a flatter installation, he asked "what is that?" Then when I told him what backbuttering was he said that would take too long. He did not do minimum to check the flatness of the installation, like laying a board over the tiles--nor did his supereviosr check.... The good: the grout lines are good., the moulding replacement was well done, initially. However, when I called to discuss a .5 inch offset where the tile meets a carpeted area though; they acted surprised and questioned whether this was really true--- I double-checked it was off by .5 inch--leaving an uneven look that a professional would not do. It made me think: what standard do they have and what things may I have missed? Unfortunately, the replacement tile was set with more than 2 credit cards thickness of lippage and had to be replaced a third time. After much discussion with the owner and several visits about large areas with lippage and adhesion problems, he did replace the entire job with a new installation. However, there is still more lippage on this job than many others I have seen and more adhesion problems. His team returned after I complained to fix about a half dozen loose tiles on the 2nd installation. Also, this was an emotional hardship on my family as the work and rework took many weeks. My sister-in-law had a similar size job completed recently in her home by another contractor and did not have any of these issues. Update: I waited several months to submit this to see how the job held up. Just as I feared, some sections of hollow tile have become more hollow sounding--they actually rattle when you walk on them with your bare feet. Also, I have found other areas--damaged walls (small holes), carpet not attached in threshold, and broken moulding where they repaired their mistakes. I don't understand why this company has had such a hard time meeting basic industry standards of flatness and adhesion--even on second and third tries. While the owner has explanations of why certain procedures were not used--like back buttering--he still had an obligation to meet industry standards for lippage and adhesion. He failed to do that in a way I would say was acceptable. I would steer clear of them. I am still very dissatisfied with their work.

Description of Work
Installed tile in a 575 sq ft area, including den, kitchen, and entranceway. Moved furniture, replaced moulding, installed threshold, shaved 3 doors to fit, Installer performed a complete 2nd installation after they judged the first to be unacceptable from a flatness standpoint. Repaired several loose tiles after each installation.

They were responsive and professional. I haven't used them, yet.

I have contacted his company twice with two dates I would be available to have them do the work. I still have not heard back from him. I got a written quote and needed some time to think about it, and finally called to set up the appointment. I have left him messages the last two weeks and no one has returned my calls. The voucher expires on October 9 th, and I to get a refund before I lose the $99.

.. Since you could not use the Angie's list coupon you purchased for re-coating your floors because they had previously been treated with a wax type product, we applied the value you paid for it to the work we quoted you, even though it's not for re-coating. So you would not lose the value of the coupon even after the expiration date. I did attempt to contact you the day after you contacted my office, But I got no answer. This past week I had been out of town with continuing education in applied finishing, I did leave you a message as soon as I returned. We will be happy to schedule a date to start the work for you. Thank You
5.0

They came out to give an estimate. He informed me that the work cannot be completed. I need a much more intensive process. He was a nice person, just a bit delayed in getting back with me to schedule the appointment. So I just requested a refund.

Description of Work
I purchased a Big Deal for $99 for 100 Square Feet of Hardwood Floor Screening and Recoating.

We did not end up using their services.

Description of Work
We were unable to connect and make an appointment for a time that coincided with other work being performed on the house, so we did not use their services. They were courteous, however, so we may use them in the future.

They did a "B+" service. They kept sending me a rookie guy out here and he's knocking at everything and I had to keep him out.

Description of Work
I have used Ron-Del Floor Service Inc.

My floors look gorgeous! Ron-Del were fantastic to work with, they were professional, courteous and left my over 100 year old floors looking amazing! They were higher than other quotes, but worth it! Highly recommend.

Thank you for your feedback... We really enjoyed working with you, We appreciate your business. Contact us anytime if you have any general or maintenance questions. Thanks Again.
2.0

After taking off of work and waiting an hour at my house to meet the contractor the company called to say that there had been medical emergency and they would not be able to make it. Needless to say, after taking off two hours from work I wasn't a happy camper. I understand that emergencies happen and I thought for sure that they would accommodate my request to reschedule to an evening or a weekend appointment since I was inconvenienced and lost vacation time. Nope. I was sorely disappointed to find that they "don't do evening or weekend appointments under any circumstances". I said but surely just because you don't do them doesn't mean you CAN'T do them. They expected me to take off of work again to meet them rather than adjusting their own schedule to make up for my lost time. I am glad I found out about their inflexibility before hiring them.

Description of Work
Set up an appoinment to come out and provide an estimate.

Ron-Del Floor Service Inc is currently rated 4.6 overall out of 5.

No, Ron-Del Floor Service Inc does not offer warranties.

Are there any services Ron-Del Floor Service Inc does not offer?