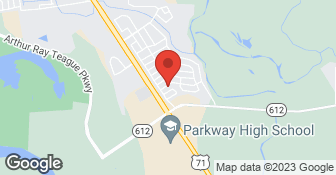 Description of Work
We had some plumbing problems, and they promptly came out to fix them. They could have charged more for what they did, but they gave us a break. We were satisfied with their service.

It was covered by insurance. He stayed to make sure that we had water. He went out of his way.

Description of Work
We used Long Run Plumbing because a pipe burst under the concrete. He ran a line through the attic for water instead of breaking through the slab.

I was hoping the problem was on the city side of my meter since the leak did not seem to affect the amount of water usage, but the city said it was my line leaking. Long Run assured me the leak was my responsibility and had to dig beneath the sidewalk to repair the line. My only complaint about the job was the large mound of heavy clay-like dirt was left on the lawn because it would not fit back into the hole. I was told that the workers had done the best they could to replace the dirt back into the hole and that the excess would 'dissolve and flatten' with time and rain. Due to the heavy clay consistency of the dirt that did not happen, so I had to pay someone else to come and relocate the excess dirt to my flowerbed. Since I live in an association, I could not leave the dirt piled up or the lawn service would not have been able to mow the grass in that area. I have used Long Run Plumbing since the early 1980s and this is the only complaint I have ever had on either of my homes they have serviced during that time. They have repaired toilets and water lines and replaced an attic hot water heater during those years, plus providing emergency service when stopped up lines backed up water into the bathrooms and flooded them.

Description of Work
Located and repaired a water leak beneath a front sidewalk.

Description of Work
My latest use of Long Run ended up with just a recommendation from the owner. We had what seemed to be a natural gas leak near a water heater. The responder asked several questions when I called to attempt to determine the extent of the problem. This led to him suggesting a couple of courses of action that I should take before he came out. During this process I determined that the leak was not really a gas leak but was resulting in a problem with the hot air duct at the top of the heater that was disconnected in the attic resulting in a back flow of incompletely burned gas being feed back into the heater room. I corrected the ducting problem and there has been no recurrence of the problem. Many plumbers would have just come out, not found a problem, and charged me for the experience and we would still have the problem.

Bonded
Insured
All statements concerning insurance, licenses, and bonds are informational only, and are self-reported. Since insurance, licenses and bonds can expire and can be cancelled, homeowners should always check such information for themselves.To find more licensing information for your state, visit our Find Licensing Requirements page.
General Information
Free Estimates
No
Eco-Friendly Accreditations
No
Payment Options
Check, Financing Available
Senior Discount
No
Emergency Service
Yes
Warranties
Ask for details

We specialize in commercial service to take care of any emergency plumbing services. Stopped up sewer and sinks, replace tubs and hot water heaters and repair valves on tubs and faucets. We locate leaks and then if possible, we take care of it for you. We do not do remodeling of any kind

Long Run Plumbing is currently rated 4.8 overall out of 5.

No, Long Run Plumbing does not offer free project estimates.

No, Long Run Plumbing does not offer eco-friendly accreditations.

No, Long Run Plumbing does not offer a senior discount.

No, Long Run Plumbing does not offer warranties.

Long Run Plumbing offers the following services: We specialize in commercial service to take care of any emergency plumbing services. Stopped up sewer and sinks, replace tubs and hot water heaters and repair valves on tubs and faucets. We locate leaks and then if possible, we take care of it for you. We do not do remodeling of any kind

Are there any services Long Run Plumbing does not offer?