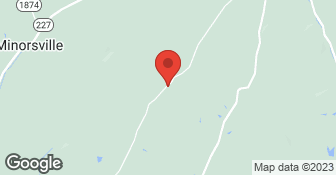 Isaacs Exterior Specialist- We are fully insured,free estimates, 25 years experience, travis- 859-285-9154 william- 859-621-2334 office- 502-535-5020 we do just about everything on the exterior of a house and even some on the interior. Everything commercial and residential. Our main specialty includes roofing, from shingles, to metal, to epdm, torch down, copper, and any other roofing systems. Also replacement windows, vinyl siding, hardy plank, stucco, interior and exterior painting, new gutter systems, room additions, framing, remodeling,etc... We also do some yard work like tree removal, mowing, landscaping...and many more....

They were responsible for putting on a 20x18 ft extension on our existing pole barn. The crew showed up the first day and dug the posts and set them efficiently. After that the entire project went downhill. The trusses on the existing barn were apparently not standard. They attempted to jerry rig the roof supports by CUTTING in more than 1/2 way into the 2x6 support and setting up the trusses in the cutout! They said they were going to reinforce it later. Obviously we told them this was unacceptable and they had to remove the ruined supports and order the correct trusses. It turned out they said it would take weeks for those trusses to come in so my husband ended up making some of them on his day off. The owners son is on the crew and wanted to make them out of soft pine instead of the normal standard harder wood used for supports. We had to demand the proper wood for the job. One of the supporting posts had moved after it was set. They put the barn up around it anyway. It was so bowed a gutter could not be put on properly and drain. We had to ask that they fix it. They did fix it but again my husband did most of the work. The actual placing of the metal is sloppy. They consistently misses screwing the supports when putting the metal roof on. You can see multiple screws on the underside of the roof where they missed the boards entirely. They also never used a chalk line when attaching the sides of the barn. The screws are in wavy lines with nothing straight or neat. We changed the color of the barn trim with this job. They spray painted over the old trim "to see if they could get it to match" but over sprayed all over the place. It looks sloppy and never asked us about painting the metal. When confronted about the mess he said he would fix it. Some of the "fixes" involved scrubbing with a solvent (which didn't clean it all up) or placing 3 scraps of siding on one corner where the overspray was. They never showed up before 10:30 except for the first day and also didn't get much done the days they were there. He constantly asked for more money in smaller increments to "buy supplies" which was not in the arranged contract. He said he had no cash flow. From a project management standpoint they never had everything they needed and would go to the store to get whatever they needed and come back hours later or not at all. The project took 45 days but could have been done in a week with an efficient crew and better project management. The main shingled house's roof was subcontracted out to a crew that did not speak English. I do not know their name. They completed the roof in two days and did an OK but not perfect job. The weather was a little cold to allow the shingles to set properly. I did not know this at the time or would have asked them to do it another day. I hope it will be ok. They could have cleaned up better but at least these guys showed up on time and actually worked hard.

Description of Work
Added on to a pole barn. Replaced roof on house and metal roof on barns.

Experienced in carpentry, drywall, and floors. Committed to doing it right the first time. I started working in the profession in 1995 and have worked on the residential and commercial sides. I am an individual operator, so I don't take on large scale projects. I am upfront and honest, and expect the same in return.  …

There’s never been a better time to transform you home with Champion of Cincinnati! Think of us as a one-stop shop for everything you need to beautify your home’s exterior: windows, sunrooms, siding, roofing and doors. Only Champion offers the superior energy efficiency of Comfort 365 Windows, industry-leading limited lifetime guarantee, and award winning products made in the USA. For over 60 years, Champion has been manufacturing and installing quality windows, doors and sunrooms while creating a seamless experience for our customers. More than 9 out of 10 customers recommend Champion. Not only do Champion products enhance your curb appeal, but can also lower your energy bills, improve the comfort level of your home and reward you with a high return on your investment. Experience the difference Champion products can make for your home today! ENERGY STAR®, NSA, AAMA, Installation Experts, VSI, BBB, NFRC  …

We offer many services, No job too small or big. Anything Exterior and some Interior.

Isaacs Exterior Specialist is currently rated 2 overall out of 5.

No, Isaacs Exterior Specialist does not offer eco-friendly accreditations.

No, Isaacs Exterior Specialist does not offer a senior discount.

Isaacs Exterior Specialist offers the following services: We offer many services, No job too small or big. Anything Exterior and some Interior.

Are there any services Isaacs Exterior Specialist does not offer?