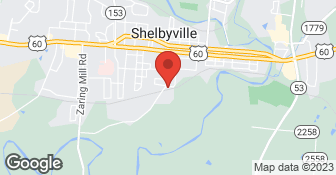 Very Satisfied. Prompt Estimate. Began work when they said they would. Completed work in very timely manner. Did a wonderful job and cleaned up nicely when done.

We first thought we had foundation issues when we noticed stair-step cracking along the front (both right and left sides) of our garage brick veneer. After a foundation company did some digging we came to realize the foundation was good, however the original builder had done us a disservice by not laying the brick on a proper cement block/base or using proper brick ties. Isabel came within 2 hours of contacting him to see if he could help our situation. Over time the brick had dropped and separated from the wall itself and was, in time, going to simply fall. He suggested to properly repair all the damage (it was fairly extensive on both sides of the front wall) he would have to demo the entire wall up to the gable and start over with a proper base for the brick. He would dig to see if there were proper footers/a base for the brick to start stacking, possibly pour a proper concrete support, rebuild the wall - matching the existing brick, and repair our concrete walkway that was partially pulled up by the foundation company upon their investigation. We met with Isabel and Revis on Tuesday, the following day a crew showed up first thing in the morning and the job was done by the end of the week. They addressed every concern we had along the way. The crew was even able to save all the existing trim and most materials to save on cost. Overall we are VERY pleased with the quality work that was done as well as how quickly they were able to start/finish the job! And, his bid was FAR less than 2 others we received as well :)

Description of Work
We needed to tear down and rebuild a brick wall on the front of our garage as well as repair/lay a new concrete walkway.

Not well. No professionalism at all!

Description of Work
Came to estimate the job after I had called him. Said he would call back either that afternoon or the next morning. He NEVER came back or called back. As a professional that is not acceptable. If he did not want the job hes should of been honest and told me that!

Mr Jaimes and his crew were very professional. Showed up when they said, very meticulous in their work and very reasonably priced. Would highly recommend this company to anyone needing masonary work.

The job went real well, the guys were friendly and professional. Isabel gave good advice and was helpful in deciding the decorative touches that were added.

Description of Work
Isabel and his guys did a great job! They poured a footer, layed brick and did decorative brick laying around the windows. Isabel came to give an estimate, came back a second time to go everything and show us what we need to do to get things ready. He returned a day or two later and dug the footer and in less than two weeks had the job completed! We plan on using them again in the future on another project and would highly recommend this company.

Isabel was patient with me, meeting with me several times to discuss what needed to be done. He also met with the insurance adjuster and the engineer the insurance company sent out. While the insurance company did not pay a claim, they did provide agreement with Isabel aas to how to do the repairs. When I got past the sticker shock, then pulled together the funds, Isabel and his men came and did the job. Isabel took time regulary to show me exactly how things were and also explain to me what he was doing. We consulted together, and were able to save some money in the process which savings he passed on to me. His employees were all cordial, hard working, and diligent. I have not seen any collateral damage from sloppiness or carelessness. A couple little things unrelated to the main job came up or were observed by him and they were addressed at no additional charge. In the process of the job, I had occasion to talk to others in general construction work and everyone I spoke to about Isabel James of Shelbyville said they either knew him or had heard of him and everyone had nothing but good things to say about him. The only thing left to do in a couple days is pressure washing once the mortar sets. Otherwise I am completely satisfied with the work.

Family owned and operated company with 6 years of experience. We can help homeowners with any type of concrete project. No job is too big or too small for us! We take pride in working hard and making sure our customers are always happy!  …

Jaimes Masonry LLC is currently rated 4.9 overall out of 5.

No, Jaimes Masonry LLC does not offer eco-friendly accreditations.

No, Jaimes Masonry LLC does not offer a senior discount.