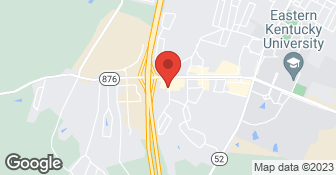 14 EMPLOYEES. NO SUBS. COST IS DETERMINED BY THE JOB. TRAVEL CHARGES MAY APPLY. SERVICE FEES APPLY. EXTRA CHARGE FOR AFTER HOUR SERVICE MAY APPLY. MAY CONTACT THROUGH EMAIL....

Fayette Heating & Air was founded in 1971 with one man, one truck and $500. From the start, Al Melrose was committed to providing quality equipment with integrity and outstanding customer service. As a second generation family-owned business, those same values lead our company today. Fayette Heating & Air has been recognized nationally, regionally and locally for both business practices and its community efforts.  …

NOW OFFERING FREE HOME WELLNESS CHECK! Our electricians have over 20 years of experience providing Electrical Repair & Upgrade Services, once you’ve had the Doctor Electric experience, you will never want anyone else in your Lexington, KY home. Customers trust our technicians and the electrical services we provide. We have the prescription for your electrical system! Call today for electrical services. We also offer 24 Hour Emergency Service Mon- Sat!  …

I provide many "around the house" repairs that take up your personal time and energy. Services provided are; installing ceiling fans, assembling furniture, hanging blinds, fence repairs, custom shelving, flooring, Vinyl siding installs and repairs, minor remodels, painting, trim work and so much more! I am a owner-operator serving communities in need of help getting their home looking beautiful and efficiently and operating up to par once again. I have been doing construction on and off my whole life and truly enjoy seeing the satisfaction my work brings others.  …

He showed up an hour late without any tools (who comes to a service call without tools???). So had to go get tools, which took another hour. Spent about five minutes looking at the heat pump unit which had a burned out control board. He admitted he was not familiar with this brand of unit, but said he could locate the part. For several days he did not contact us, and did not return our phone calls; he ostensibly made no attempt to find the part. Later we receive a bill for a service call plus a labor charge. This person is NOT recommended.

Description of Work
Performed a service call on heat pump unit which had stopped working.

My A/C froze up on Sunday 8/22/2011. I called three (3) A/C repair companies in my area at 6:30 A.M. on 8/23/2011. Allen's KY Mechanical returned my call at 8:10 A.M. and said they would put me in their schedule system and call me back with estimated time. I told them I needed to get to work for meeting and asked if they could come that morning. The dispatcher said yes, they would send someone that same morning and would call me back shortly with ETA. About 20 minutes later, the dispatcher called and said their service technician was on his way and should arrive shortly. At 9:00 am, Allen's courteous and professional service men arrived. I told him what the problems was, he checked the entire system and determined that freon was low. He added freon, a very minor problem, but checked outside system unit to be sure coils and other parts were working properly before it left. Working great now and I was able to get to work on time for my meeting.

Description of Work
My A/C froze up and was blowing out hot air. Allen's technician found freon needed to be added. Very minor issue, but he fixed promptly and he checked out the whole system, just to be sure nothing else was wrong. Now A/C works great and I can get a good night sleep.

I have a home warranty; the warranty company chose the contractor, made the initial contact, and took care of the cost for this after-hours, emergency work. In the morning, when I found out which plumbing company was chosen, I called it around 9:30 am to get an ETA. Was told that my house would be on the way to another stop in the same area. I called back at noon for another ETA; was told that the "other stop" was more complex; please be patient. I called back at 3:30 pm; was told, "I thought he'd be there by now." Plumber did call me at 4:30 pm to say he was 90 minutes away. He said his dispatch was "confused" about where he was working that day and that he was nowhere near me (despite dispatch having had cell phone contact with him all day). Plumber arrived at 6 p.m. Plumber tried to use my outside access pipe to clear the blockage; he said it was improperly installed and that he could not use it. To be fair, I agreed with him. He then recommended that we remove a toilet and access the plumbing that way--however, he said this move was forbidden by the home warranty company. He said he had no choice but would have to leave--sorry. I said, "Let's call the warranty company and discuss this." Warranty company finally agreed to allow removal of toilet to access the plumbing. Plumber snaked the line, but was unsuccessful in clearing it. Plumber re-installed the toilet, then suggested we use the basement access point which, when opened, would unfortunately cause raw sewage to drain into basement (or, in my case, large garbage can) until the pipes were emptied. This we did; he and I caught most of the sewage as it flowed out, and the plumber snaked the line from that point. He said the problem was fixed, closed up the pipes, packed up, and left. He had been there a couple of hours by this point and had spent much time on the phone with the home warranty company. I cleaned up the sewage that had splashed into the basement, and went upstairs to take a shower. It was after 8 pm. The problem had not been fixed; it was no better than before. Sewage was backing up into my bathtub. I called the plumber's cell; no answer, no response to the message I left. I called his dispatch; night dispatcher claimed that the warranty company was refusing to pay for the just-completed service. I called the warranty company; warranty company said that the service would be paid for and that they would call the plumbing company to say so. I called the plumbing dispatcher back; he said had no one to send out the next day to complete the work. Advised me to get someone else. I had to go to a hotel for the night. I did call a local man; the second plumber came the next day. He cleaned the pipe from the "unusable" outside access point with a manual snake, and all was well.

Description of Work
I had a main line sewage stoppage; water would not drain from the house. Toilets could not be flushed, washing machine and dishwasher could not be run. I could not use the shower. Main line drain stoppage; no sewage service at all in the house.

UNFORTUNATELY, OUR GUIDELINES ARE GIVEN TO US BY OUR CUSTOMER - AMERICAN HOME SHIELD. I AM TRULY SORRY THIS FELLOW HAD SUCH A HARD TIME GETTING THIS FIXED. I WILL SEE THE TECHNICIAN AND FIND OUT WHY HE DIDN'T CHECK THE WORK BEFORE HE LEFT. THAT IS VERY UNLIKE OUR TECHNICIANS TO LEAVE WITHOUT FIXING THE PROBLEM. IT MAY HAVE CLOGGED UP AGAIN. THAT IS POSSIBLE. NOT SURE WHY HE DIDN'T USE OUTSIDE CLEANOUT BUT WILL INVESTIGATE AND RESPOND. NOTE: WE HAVE NOT BEEN PAID FOR ANY OF THIS WORK. IT WAS DENIED. NOT SURE HOW IT SHOOK OUT BUT NO MONEY HAS BEEN PAID TO DATE.
1.0

They notched our joists and the inspector declared the home uninhabitable. Many mistakes were made during the job. The one that caused us the most trouble was the water supply line they installed in an unheated space which caused the pipe to burst and the house to flood. There was a point in time during the job where they disappeared without any contact for two weeks.

Description of Work
Remodeled two bathrooms for us and ran one water supply line.

THE MEMBER WAS ADVISED BY OUR STAFF OF THE UNHEATED SPACE ISSUE AND RESPONDED THAT IT WAS OK TO CONTINUE WORKING. THE ISSUE FROM THE INSPECTOR WAS CORRECTED WITH NO COST TO THE HOMEOWNER AND WAS ADVISED BY THE INSPECTOR IT WAS OK BEFORE WORK HAD BEEN COMPLETED. THE HOUSE WAS LIVED IN THE ENTIRE TIME OF CONSTRUCTION. WORK WAS COMPLETED AS HOMEOWNER WOULD ALLOW ACCESS TO SITE AND WAS SATISFACTORY OR THE HOMEOWNER WOULD NOT HAVE PAID THE BALANCE DUE. CONTRACT WAS FULFILLED AND WORK COMPLETED IN A SATISFACTORY MANNER THE WATER LINE BURST DURING THE FOLLOWING WINTER AND WE REPAIRED ALL DAMAGE FREE OF CHARGE EVEN THOUGH WE HAD EXPLAINED THE ISSUE BEFORE INSTALLATION. SEE NO REAL REASON FOR COMPLAINTS THAT WERE NEVER EXPRESSED TO US IN PERSON. THIS IS THE FIRST TIME HAVING HEARD OF THIS COMPLAINT, 3-31-08. MIKE ALLEN, OWNER ALLENS KENTUCKY MECHANICAL.