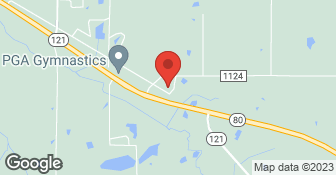 Free estimates, LLC we are all self contractors I run a three man crew. Additional email - carricotracey@yahoo.com....

We specialize in decks, patios, porches, concrete pouring, driveways, walkways, sideways, stone/brick work, masonry services, and more! We guarantee your satisfaction and we won’t leave until the job is done right. We pride ourselves on the quality work we provide, while delivering great customer service! Check out all the services we offer below and call -- or-- click to schedule a free estimate today!  …

McCuiston Roofing is the premier roofing company in our service area. We are licensed and fully insured. All of our installers are factory trained and certified insuring you a quality roof that you can count on. We offer up to a 15 year non-prorated Labor and Material warranty on shingle roofs and up to a 20 year leak free warranty on flat roofs. Both warranties are backed by the manufacturer. We are the only company in our area to feature a "Roofers Buggy"! The buggy is purpose built to protect your landscaping by eliminating the tear off debris from damaging your landscaping by lifting up and over your landscaping all the way to the roofs edge. This allows the debris to fall directly into the Buggy instead of onto the blue tarps that are usually draped over the expensive landscaping. All employees are drug tested, trained in and follow all OSHA standards. Ask about our many roofing certifications.  …

I never heard back from him after he looked at roof.

Roof repair was done and the company supplied before and after pictures of the work completed. They were very helpful in fitting my job into their schedule.

Mr. Carrico was fantastic. I called him due to several leaks in our roof. Not only did he contact me several times, but was able to send me information via text. What impressed me the most is how he was able to analyze the cause of each of the leaks - which were all caused by different problems...as an example, one leak was caused by rodent damage to an area on the roof. The best thing about him coming out to the house is that he explained exactly what was wrong and what it would take to fix the problems. Our roof has not had not work done on it in almost 20 years and I knew it will need to be totally replaced. However, I am waiting until I have funds to do this. Anyway, I also liked the fact that he told me that which of the two repairs might last longer than the third one. I was aware that you can only patch something so many times - so having him be honest about the work was appreciated. Now I have an idea what I need to start planning on....and he did not use pressure tactics on me to do a huge expensive job right away. I think his quote was reasonable. We set a date for him to come out to do the work...and I will then provide an updated.

Description of Work
Analysis of Problem and Giving Recommendations

Description of Work
Installed new metal roof over asphalt shingles. Employees arrived on time and did an excellent job. They were very careful with cleaning up all scrap.

They were extremely professional, very knowledgeable, priced right. We paid them at the finish of the job. Rain delayed them part of one day so they finished the job 1/2 day later than planned. That was just fine with me. They kept our yard clean and it was clean when they left. Their music was not loud and obnoxious and their language was clean. He kept us informed of what they were doing and if they were going to be delayed in coming the next day (he had a death and had to go to funeral so said he would come later in the day and he did just that). I would highly recommend him. He is Tracey Carrico of 3 C's Construction. He specializes in metal.

Description of Work
They put a metal roof on our house.