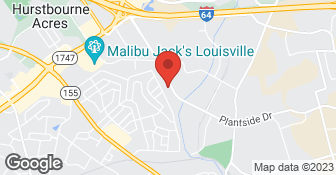 Full service flooring company providing Carpet, Hardwood, Laminate, Ceramic, Vinyl, Bamboo and Cork. A secondary division of our company provides window blinds and draperies. There are 67 employees company wide in 8 locations serving Kentucky and Southern Indiana. We have professionally trained installers on staff to oversee projects so that flooring is installed according to manufacturer specifications. Our flooring comes from major name brand manufacturers and we support you on all manufacture warranties to ensure worry free service and reliability. ...

We were required to purchase our flooring at the Flooring Gallery. During our selection process, we were directed to the referenced location and to meet with the manager to make selections and see what was available. It was our understanding that he was familiar with the options that our builder includes, but actually, there was much confusion between them. Once that was ironed out, we proceeded with the many things to choose. We had planned to have hardwood in much of the lower level and the manager at this location recommended a particular product. He extolled the many virtues of it, said its "their best seller" and that we should use it. We liked it and selected it. Actually, it was the easiest selection we made that day. When it was installed, the installer called our builder to advise that it appeared to be milled wrong and he stopped because there were, what he believed to be, unacceptable gaps between the boards due to the milling tolerances being inadequate. The Flooring Gallery called and advised that they had 40 boxes and only needed 27 so they planned to take all of the product there to cherry pick the "good boards" and make sure that it looked good. They began the tear out and re-install on a Friday. That night, I went by the house and nearly 1/2 of the job was complete, but there was severe gapping and inconsistent spacing throughout the floor. Large spaces allowed for a quarter to be rolled on its edge down the space. I attempted to call the builder and my realtor to advise, but didn't get a return call back until the next day, after the install was complete. I subsequently advised him that the floor looks terrible and we would need to chose another product to be re-installed. The Flooring Gallery called on Monday to schedule a "meeting" on Tuesday at the house to "discuss the floor." I couldn't understand what they wanted to "discuss," but agreed. This meeting was an effort to "brow-beat" us into taking the floor as installed. They had the Flooring Gallery manager, the manufacturer representative, the distributor representative, the installer and the builders present. They actually asked, "So what's your issue with the floor. So, I had to take them, board-by-board and show them the gaps. (see photos) I made it very clear that we would not accept the floor that was currently installed. I received a call that night from the manger telling me "that the claim had been accepted." When I asked him what he meant he explained that they could not proceed until it was determined who would be accepting responsibility for the defective flooring. It would take about a "week or two." They expected me to wait another 2 weeks before they reinstall THEIR defective product. Said it was "Flooring Gallery policy." After demanding that they get to work to correct THEIR error, they relented a couple of days later and said they would let us pick out a new product to install. It was quite the run-around and very lacking on customer service. Our carpeting, while nice, sits on a pad that has, what feel like, round discs that I can only assume are attached to nails that hold it down. They are everywhere and are very uncomfortable underfoot. The vinyl flooring is not glued down, we are told that its a "special kind" that is held down by the shoe molding. The ceramic tile is nice, but the grout has a couple of places where it doesn't meet the tile (too little used). Woule not recommend

Description of Work
Installation of carpeting, ceramic tile and hardwood flooring in a new construction home.

At Door to Door Flooring we specialize in hardwood installation, hardwood refinishing, tile installation, laminate installs and vinyl floating installs.Our motto is the folks you can trust with granny. We are a small but growing business with nothing but 5 star ratings. We value trust, hard work and efficiency. Let us show you why we are the best install and refinish crew you will experience.  …

We are a small family owned business. We have 10 years experience in flooring installation and we can take care of all your flooring needs, from wholesale pricing on quality products, to tear out and installation. We pride ourselves in quality work done efficiently. Our team is extremely knowledgeable on many different types of flooring, and will help you make the best decision for your next home flooring project. CK FLOORING-Turning houses into homes one at a time.  …

Regal Flooring provides high flooring services for owners residential and commercial properties in Clarksville, IN and the surrounding areas. We combine expertise with the best products and state of the art tools and equipment to provide great work. No matter the size of your project, we are fully equipped to deliver in an efficient and timely manner. We are licensed for your peace of mind. Call Regal Flooring in Clarksville, IN now to discuss your flooring services needs with our experts, to schedule an appointment with us as well as to find out more about all of our available services.  …

How is The Flooring Gallery overall rated?

The Flooring Gallery is currently rated 3 overall out of 5.

What days are The Flooring Gallery open?

The Flooring Gallery is open:

What payment options does The Flooring Gallery provide

No, The Flooring Gallery does not offer eco-friendly accreditations.

Does The Flooring Gallery offer a senior discount?

No, The Flooring Gallery does not offer a senior discount.

Are warranties offered by The Flooring Gallery?

What services does The Flooring Gallery offer?