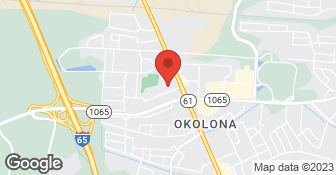 Plantasia Landscaping is a Landscape Construction Company specializing in all phases of Hardscape and Softscape Landscaping...

I am incredibly pleased with the results.. Ken, the owner, worked with us extensively over the winter and early spring to get us a plan that we were happy with. The job took about a week and a half, Ken was on site every day. Many days he was helping the crew. I took great comfort in this, knowing we worked so closely with him on the plan. The crew also paid close attention to insure the patio drained properly. I would recommend this company.

Description of Work
We wanted to have a 17x21 ft paver patio built off of our deck. The ground was not level so they put in a retaining wall and constructed a seat wall over that. 3 steps were also build in addition to a landscape bed along the deck.

When Mr. Wieting, the owner of Plantasia Landscaping, came out to give us an estimate, it was June 11, 2015. He told us he could build a retaining wall and raise the bed up to make it more level. He also said that the soil was very poor and he would remedy that by putting in top soil. He said he would add some more plants to what was already there. His estimate was $4068.75. The work was supposed to start on July 29, 2015. We waited but no one showed.up. They came on Aug. 3rd. After the wall was finished, on Aug.6th they brought in the topsoil, They dumped it in the area covering about two thirds of the garden space. I tried to catch him on several occasions when he would stop by for a few minutes to see how the work on the wall was going, to ask him what plants would go where, but he was always in a hurry and didn't have time to sit down with me. Finally he drew me a rough drawing of his plan and emailed it to me. I called him the next day to make sure that the plants he had picked were hardy for my part shade garden and he assured me they were very hardy. I had done some research on the plants he suggested and liked the way they looked. On Aug. 7, Mr. Weiting and his crew came to plant the plants. Some of the plants were different than what we had agreed on. When they planted , there was no topsoil at the top of the garden where the cypress bushes were to go. When I questioned Mr. Weiting about what he had said was poor soil, he said that it looked fine. Within a week, after watering according to his instructions, the five cypress bushes were turning brown. I called Mr. Weiting and asked him to come out and look at them. Instead, he sent someone to take them out and bring them to his shop to inspect them because he said that he couldn't understand why that was happening. Within a week five new cypress were planted but he never informed us what he found. By the second week, these plants were also turning brown. My husband called twice asking Mr. Weiting to come look at them. He never returned our call. Instead, he sent a letter telling us that since he had replaced the initial plants he could not replace the second planting because in his opinion, it was not a good choice. I believe that Mr. Weiting did not prepare the soil that he called poor, for these plants to survive. Once Mr. Weiting was paid, there was no verbal communication from him.

Description of Work
Mr. Wieting built a retaining wall for a small garden on a fall away lot, raised the bottom part of the garden with topsoil and planted plants that he suggested along with some plants that were already there.

The 5 plant items in question have already been replaced once they were damaged by unknown reason. We recommended another plant item more suitable but the customer rejected our recommendation. The second planting has also been damaged but we cannot replace them for the third time. We do warranty our work but when problems occur outside our control we cannot replace or repair these problems at no cost. After 20 years in business we try and offer our best recommendations.
5.0

Description of Work
They built a zen garden themed patio. It's really beautiful. We had come up with the idea and initial design and then Ken tweaked it and redesigned it for this climate with suggested plants etc. We are still working out a couple kinks with mortar that cracked but overall we love it. Ken was very professional and knowledgeable and I would definitely recommend them.

Description of Work
Put down large patio area including steps and lighting. Owner (Ken) is on jobsite everyday and had several great ideas to make project better. Work was done very well and with a lot of attention paid to making sure everything is level and lined up correctly. Would definitely recommend.

My experience was fine, they did an excellent job. They were on time, they were clean. They were very nice.

Description of Work
I used Plantasia Landscaping to mulch and redid some bushes for me last spring.

Description of Work
Plantasia renovated the front foundation landscaping of our home this past spring. This job followed a major hardscape/landscape job (a $20,000. job)on the side of our home last year. Ken Whiting of Plantasia is an exceptionally talented and creative designer who then follows through with excellent execution and follow-up. He is a hands-on owner who makes sure the job is done right! We've recommended Plantasia to many friends and neighbors.

It went extremely well. These people are pros. The nature of the work creates a lot of mess but Plantasia made a point of cleaning up at the end of every day. There was a great deal of excavating to begin with to establish the new walking paths. In order to save money, pavers were installed on top of concrete patio negating tearing it out. New plant material is beautiful. I would definitely use Plantasia again, and plan to.

Here at Custom Lawn Care, we specialize in landscape design and install, hardscapes (paver patios, retaining walls, natural sidewalks, etc) and LED lighting. We do full maintenance for residential and commercial, which includes mowing, fertilization, mulching, and pruning. Our work is guaranteed and we strive for customer satisfaction.  …

I am a owner -operated business. I provide good customer service , I will go beyond the limits to make a customer satisfied. I've been in this line of work for 5 years. I was working for my father and I think I have gained enough confidence to run my own business. I was one of the hardest workers my father had. I got nothing but good feedback and customers saying I should start my own business. When they had a issue I always fulfilled their needs. I have a lot of pride in my work. My goal is to grow a business and one day get known for my work and wouldn't have to use this site to get work.  …

Hancock Landscape is a design and installation landscape company I began in the Spring of 1996. Since starting my business, I have designed, installed and serviced thousands of projects in Louisville, Kentucky and the surrounding areas. The majority of my business is generated by references that come from satisfied customers. By working hard to satisfy my customers' wishes, I've been able to operate with very little commercial advertising. We've been able to successfully meet the expectations of my customers by incorporating their ideas and desires with my landscape design abilities. The result is an overall landscape plan that transforms previously overgrown or wooded areas into space that is attractive and usable for customers. I am personally involved in every project.  …

Insured
All statements concerning insurance, licenses, and bonds are informational only, and are self-reported. Since insurance, licenses and bonds can expire and can be cancelled, homeowners should always check such information for themselves.To find more licensing information for your state, visit our Find Licensing Requirements page.
General Information
Free Estimates
free verbal estimates
Eco-Friendly Accreditations
No
Payment Options
Check
Senior Discount
No
Warranties
Yes

How is Plantasia Landscaping overall rated?

Plantasia Landscaping is currently rated 4.4 overall out of 5.

What days are Plantasia Landscaping open?

No, Plantasia Landscaping does not offer free project estimates.

No, Plantasia Landscaping does not offer eco-friendly accreditations.

No, Plantasia Landscaping does not offer a senior discount.

Are warranties offered by Plantasia Landscaping?

What services does Plantasia Landscaping offer?

Are there any services Plantasia Landscaping does not offer?