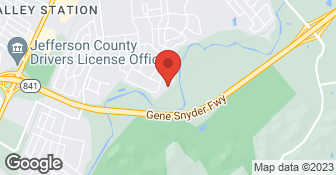 Commercial & Residential plumbing company serving Louisville, KY & surrounding areas. We offer services for commercial & new construction as well as residential maintenance services. We have some of the best technicians formerly from the "big name" companies ready to provide even better services at a lower cost....

Knowledge, expertise, customer service, honesty, integrity, and any form of professionalism are COMPLETELY void here. Company was contracted for bathroom remodel--$3200 worth of work done incorrectly, owner did not pull permits as discussed, caused damage to walls/ceiling/newly installed tile in adjacent rooms, allowed a worker to bring a child to job-site who was left unattended, child proceeded to walk the house with a knife cutting/destroying various items, once water was back on the improper installation resulted in flooding. ZERO accountability was taken by the owner who once informed of the issue just outright refused to accept a phone call, claimed he "stopped by house and no one was home" however, my wife works from home-was never away from her office with direct view of front driveway, then finally texting his refusal to correct work or refund invoice amount for correction of job. After two other BBB accredited plumbing companies inspected installation it was determined not only was work unpermitted, it was not done to code, completely useless and outright ILLEGAL. All work had to be ripped out and completely redone by another contractor, all parts for damage caused to bathtub had to be repurchased, owner left atleast a dozen parts "that were not needed" in the box resulting in a very dangerous installation for which he then denied completing yet made accusations that supplies were not present, and then would not correct, would not reimburse for in any way. Save yourself, hire someone... anyone... else.

Description of Work
I use them for plumbing.

Austin Bryan Plumbing is currently rated 3.7 overall out of 5.

No, Austin Bryan Plumbing does not offer a senior discount.

Are there any services Austin Bryan Plumbing does not offer?