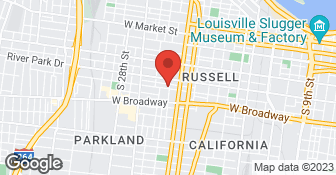 Hello everyone my name is Robert Walker I am the owner of A-1 Bob the Builder & sons. My construction company offers many services through out surrounding areas of Louisville, Kentucky I usually work with three employees. A-1 Bob the Builder & Sons offers many services such as New Construction, Remodeling, Room Additions, Kitchen and Bathroom Remodeling Repairs, Brick and Brick Repair, Chimney and Chimney Repair, Concrete, Wood Deck, Fences and Fence Repair also Ceramic Tile and all types of Masonry work....

The projects could not have gone smoother. Mr. Walker is professional and very good. His ideas saved me money and made the area much more useable. We had a patio installed for a hot tub and had a drainage issue addressed on an existing patio.

Bob built me some new concrete steps for my front porch. He did excellent work and completed the job in a timely manner.

Terrible, very poor craftsmanship. I had to request tear out and do over at least six times due to shoddy work. He was very upset because I watched as heworked. I will have to completely do one room over because the floor is full of racks between boards, tried to fill but just too many cracks He left all of his mess for me to clean up.

It didn't go well. I contacted Robert Walker ( Bob the Builder), to do some remodeling on my house. Each time he worked on a project, I had to pay in cash, not check or credit card. He agreed to perform the following services: Build a privacy backyard fence, replace four basement windows with glass block, build railings around front porch, water seal wood deck in back yard, and build a room, in the basement, a walk-in closet and place shelves in it and in other areas of the basement, (for a pantry). The front porch railings suffice, but the fence has lost slats and continues to do so, the back yard deck is splintering, and there is no finished room in the basement, closet, or pantry with shelves. The framing was completed for the basement room. I had another contractor complete the room, the closet and the pantry area. He tore the framing out as he said it was not level and improperly done. The cost of the basement work, including 4 window was: $2655.00. The total cost was: $6105.00 which Mr. Walker was paid. Often, Mr. Walker would not show up to work as he agreed to, as his incomplete work in the basement reflects that. I had to pay the other contractor to complete that work I had already once paid Bob the Builder to complete. Three of the four basement windows have been replaced with glass block, but the fourth remains unfinished and they were paid ALL for. Mr.Walker said he would clean them as they are covered with cement/concrete and complete the fourth one. He also built a shed in the back yard with a make-shift plywood door that had to be replaced. I have placed multiple voice messages to Mr. Walker, but they were not returned. The work Mr. Walker did complete was shoddy and much of it, unfinished. I have contacted the Indiana and Kentucky State Attorney Generals, the Clarksville Police Department, the WAVE Troubleshooter and am waiting for a response,and everyone else I could think to contact about the matter. The overall consensus was for me to take Mr. Walker to court. Court and attorneys are expensive and can be very time consuming. I do not have the financial means to take him to court unless I was guaranteed he would be responsible for all the costs. Much of the money I had put aside was paid to Mr. Walker to do work on my house. The rest of my money went to the other contractor to finish the work Mr. Walker did not complete. I want my money back for the unfinished work. I feel Mr. Walker, aka A-1 Bob the Builder & Sons is dishonest and disreputable. I am one DISSATISFIED customer. Beware of this contractor! He will royally rip you off!

Description of Work
It is not so much what he did, it is what he didn't do. He agreed to build a room, build shelves, and a walk-in closet in my basement. He framed the room and that was it; but not before he was paid $1875.00 for the job he did not finish. It was stupidity on my part to pay in full, but it was unethical and , of him.to not complete the work after being paid. He also did not replace a basement window with glass block as he agreed to do and it was paid for. The total of four windows: $780.00 0r $195.00 each.

Completed work was beautiful. Job site was clean. I could have not been more pleased. he actually got two more jobs in subdivision as a result of the work the neighbors saw even before he had completed the job. I would hire him again and recommend.

Renewal Gutters is a full service gutter and gutter protection company dedicated to offering the best products, service and warranties in the industry. We repair existing gutters, install new seamless gutters and offer the highest rated gutter protection with Arrow Gutter Guards. We protect your gutters and your home and keep you off of a ladder!  …

Born from the inventive mind of Gary Knudson of Knudson Manufacturing in Broomfield, Colorado, the K-Guard® concept was established in 1996 and first manufactured in 1997. Knudson’s experience with designing gutter machines began when his career did—working for his father out of their garage in May of 1965. In 1970, Gary took the helm at Knudson Manufacturing and has processed and received over 100 patents since. One of the most innovative of those designs is the fully engineered two-piece leaf free K-Guard® system, featuring a fully supported gutter and hood, a hidden patented hanger system, with improved aesthetics and additional strength as compared to similar systems on the market. K-Guard® received patent and signed its first licensee in 1998 and has been providing unprecedented home drainage systems ever since.  …

Whether you are looking to increase your living and storage space or simply improve the beauty of your home, the home remodeling experts at Distinctive Design Remodeling are here for you. Established in 2007 in Lexington, KY, we have been serving Central Kentucky with unparalleled customer service and dedication for several years, and we are fully equipped to take care of any and all of your home remodeling needs.  …

Frequently Asked Questions & Answers about A-1 Bob the Builder & Sons

How is A-1 Bob the Builder & Sons overall rated?

What days are A-1 Bob the Builder & Sons open?

What payment options does A-1 Bob the Builder & Sons provide

A-1 Bob the Builder & Sons accepts the following forms of payment: Check

Does A-1 Bob the Builder & Sons offer free estimates?

Does A-1 Bob the Builder & Sons offer eco-friendly accreditations?

No, A-1 Bob the Builder & Sons does not offer eco-friendly accreditations.

Does A-1 Bob the Builder & Sons offer a senior discount?

No, A-1 Bob the Builder & Sons does not offer a senior discount.

Does A-1 Bob the Builder & Sons offer emergency services?

Are warranties offered by A-1 Bob the Builder & Sons?

No, A-1 Bob the Builder & Sons does not offer warranties.

What services does A-1 Bob the Builder & Sons offer?

Are there any services A-1 Bob the Builder & Sons does not offer?