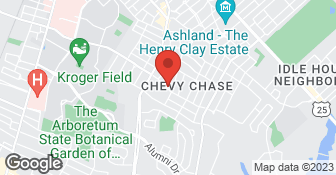 Never showed up, never called. An hour after they were supposed to arrive, I called to see where they were, and got no response. I feel it is important for a service to show up promptly and do the work expected, or at least call me to reschedule. I really needed this work done on time. I will be hiring someone else to do the work. I gave them a fair rating because I have used them before. But that is no excuse for not showing up.

Description of Work
I called them to clean a chandelier and replace the light bulbs.

Michaels main guy Justin came out and cleaned the windows like a champ. I have used these guys in the past. Always do a great job and respect my home. They wears these little booties over their shoes so as not to dirty our carpet etc. I always think that is very thoughtful.

Wayne and Justin showed up on time and cleaned the windows. The glass had been neglected by previous tenant. They brought light back into the room!

My windows had not been cleaned in years and they were very very dirty. They cleaned the windows very well and the glass gleamed. The window sills were very dirty and were difficult to clean. There were not as clean as i would have hoped. There were two sills that they missed and I had to point them out; they went back and cleaned they cheerfully. I would have thought that a small vaccum would have been better to clean the sills because of all the dead bugs that had fallen down. Or they could have taken the storms out completely, rather than use a wet rag. I also had my gutters cleaned and they also were very dirty, I would use someone else next time to compare the services because I have had a window cleaner only one time before. I would say that they were good and adequate.

Description of Work
Washed 11 windows with storm windows, 2 doors and a pair of french doors.

Michael Stewart and an associate showed up right on time. After pressure washing the house's exterior, they cleaned the windows screens, and sills inside and out, including 4 skylights and 10 clerestory windows. They are neat, work quickly and thoroughly, need minimal supervision, and are most professional. I would recommend them highly and without reservation.

Best $75 I spent on "Home Maintenance". I've referred this service provider to several clients already and intend to continue. Very friendly service, quick, and I feel like I definitely got my money's worth!!!

Description of Work
I just needed my 2-story foyer window to be cleaned and they offered to clean several others just so that I got my minimum $75 service call's worth of work. It was completely well worth it!

They did call saying they are going to be late.Otherwise when they appeared they did a good job.

Description of Work
Yes I did Fayette Window Cleaning. They cleaned our windows.

Fayette Window Cleaning came out and looked at our house and gave us an estimate for: 1. COMPLETE WINDOW CLEANING SERVICE INCLUDES: INTERIOR/EXTERIOR CLEANING OF ALL WINDOWS, DOORS, SILLS, SCREENS, AND TRIM $229.00 2. LOW PRESSURE HOUSE WASH SERVICE INCLUDES: REMOVING ALL MOLD, ALGAE, AND DIRT FROM ALL EXTERIOR VINYL, GUTTERS, SOFFITS, AND TRIM $199.00. The above is the exact wording in the estimate that was provided to us by Michael Stuart, Owner of Fayette Window Cleaning. We scheduled them to do the work on April 11th and they said they would be at the house around noon to do both jobs. We received a call that morning saying that because the temperatures would only be in the fifties, the pressure washing of the house couldn't be done. However, they could proceed with the window cleaning. They arrived shortly before noon and began work. When it appeared that they were nearly finished with the work I walked out back to check their work. To make a long story short, the glass in the windows looked great but the trim was not clean. There was both some dirt and some mold remaining on every one of the windows. When Mr. Stuart walked up saying they were done I pointed out the problem and he said that was trim and not part of the window cleaning. I said the estimate said that the window trim was including in the window cleaning and went in side to get a copy of the estimate to show him. He said he knew what it said because he'd written it. He had a cloth and started wiping on the piece of the trim saying it was mold and it wouldn't come off. I took my finger and wiped it off and said if I could wipe it off with my finger it should come off when it's cleaned with detergent and a cloth. I also said that the estimate didn't say anything about cleaning the windows and trim excluded any mold that might be there. Even so, ninety-five percent of what was there did come off with his cloth. To quote the owner, "we're not going to take a toothbrush and clean the trim" and that pressure washing the house later would take care of it. I said that if they hadn't delivered on what they'd said as far as the window cleaning why would I expect that they'd do any better on the pressure washing of the house and that we would not be having them do that for us. He said he couldn't believe that I'd "attacked" him and was dissatisfied with his work. I said that I didn't appreciate his attitude or his choice of words. I said the only reason our conversation had taken the turn that it did is that when I asked him why the trim wasn't clean he had first said that it wasn't part of window service and then when I'd produced the estimate saying it was that it was mold that wouldn't come off. He said that they had cleaned the glass and "wiped down" the trim. I said that I had expected per the estimate that both the glass and trim would be "cleaned", especially of dirt but if mold was excluded then it should have been stated in the estimate. This was not a pleasant conversation and I finally said that I would write him a check and that he needed to leave. He said that he wouldn't take the money unless I was happy with the job. He said that he would get a ladder and that he wanted to me to go with him window by window as he wiped the trim down again. I told him that I was working from home that day and that if I'd had time to go window to window supervising the cleaning of them, I wouldn't have hired him in the first place. I told him that he need to take the money and go because I was out of both time and patience. Mr. Stuart quoted his record of stellar service and said that if I could find another window cleaner to do a better job that he'd pay for it not and for the next ten years. I don't know about another window cleaning service but I could do a better job and I told him I'd do it myself and to please leave. I laid the check on the steps and went back inside. They went back around the house "wiping down" the trim took the money and left. I've hired a lot of services done around my house and I have never had anything like this happen. You shouldn't have to argue with someone or be accused of attacking them when you ask why the work you are paying them to do isn't being done. You shouldn't have to complain to get them to do a decent job to start with. If I'd hired them to simply clean the glass, I'd have been thrilled but they were supposed to clean all glass and trim and they knew what the job entailed (dirt and mold) because they came and did an estimate before the job was scheduled. Even after the second wiping down of the trim it is still below the standard I had expected it to be. I will never be using this company again. Mrs. Shawn Carey

They did a fantastic job. I needed the windows cleaned as we were moving and the lease required the house to be clean when we left. I had earlier had the carpets cleaned. The tech was considerate and wore some "booties" over his shoes while in the house. Great job indeed.

Description of Work
Windows cleaned inside and out.

Great. This is a small company. The owner does the work himself with two assistants. My days of climbing a ladder to do this work myself are over, but I need it done yearly at reasonable cost. Michael Stuart and his men meet my needs very well. The did the work by hand as opposed to a quick scrub and squeegee. They put down mats and plastic to protect everything and cleaned up all mess before they left. Cleaning the roof is a new idea to me. What's involved is rinsing it with a chlorine product to remove mold and mildew stains (mostly black with some green). It greatly improves the appearance of the house. People that do this work claim that it prolongs the life of the roof, but I have no independent support of that claim.

ThoroughWash is a local business which specializes in pressure washing, gutter cleaning and gutter guard installation. We take pride in our work and ensure quality workmanship. Request your free estimate today!  …

Jordan Cockrell’s Mulch and Landscaping is LOCALLY OWNED and focused on exceptional customer service. Owner Jordan Cockrell has over 10 years of experience and stays involved in every project from start to finish. Our dedicated professionals are trained to be on time, safe, efficient, and friendly. Give us a call today. We would love to earn your business! (Note: A quick thank you to all of our previous, current, and future customers for leaving reviews for us! We greatly appreciate you!)  …

We specialize in all phases of lawn maintenance, routine mowing services, mulch installations, yard clean ups, and more! We guarantee your satisfaction, and we won’t leave until the job is done right. We pride ourselves on the quality work we provide, while delivering great customer service! Check out all the services we offer below and call -or- click to schedule a free estimate today!  …

Fayette Window Cleaning is currently rated 4.4 overall out of 5.

No, Fayette Window Cleaning does not offer free project estimates.

No, Fayette Window Cleaning does not offer eco-friendly accreditations.

No, Fayette Window Cleaning does not offer warranties.