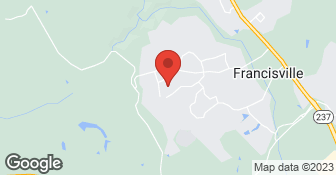 Authorized Refrigeration and Appliance Repair specializes in providing customers professional repair work. Serving the Cincinnati and surrounding areas, our EPA certified service technicians handle residential, commercial and industrial appliances. For fast service, we have a live dispatcher who ensures that our response time is immediate. There is no extra charge for nights, weekends or holidays. Our services include: Refrigerators and freezers Walk-in coolers and ice makers Washers and dryers (gas and electric) Stoves and ovens (gas and electric) Dishwashers HVAC products Our goal is to give you the best service and all our work is guaranteed! Call for an appointment today

Chris (he said he was part owner of Co.) came to my home to repair my washing machine. He explained the direct drive required a new gear and he also replaced the gears in the agitator. he was at my home for less than one hour, about 45 minutes to be exact and explained he had the parts already within his van. I began looking up the parts online to see how much this would all cost. The direct drive gears were less than 20$ and the agitator gears and replacement kit was 11$. So lets just say I was really suprised when he charged me 375$ to put in 31$ of parts. So I guess what I am saying is that it will cost you about 350$ per hour for them to complete anything as it pertains to repairs on your appliances. they are crooks stay away! They still have not given me any explanation of why it costs so much, except that is how much it cost. I could have bought a new machine for that price.

I set up an appointment for a Thursday for someone to come out between 10:30 and 12:30 and had someone at the house waiting for the tech to arrive. At 11:45 I got a call from the service tech that they hadn't even ordered the part, so he would have to come back the next day! I set up the appointment for 2-4 the next day, and he called at noon and said he could be there. I said I'd have to check to see if someone could be there, and by the time I called him back to say someone would be there at 1, he said he would probably be later than 1 because NOW he was going somewhere else. We did finally settle on 1, and when he arrived, he called me and said that it was going to cost me $285 to fix (it was $300 to have the entire cooktop installed by this same company a few years ago!) and he couldn't guarantee it would work, but if it didn't he wouldn't charge me. I pointed out the $300 price to install and he said they didn't install cooktops. I told him I was looking at the receipt and he asked me the color of it to make sure it was theirs (it has their name on it!). Then he said the least he could do it for was $240. I told him to just leave at that point.

He was nice, he told me there are only 2 men in his company that can work on my model (Samsung). He never told me he found fault codes, he never pulled my fridge out to check the coils/or the circuit boards. He told me he was confident it was the evaporator fan motor and quoted me a price and said he would be back the next day. I called to get a breakdown of the estimate and that was when things went bad, the gentleman I talked to started talking in circles to me saying that it could be the problem, and that they wouldn't know for sure until it thawed out. Then he said he didn't know what motor my fan is and but they have plenty of parts on their vehicles. When I asked how he didn't know when he should have had the model number, he said they didn't' write that down. HUGE RED FLAGS when a tech isn't writing down the model information in my book to ensure they have the correct part on their truck/van. I had told them after going around and around that I did not want them back I my house and I didn't trust them at all. I personally felt like they were lying to me on the phone and the talking in circles was so obvious it made me furious. I am not sure if they will bill me for the $50/home fee, but I am not happy with them and their double talk.

Description of Work
The provider came to my house to look at my fridge, he didn't pull it out, to my knowledge he didn't check for error codes. He said he was confident it was my evaporator fan motor and quoted me a price of $325. Told me to unplug my fridge, and he would be back on Saturday.

He was very honest with me. The technician was able to come out on the holiday. They were suppose to call me back on a question but they never did.

Description of Work
They repaired my washer.

All statements concerning insurance, licenses, and bonds are informational only, and are self-reported. Since insurance, licenses and bonds can expire and can be cancelled, homeowners should always check such information for themselves.To find more licensing information for your state, visit our Find Licensing Requirements page.
General Information
Free Estimates
Ask for Details
Eco-Friendly Accreditations
No
Payment Options
Check, Visa, MasterCard, Discover
Warranties
No

Authorized Appliance Repair is currently rated 2.8 overall out of 5.

No, Authorized Appliance Repair does not offer eco-friendly accreditations.

No, Authorized Appliance Repair does not offer warranties.