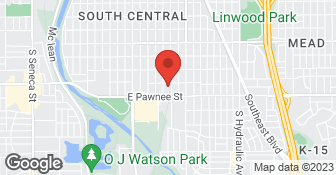 Gottschalk Roofing is a family owned business since 1955. Free estimates by qualified roofers with cost determined by the job. Elite certified by the City of Wichita. Preferred contractor for some of the local insurance companies....

I called Gottschalk to bid replacing my roof on my home in Park City. Jim had been there to do emergency repairs once or twice over the years due to storms and was very reasonable then, never charging me an arm and a leg when just a few replaced shingles would get me by. Because of his professionalism I wanted him to quote replacing the roof when the time came. I only got two quotes and Gottshalk was right in line with the other but most importantly I knew of their quality so hired them to do the job. The crew arrived on the day specified and tore off old roof down to plywood, checked it and made a couple of repairs, re-tar papered and re-roofed with new flashing etc. as promised. The crew hauled off all the debris and I found not a single nail in the yard or shrub beds (which were covered) afterwards. I was very pleased with both the quality and execuation of the job.

Do not trust Gottschalk Brothers Roofing with your home or property or anything else you value for that matter and do not believe a word they say. They refused to remedy anything pertaining to these problems with my roof or anything they were responsible for and did on my property. The way they treated me and behaved is an absolute outrage!

Description of Work
Long story short, Gottschalk roofing replaced my roof in May of 2012 and within three months it leaked. The longer story is that they were unprofessional to say the least. They were rude, they lied to me and the Better Business Bureau, they did poor work, they left messes all over, they damaged my property and left a gate open that allowed my dogs to get out. After the initial job, I went over a few concerns I had and they dismissed all of my concerns stating that nothing was wrong with the roofing job and they would stand behind their work. I was unable to thoroughly check the roof right away because I had knee surgery. When I did, I found more flaws and poor quality work. I sent Gottschalk Roofing pictures and an email showing these flaws and stating my concerns. There were exposed nails, shingles were not adhered down, there were bubbles and gaps in the torch down roofing areas and gaps along the edge of the roof where rain could go right in. They showed up at my home to "fix" these problems without consulting me first. I had two phone calls from them but did not get them until later that day, after they had already been there and left. So, I was unable to get on the roof with them and show them what needed fixed. After the rude messages, one stating that they "want this out of their hair", and after checking what they had worked on, i could not trust them again. I again found poor quality work, several messes and a gate was left open where my dogs are kept. The patch jobs looked even worse than before. There was tar hanging off of the roof and dripping onto my house, trim, my decking, my lawn furniture and my lawn mowers. They also left nails and trash. Furthermore, while working on the interior of my home, I found mold that should have been obvious to the roofers because it was in gaps in the roof decking. I was told there was no mold found. A flat out lie. They also did not remove the old decking, they simply covered it with new decking, there by covering up the mold. The receipt even states that the old decking was removed. Flat out lie. This so-called roofing company took my money and ran. To top it all off, my roof started leaking within three months. Exactly in an area i told and showed them!

Like I said, the roof is 3yrs old done in Sept, 9th,2009 after July hail storm. Noticed leak under edge of roof in August and had several Roofter come for estimates and 3 said, the shingles were defective probally when they were put on. Had Gottschaulk out in May 2012, after hail storm Gottschaulk said the roof was fine then, Sept 2012 said oh this is hail damaged and said get a 2nd Ins. person out here where we can show them, I set up a second meeting with my Insurance Adjuster on 23rd of October 2012, and of course quess who didnot show up "Gottschaulk" saying mix-up in messages in office and then a letter with nothing to say except but take it up with Tamko Shingle company.,I would steer clear of this Company but everyone has an opinion.

Description of Work
Had a new roof put on and new facica board. Now 3 yrs later defective shingles from Tamko were noted. Gottschaulk Brothers came out and said, "Oh this is hail damage" and ask for a second Adjuster which they Gottschaulk didnot show up for they seem to have problems getting messages to one another there. The shingles didnot bond well and the granules loss is excess so said, the 2nd Adjuster from Insurance, my shingles looked like they were 15-16 yrs old, he said. Use are your own peril.

First of all the member has been misinformed. The member called us out in early May to check a sway in the roof over the front porch which we discussed as being in the structure of the property. At that time the roof was in excellent condition with no granual loss. She commented how happy her late husband was with the quality of the job and our workmanship. In September the member called for us to check the roof for damage at that time Mr. Val Gottschalk found some hail damage and asked the member to call her insurance company. October 1st the member called and left a message for Mr. Val Gottschalk and said that the damage was to vents, flashing, guttering, etc. October 8th Mr. Val Gottschalk came out to see if the roof was repairable due to extreme sealing of the shingles. At that time we were not able to break the seals loose do to the repairs. Mr. Gottschalk talked to the member and ask that she call her insurance for a 2nd inspection. The member's complaint is that the roof was defective when we installed the shingles. If in fact we found any problems with the shingles we would have had the rep out A.S.A.P. It's in our best interest as well as the home owner's because Tamko would have paid us to remove and replace the roof at Tamko's cost. The member said she called the office to have Mr. Gottschalk meet for the second inspection, when or if she called no one in the office sets Mr. Gottschalks appointments but Mr. Gottschalk himself. Mr. Gottschalk was at the hospital with his wife that was having test run. The member was informed of this when she called to complain. The lady must be cold hearted and heartless. Sincerely, Jim Gottschalk
3.0

Company did not phone before coming as they said they would, so that I could adjust my job schedule and be here when they worked. I could not communicate with the crew; only at times was there anyone who spoke English. They worked super-fast, and I was afraid they might be careless. Sure enough, the flashing around one of the pipes on the roof failed after a big rain the following year. The company did the repair, and also paid for repair and repainting the ceiling inside. They did not clean up well; there were nails washing out of the gutters into the driveway and flower beds for a year and a half. They moved my barrel planter which took two men to reposition after I called. They moved rock edging and did not replace it until I complained, and then it wasn't done acceptably--again, I wasn't here. The first bill I received was an overdue notice. Sorry to be so negative, but I wouldn't use this company again if they were the only roofers in town.

Description of Work
After hail damage, the company removed one or two layers of old roofing, on different sections of the house, and installed new roof with additional vents. Insurance covered most of it, another $6000.

I cannot respond to anything from 1995 our record with the City of Wichita, Better Business Bureau, and WABA speak for us. Complaints should start with the company not posted on a web site 17 years later. Please check us out before considering the post related to something 17 years old.

All States Home Improvement LLC is a family owned home improvement company specializing in windows, siding, door, guttering and bathtub to shower conversion. We are currently not offering any Kitchen Remodeling Services. Since 1992 we have provided the highest quality siding (James Hardie Preferred Remodeler), windows, doors and guttering with professional installation for homes in Wichita, KS, and the surrounding areas.  …

At Farha Roofing, our focus is on each and every customer we serve. We have provided hundreds of Wichita homeowners, apartment and commercial business owners with peace of mind. Our goal is never to be the largest roofing company in Wichita - our goal is only to be the best.Roofing is an investment in the long-term value of your home, apartment complex or commercial facility. We appreciate the opportunity to earn your business. Farha Roofing assists with the insurance paperwork as needed. If your goal is quality and service, you have come to the right place. Award winning. Since our parent company's founding in 1978, we attribute our growth in Wichita, Kansas and surrounding communities to our interest in providing the most consistent quality, value, and accountability for every job we do. Please contact our Wichita office to schedule: 316-831-7510  …

Gottschalk Brothers Roofing, Inc is currently rated 2.4 overall out of 5.

No, Gottschalk Brothers Roofing, Inc does not offer eco-friendly accreditations.

No, Gottschalk Brothers Roofing, Inc does not offer a senior discount.

Are there any services Gottschalk Brothers Roofing, Inc does not offer?