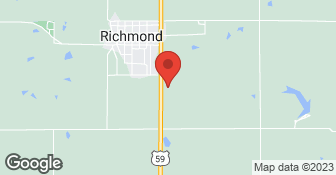 We saw the add in the paper for a building the size we needed. We called the home office in KS.and they sent Frank to explain the type of building and what all the job included. We liked what we heard and purchased the building.

Description of Work
We just met with the head contractor and will put the building up in August. He answered all questions and was easy to talk to.

The excavation and leveling of my property was done with a laser level and compacted very well about 3 weeks before the delivery of the post frame building materials. Because I was so impressed with the quality of the ground work, I hired the same company to excavate and construct a stone driveway for the new building, and trench for my electrical conduit from the house to the new structure. The building materials and crew arrived 3 days before the scheduled start date. All of the work was done with precision. The lumber used was mostly number 1 graded. I chose to have a ridge vent system which worked quite well during the subsequent 100 degree days. The concrete work was completed in 1 day, about 3 days after the post frame building was finished. All of the work done passed the county building permit inspections without incident. Per the contract, all leftover scrap materials were piled neatly for me to dispose of. I highly recommend Quality Structures, Inc., and would use them again if the need arises.

Description of Work
Turnkey Post Frame 30x40 Ft garage. Included all ground preparation and many loads of crushed limestone to build the grade up to level on my sloped property. Two overhead doors, 4 windows, concrete floor and gutters were all included.

Quality Structures Inc (QSI) provided a turn key job. The builders and concrete contractors were exceptional, detail oriented and if weather became an issue they were great about explaining the hold either for customer satisfaction of safety to crew. The exchange of information and focus on my needs and interest were discussed and the contractors would provide options of solution that included logic and not interest to get the done job quickley. That a lone impressed me.

Description of Work
Weather delayed start of construction and the contractor stayed in touch and as soon as the ground was solid they were on site within a few days. The stable was erected within 4 days. The quality was workmanship was great. Last minute changes were addressed and added without questions. Issues with the large garage door required several follow up visits and when they were not able to resolve. The sales rep called to let me know they were bring in a professional overhead door specialist to fix the door. The overhead door specialist was very professional and was able to resolve the issue. My friends and neighbors that stopped by to check out the stable were impressed. One neighbor commented the structure they had built did not include the amount of lumber the QSI structure had. My overall experience was great and would recommend Quality Structures to my friends and neighbors.

The fellows who did the initial building did a great job minus a few minor things like crooked window sills, and ceiling boards on trusses unsecured. The only trouble we had was after the concrete floor was poured. We had them build an above ground storm shelter out of concrete. After we brought in many tons of screenings, having it laser leveled and tamped down At our additional expense), they poured the safe room. That's when the trouble began. It was set 6" above the pad over what it should have been, plus the doorway was poured and set off square. They came in and built the frame for the house. When they started to pour the concrete for the house. they had to bring in another 2 truckloads of screenings to bring the pad up the additional 6" that the storm shelter put the whole thing off. Of course they didn't have the laser level or the tamping equipment that the dirt man had. Of course we had to pay for the extra screenings. I want to note that we had an extra truckload brought in that we planned on using as fill and around our farm. Well, they used what was brought to bring up the pad plus the extra that we had brought in rather than make up the difference in concrete which would have been more out of their profits. To top it off they used the treated 2x6s' that were suppose to go around the kick-board area inside the house as forms for the concrete and never replaced them. Instead they used untreated 2x4's on the kick-board which was going on top of the interior concrete. We paid extra to have them nail in stringers around the interior of the house with the 2x6 kick-board area and ended up with the 2x4's. We have called and asked about having them replaced after we found out they are more susceptible to moisture damage when they are against concrete. We have already paid an electrician to stub in elect boxes which are attached to the now in place 2x4's so not sure how thats going to end up. Funny thing is, when I told the fellow who did brought the dirt, laser leveled and tamped the pad that we needed more screenings because they had poured the safe room 6" over, he told me to have them tear down the safe room and start over. I truly believe I should have taken his advise. It threw the whole thing off. We now have less concrete than the contract said we should have so we are getting cracks after only 6 months. This also threw off the plumbing that we had sleeved in prior to pouring the concrete so our drains are all messed up. They dished out the toilet drains rather than just pouring over them. The flour is unlevel and the plumber is refusing to place the toilet until the floor is level or we concede that the toilet will leak and or crack the base some day. We had the company rep out and he said it didn't need to be level all the while everything else I have read plus my plumber is saying the floor needs to be level. The rep from Esh said he wouldn't believe that the floor needed to be level until the actual toilet is in. So, I bought a toilet yesterday and put it in place...it rocks. Now its a waiting game trying to get the rep back out here so he can see that yes, the floor does indeed need to be level. Problem is we have colored concrete and they will have to match it. I'm not as particular about the color match as I am about doing a rocking chair when on the commode. It's getting more and more difficult to get the rep back out here, all the while the plumber is waiting for the cement, the insulation is waiting for the plumber the drywall is waiting for the insulation and on down the line. For now we are stuck I want to note also that we saw the Esh company rep when he collected the first check and when he needed the last check. He never came out to see how things were going. They also removed a 4x6 treated post that was unused but left one roof truss that they didn't use. Kinda makes me wonder if they just forgot to put it in. Of course the concrete guys took all the 2x6 treated lumber they used on the porch. Addendum: The owner of company, Rob Pierce, paid for all repairs to be made to the floor around the toilet and for the extra screenings we had to buy. I want to add that the actual construction men were very polite and helpful. I do think he needs to rethink his choice in concrete subcontractor.

Description of Work
Built a post frame building that we plan to use as a home. Did all construction frame and concrete.