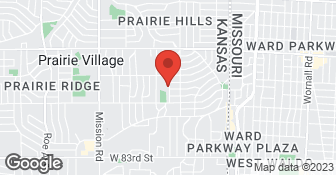 4 EMPLOYEES. USES SUBS. COST IS DETERMINED BY THE JOB. THERE IS A $250 MINIMUM FOR MOST JOBS. NO TRAVEL CHARGE. EXTRA CHARGE FOR AFTER HOURS SERVICE MAY APPLY....

Welcome to Kearns Heating and Cooling! We are committed to exceeding your expectations. As experts, we will handle your needs with the highest of quality expertise that your home or business deserves. We are fully licensed, bonded and insured. We offer competitive prices and customer satisfaction is our Number One priority. Call us today!

Ridiculous! He came out to the house, cut open the ceiling in our finished lower level, confirmed what I told him that the leak was from the toilet and said it would be "no problem" to fix it. Called him to schedule and confirm a date we had discussed. No response to my message. Four more calls and two texts later, after three days, he claims he was in Denver and there was "no reception in the mou...

DESCRIPTION OF WORK
Repair a leak from plumbing installation he did 4 years ago.

He kept delaying my mother's job after taking her money, even after she kept calling him. She eventually had to come to his house in order to confront him about getting the job done. I was very disappointed in his behavior in making an elderly woman wait so long to do a job for her.

DESCRIPTION OF WORK
He installed windows for my mother.

We will not be hiring this company anytime soon, he stated that he would get the contract in the mail no later than Saturday, June 14.  We should have gotten it no later than June 20th.  It has yet to show up.  Since they never return our calls, nor get information to us in a timely manner, we feel very uncomfortable trusting that Do It Right will come to our house and do the construction promised...

DESCRIPTION OF WORK
He gave us a bid on finishing our basement living area.  But we had to call him at least four times over a three week period before he answered the phone and said he would bring the bid over.  He came, we said we needed to talk about it but we really liked his ideas.  One week later we called him, after three tries on three different days (with messages left), he finally answered the phone.  We asked that he send us a contract.

First of "Do it right" is a different company, we are "Done Right Contracting Inc." One of the oldest and highest rated firms in our fields of servie. I was very clear with this client that we are in the middle of a large project and would not be able to start their project until August. Once we have a better idea as to when we would start their project(typically 15 days out). I would be in touch ...
5.0

It went extremely well.  The finished product is awesome.  Shawn has worked on many projects for me since 2009 including installing a new shower, putting in a French drain, repairing my deck and many repair jobs.  This project turned out beautifully and exceeded my expectations.  Shawn is very pleasant to deal with and goes out of his way to help with any problems you may have.  The people who wor...

DESCRIPTION OF WORK
Complete remodel and bathroom and kitchen.

This service was good and he is a good guy. He does what he says he is going to do and is fair. He lets me know ahead of time what he is going to charge and then gets here and does it.

DESCRIPTION OF WORK
I have used Done Right Contracting for several plumbing projects around my house.