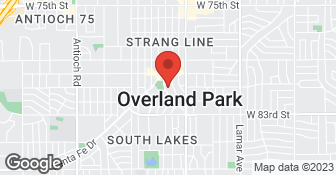 Petersons lawn & garden has been servicing Johnson county KS for over 15 years. From Leawood to Lenexa our goal is to provide every property with a pro simple solution for everyday lawn and landscape needs. Ask about our weekly lawn mowing prices for 2021!!!  …

We are providers of tree services and landscaping services in the Kansas City area. Our mission is to maintain the highest quality and professionalism from start to finish. We are confident in our results because all our jobs are custom for the needs of each home. We strive for the highest degree of quality products and workmanship. During the years in business, Jimmy Tree Service & Landscaping has satisfied many customers. It is our reputation of quality work, professionalism, and customer service our customers continue to rely on us for their needs. To understand the expectations of our customers, we take great care to work and communicate with every customer professionally. We base our reputation on service, safety, and quality. Call us today and find out how we can meet all your tree and landscaping needs!  …

four employees, no subs. Cost is determined by the job, and travel charges may apply. No Services Fees. May contact via email.  …

Matt was the first to provide a quote. He showed up right on time, and walked through his proposed plan. He pointed out some things to look for when comparing bids. This was priceless as it helped rule out one of the bidders. Prior to installation he stopped by to walk through one more time, and we went over the project schedule. During the job, the crew was very conscientious of minimizing the disruption to the turf, and prior to leaving, they made sure that they seeded the impacted areas. 3 weeks later and you can hardly tell that they were here. Rodney took his time in explaining the operation of the system, and the things to consider when you are setting up the programmer. He knows his stuff. All in all, this was a very painless project and a very good price. That equals outstanding value. Well done, men. Well done.

Description of Work
Lawngevity came out for a complete sprinkler system tune-up and did a fantastic job. They are the best in service and value

He did a good job, as always. Additionally, I was late getting home for the appointment, but he called my cell phone to remind me and waited at the house until I got home (an additional 10 minutes or so). He was gracious about it.

Description of Work
Turn off the sprinkler system for the season and drain the lines.

He showed up 15 minutes early and got right to work. He replaced 2 sprinkler heads that were broken. They were a style that he didn't normally carry and was going to pick them up at the store but I had 2 on hand for him to use. He fixed a broken line, checked that all sprinkler heads were properly adjusted and that all were working correctly. The entire job took him about 1 hour and only charged $59 for the whole service. I was very happy with the service and will definitely use Lawngevity in the future.

Description of Work
Lawngevity performed routine sprinkler maintenance. He realigned and adjusted any sprinklers that needed it and replaced 2 units that were no longer working.

They are great. I spend around $59 and they always have a special offer. Their professionalism is very good. I would use their services in the future.

Description of Work
We have been using the services of Lawngevity for turning on our sprinklers in spring and for turning them off in the fall for many years now. Their last visit to our house was around spring time.

He is a great person and does a good job. One other time some cable guys had spliced the sprinkler system and he was able to dig down and repair it and he put the dirt back very nicely over the hole that he had to dig to get to it. I have used him a couple of years now, and he is always really good. He comes to winterize it and gets it ready for spring.

Description of Work
He repaired my lawn sprinkler system. It was flooding in the garage. He left a job to come and fix it right away. He turned off the main water valve and he found the leak and had to reorganize the way it was set up in the garage.

Excellent, left a message after hours and received a call back the next day to schedule an appt. Was able to accommodate the day and time I requested. Turned on water, cycled through sprinklers and adjusted a few that needed it. Very professional - highly recommend.

GOOD COMMUNICATION WITH RODNEY THE OWNER. THEY DID A GREAT JOB WITH EVERYTHING AND REMOVED ALL THE LIMBS AND TRASH. THEY WERE A LITTLE EXPENSIVE BUT I DID NOT FEEL LIKE CALLING AROUND TO GET A BUNCH OF ESTIMATES. THEY MAINLY DO COMMERCIAL WORK SO I THINK I PAID A HIGHER PRICE.

Description of Work
THEY TRIMMED TREES AND SHRUBS AND RE-MULCHED THE LANDSCAPED AREAS.