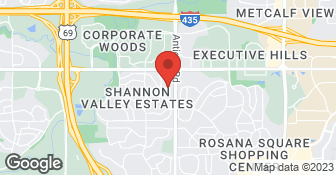 John Mahler has over 40 years of experience as a civil engineer and contractor. ClassiConcrete specializes in stamping, staining, polished concrete floors and overlayments. John will meet with you at your home to discuss the details of your project and calculate a free estimate. He will also provide you with picture brochures and references. ClassiConcrete provides a one-year warranty, however as a practical matter we stand behind our work for an extended period of time. Five time Winner of "Angie's List" Super Service Award....

Bordner Home Improvements (also known as Bordner Roofing & Bordner Installation Group) has been the preferred home improvement contractor of discerning Kansas Citians for 30 years. We offer Roofing, Windows, Doors, Siding, Baths, & more, and with over 80,000 happy customers, we're here to help with your next project. We have 158 employees. Use subs for some installations. Cost is determined by the job. No travel charges. Serving Johnson, Clay, Platte, & Jackson counties. Additional email - customerservice@bordnerinstall.com. Additional DBA - Bordner Roofing

No work was done to this point

DESCRIPTION OF WORK
We were going to have a new driveway, porch and sidewalk done as well as a new patio put in the backyard. We gave them a deposit as they requested and somethings have come up and we need our deposit back. No work has started and at first they said they would return our deposit and now they won't even take our calls.

We do not allow a refund of deposit when a customer enters into a contract then shops our bid to others.
5.0

He returned all the money I had given him, which was in the amount of $1,500. I believe it was the right thing to do.

DESCRIPTION OF WORK
Gave me my money back, after not keeping his appointments to do concrete work for me.

ClassiConcrete was hired to put in a stamped concrete patio.  We gave them 50% down (bad idea).  The patio was installed on September 3, 2013 by the sub-contractor Modern Concrete.  On September 5, the crew came back to remove the powdered release agent, forms, and seal the concrete.  After the concrete was sealed, we inspected the job and realized that there were stamping defects and areas where ...

DESCRIPTION OF WORK
ClassiConcrete was hired to pour and finish a 400 square foot stamped concrete patio.

The patio in question had some minor cosmetic surface blemishes called stamping cracks. These blemishes were touched up and the patio resealed. Their are no structural problems and the overall appearance of the patio is good. The first winter is the acid test for stamped concrete. Should the winters freeze-thaw cycles cause any damage they will be addressed in the spring, at no charge, under the w...
3.0

He did the work, then the concrete developed chotes, I called him, he came out, and he told me that they would be back to do some touch-up work.  I have called him over 5 times and he tells me that they will come out to fix the problem. It has been over 7 months of consistent contact and they still have not fixed the problem. After my complaint, John sent someone to repair the defect and it is rep...

DESCRIPTION OF WORK
They tore out the old patio, and poured/stamped concrete.

The quality of work looked good, however small pieces of concrete pulled up when they pulled up the stamp. We also have large cracks in the sidewalk. John told me that when he did the work he would push the concrete down, he stated that to today you do not find that quality. John quoted that his job was guaranteed for a year. Within a month, cracks were developing in the sidewalk and front step. A...

DESCRIPTION OF WORK
We had a new stamped concrete poured with a new sidwalk.