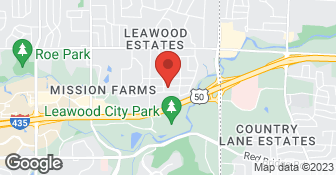 We are a company that provides a complete package for your remodeling and home addition needs. We can provide project design and then complete the build. We do small jobs like kitchens/baths/basements and also large jobs like home additions and complete tear-downs rebuilds. Free estimates. Give us a call when you care to build the best....

It went great. David works in Kansas City. I live 5 miles North of Lawrence. It was a 45 minute one-way commute for David, yet he drove it scores of times at all hours of the day. I spent much of the remodel working in Afghanistan and David would call me everyday on Skype so we could discuss issues, material choices and progress. He emailed me countless photos. He will communicate with you, so don't worry about that. I lost track of how many weekend's he worked. After I got home, I tore my rotator cuff and needed surgery resulting in a lot of work I had planned to do now being something David had to do. He took it all in stride and picked up the extra work with small additional cost because and quot;I'm already here, and have all my tools out here.and quot; The logistics of my job was much larger than he was used to. The only problem you'll encounter with Breckenridge Builders is actually getting on David's calendar. He does not advertise because he gets numerous word-of-mouth referrals from every single job he does. He is VERY busy, even during the depths of the recent recession he always had a lot of work, and a lot more in the pipeline. He is in such high demand because he is a very talented, does an incredible job, and is just a joy to be around. He is a lot of fun to have in your house. He makes the disruption of a construction project in a home you are living in a lot easier. Last but certainly not least, when it is all said and done, you'll have made a new friend in Dave Breckenridge. I'm putting a 30x12 front porch deck on the house right now, and I always have David to call or send a text asking a quick question. I had to fix him a plate of BBQ Brisket as a and quot;consultingand quot; fee though.

Description of Work
David remodeled my house by removing an ugly attached porch, expanding the size of the kitchen by 180sq ft, removing the wall between the kitchen and family room and turn the space into a large great room/kitchen with a 16’ vaulted ceiling. Some observations; His craftsmanship is incredible. Save your money and do not employ an architect. David will stand there in the space with you and help you design it right then and there. He is very knowledgeable about current styles and design trends. David knows all of the different material providers in Kansas City. If you are looking for a particular tile, or granite, or cabinet, or flooring, etc, etc, David knows where to find it and help get you the best price. Trust me - whatever you want to do David has probably done it many times and can give you a lot of ideas. Budget 10-20% more than you want to spend because as you are going along David will make suggestions that you will not have thought of. There are things that will come up that you could put off, but doing them while everything is all tore up during construction is simply the best choice. My kitchen/family room remodel ended up including a lot of landscaping because David had his BobCat loader on site and helped me move trees and shrubs around and fix the grade around the house to improve water running away from the house. He also let me use his big trailer and hauled gravel for my driveway. David is very skilled in ALL the construction trades, concrete, dirt work, frame carpentry, finish carpentry, flooring, tile, windows, appliances, cabinets, drywall, plumbing, electrical, etc, etc. He has the tools and expertise. He doesn't farm out work. He doesn't add cost to materials. You don't need to worry about waiting for some sub-contractor to get something done. David does it all. David will work with you if you want to do some of the work yourself and save some money. Make sure you establish a clear payment schedule because David doesn’t like asking people for money and will put off getting paid off indefinitely.

They provided excellent service. They came when they said they would and were done on time. They were flexible and help a novice select the furnishings that fit my budget. They looked at the space and provided great ideas. They also cleaned up after themselves leaving a wonderfully clean remodel.

Breckenridge Builders Inc is currently rated 5 overall out of 5.

No, Breckenridge Builders Inc does not offer eco-friendly accreditations.

No, Breckenridge Builders Inc does not offer a senior discount.