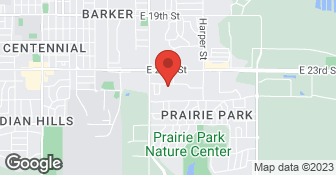 Family owned & operated since 1967 with locations in Topeka and Lawrence....

Matt and his helper arrived right on-time, explained what they were going to do, and went straight to work. They cut access holes in the ductwork (something that was NOT mentioned when the job was scheduled), removed the duct grilles, and ran their hoses. Three hours later they were replacing the grills and installing access covers (so next time will go faster). Matt was great -- found a couple of areas where debris from a past remodelling job was blocking air flow and removed it. Much better now! Only complaint (and it's a minor one) is that his helper was not familiar with removing grilles and reinstalling them. I had to replace several fastening screws because he couldn't figure out where they went and just left them lying there. Otherwise, they did a great job for not a lot of money. I would use them again.

It went very well. A couple small, slight matters with final cleanup, but that was to be expected.

They weren't able to pick up the rug for cleaning as originally scheduled, but they called and explained the situation. They called prior to their arrival on the rescheduled pick up day. They were professional and made sure I knew the time frame involved for cleaning and returning the rug. I did call about the return delivery when I had not heard from them in the expected time frame. They scheduled delivery for the next day. Again the called prior to arriving with the rug. The rug looked great and there were no strong chemical smells. I am sensitive to odors and was very pleased with the result.

Purchased a house built in the 60's which had been a rental for many years and then vacant for months. Having the ducts cleaned was high on our priority list. They arrived promptly, were very professional and cleaned up completely after they were finished. Highly recommend them and will use them in the future for other services they offer.

They were great. I wasn't there when they did the work, but my wife was there. She was happy with their work.

Great job. Recommended by friends who had a great experience and we did too.

Description of Work
Cleaned all vents in HVAC system

They were trustworthy- I left them there. I was very impressed with their work. There was one minor problem and they addressed it immediately.

Description of Work
They steam cleaned carpet and cleaned the vents/ductwork.

All went as expected. The air seems cleaner.

They were awesome. Very professional, thorough, prompt. Answered all my questions. They even moved some smaller furniture pieces i wasn't able to. This was the best carpet cleaning experience I've had. I will definitely use them again next summer!

Neighborhood Painting & Restoration is a painting and restoration company. We are a licensed general contracting firm, so we offer a lot more construction services than your typical painting company. We have been servicing the Kansas City area since 2002. Our work is exclusively completed by our in-house tradesmen; we do not believe in subcontracting out any of our services. Services we offer include interior and exterior painting, staining, carpentry int/ext., siding installation, deck construction, wood rot repairs, light remodeling, window/door rebuilds, and stucco stabilization for both our residential and commercial clients. Neighborhood Painting is a LEAD- SAFE- CERTIFIED FIRM- thru the EPA. The company gives a 5 YEAR Warranty and never charges for Estimates. Certified Lead Based Paint Contractor.  …

DC Solutions, LLC understands that your home is one of your largest and most important investments, and we pride ourselves in performing quality work that will leave you satisfied and confident in your home’s structure. We will assess your home's needs and provide a free estimate detailing the proposed repair plan. We will also offer you a description of the work needed and answer any questions you may have. With a variety of options to choose from, we are sure you'll be happy working with us. Look around our website and if you have any comments or questions, please feel free to contact us.  …

We are a family operated residential and commercial painting company, with over 13 years experience. We specialize in multiple different coating, from latex to epoxies. We have experience in just about any substrate you can think of. We also offer power washing, staining and sealing, and epoxy floors.  …

Chavez Restoration & Cleaning is currently rated 4.9 overall out of 5.

No, Chavez Restoration & Cleaning does not offer eco-friendly accreditations.

No, Chavez Restoration & Cleaning does not offer a senior discount.