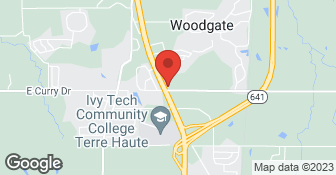 If You Have a Roofing Emergency that Needs Immediate Attention, DON’T PANIC! Honest Abe Roofing is here to solve your problems! The highly-trained experts at Honest Abe will treat your home like the castle it is and give you the respect … we clean up after every job, making sure we don’t leave any mess or nails behind. We offer the benefit of background-checked, drug-tested technicians. We know it is frustrating when you need service. It seems like roofing problems happen at the most inconvenient times. But not to worry. Honest Abe Roofing provides roof repairs and roof replacements for residential community. Find out how to choose the Right Roofer for your roofing problems and get your roof fixed TODAY!...

END GUTTER CLEANING FOREVER! We Install Gutter Covers and New Seamless Gutters. Our Forever Clean Gutter System is 100% maintenance free and effective, with our State of the art design, nothing but water will enter your gutters. Our product has no holes, gaps or large openings to keep all debris out. We have over 20 years of experience in the industry. We offer Senior and Military Discounts. Call us to schedule a Free, No Obligation Estimate!  …

it's not I can't it's how can I with craftsmanship  …

After at least 5 attempts, left messages on phone and also requested information on the website portal, no one even bothered to contact me. I was never able to even get them to answer the office phone. All I got was a recording telling me their office hours. I finally gave up and looked for another contractor.

The team worked quickly and efficiently. More than once my husband was shown where they were at in the process and what was being done. Our roof was in much worse shape than we realized. It is such a relief to have the work completed well and on time.

They came out and replaced the entire thing, offered to finance at a price I could afford, and the crew was quick about it. The field manager Evan was awesome with keeping me updated the entire time too.

Description of Work
My home needed a new roof after some bad storm damage in the area. Complete tear off was the best option due to the age of the roof.

It never happened was told it would be done in December (Purchased in September) They texted and said January. I live in Illinois. They were going to open my roof up in the winter? We tried to cancel several times after we heard we were being over charged for the job. Grossly overcharged. $18450.00 on a double wide is very high. When I tried to cancel it the third time I was told they already had the material and it was too late to cancel, however they said I could switch from a metal roof to the cheaper asphalt. Does that make sense to you? They charged us 10% to cancel per contract and tacked another 500+ on for a tarp they put on as a "Favor". Our mistake for being stupid. be careful what you sign.

The company was very unprofessional about giving us an estimate for our roofing job. They had done a repair for us a couple of years ago and had given us paperwork to show that they would deduct the price of the repair from our new roof cost if done in the next three to five years. I think they assumed we would just use them when we called to get the estimate on the new roof. They didn't give us a professional hand written proposal. They only jotted down a price on some old paper work we had from the repair job. They were very high priced for a basic 3 tab asphalt shingle. We called them back a week later to discuss their price and to inform them that we had decided to go with a higher quality shingle. They said they would get back to us with a new estimate. It took them almost two weeks to call us back and by that time we had gotten other estimates that were cheaper and more professional. We had already chosen a company to do the work. They still wanted to discuss our estimate with us over the phone and tried to say that there bid was lower than what they had written down for us on the day of their visit. We didn't like the way they skirted around questions we had about their crew, installation, workmanship and quality. They were not professional over the phone.

Description of Work
Estimate for removal of old shingles and install new shingles.

While the cost was a bit more than I had wanted to spend, I'm very happy with my new roof. The roofing advisor with whom I spoke was very knowledgeable. The roofing crew was prompt and efficient. The old roof was removed and the new one put on in one day. Cleanup of my property was good. I walked around my house after the crew left and found only 4 nails. Two days later, the gutter team came and replaced my gutters. All of the workers were polite and answered any questions I asked. One small piece of the contract remained to be done, and was quickly completed when I mentioned it to my roofing advisor. I have received several compliments on the appearance of my new roof. Suggestion for improvement: rather than giving the homeowner just the total for the job, give a breakdown of material and labor costs. Having already done research as to the expected cost of roofing for 2014, I knew that the total I was quoted was reasonable though not exceptional.

The workers showed up in a timely fashion. They were courteous and went straight to work. They even worked on Saturday. Afterwards, they were very good to clean up the worksite including a through sweep of the yard for roofing nails.

Description of Work
Very timely. Did a great job with the estimate and working with our insurance company.

They came to give us an estimate. Explained their products and gave us the info on doing the actual work. They were prompt the next day, and cleaned their job site up very well. Yes, we would use them in the future.

I set up an appointment at the Home Show because we were replacing our 30 year roof. Steve the salesman showed up on time and seemed to be very professional. He told me that my roof would need a specialist to measure and he would get back to me soon with a quote. 3 weeks passed and I hadn't heard from Steve. So I called and he said they had been busy but would come out the next day and measure so I would receive an accurate quote. Said he was sorry and that they hadn't forgotten about me. In the mean time I had 3 other companies come out and give competitive quotes. Steve never showed and never even called me back. I couldn't even get this company to give me a estimate on about a $20K job! I gave up and gave my $20,000 job to a company who wanted it.

Description of Work
Set up appointment for a quote.