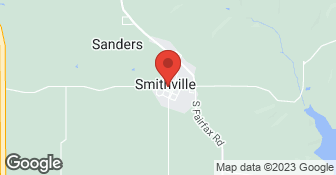 Our goal at JD Hostetter & Associates is to treat every customer honestly, fairly and respectfully. We treat you and your home the way we would want our home and family to be treated with an efficient, low pressure experience. This means that we are available when you need us — whether that be by phone, text, or email. No one makes the right decision under pressure. That’s why we take our time to help you understand the process so you can make a decision at ease. We give you options that fit your needs and budget and won’t try to upsell you on products or services you don’t need. If any problems arise after the project is complete, we are always available for you and will treat you like we treat our own family.  …

My experience dealing with DS Restoration was a nightmare. I've dealt with many contractors in my time and this was by far the worst. I felt my partner and I were taken full advantage of. The work he promised to do was never completed and not nearly satisfactory. The only thing he followed through with was demanding money. We had a mold issue caused from a pipe that leaked over time. Rather than finding the true problem he covered up mess and lied about what it even really was. This fraud caused my insurance rates to go up without prevailing the actual problem. The damage that he sent to the insurance company was never truly fixed. After several attempts to get more money out of me he sent inexperienced people to my home to fix the damages. They were all on drugs, smelling like pot and liquor not event competent enough to work and he had the nerve to tell me "well they are all I have to work with so you can accept it or not" while my entire house was torn apart. Like trying to bully me into having accept this unprofessional crap. I tried contacting him several times to say I was not happy with the work but never got a reply from him personally. He would send random scary looking people to my home to collect money for work that was not completed nor near satisfactory. The employees he sent to my home were very unprofessional. H*** two of them where his teenage step daughter and her teenage boyfriend who I found making out in my bathroom when I made a surprise visit on a Saturday to make sure the painting in bathroom was actually being done. What was done was complete damage to my vanity, walls and appliances. I am not kidding there was paint everywhere and the cut lines looked like a grade school kid did. They damaged my brand new carpets, walls and left debris messes behind for my toddler to breath, and be in. It was disheartening to say the least. This guy is scummy scammy smooth. You feel like you are talking to a good ok country boy that u can trust but once he is in and tears s*** apart, you realize you are truly dancing with the devil!! He also sent "professional painter" in to clean up his teenager kids mess and this guy was trying to charge me additional money (haha) because he was "professional and makes top dollar" so I said " you get your professional top dollar a** out of my house, NOW!! He sent anybody to my house to work doing trades they were always most certainly unskilled in. I had to fire this company, kick them out of my house and was never reimbursed for the undone work I paid for. He is gang showed up at 11pm at night smelling like dope saying they were there to finish the job on a school/work night. My kids were sound asleep in bed. This is where I drew the d*** line. Kicked them all out! I didn't care that my house was torn to h*** by then. It was worse h*** having them around! He committed insurance fraud and left my job unfinished and dangerous to my family and I would NEVER, EVER,EVER recommend this man to anyone. I wouldn't recommend him to shovel s*** bc I would almost guarantee you he would mess that up! He is a liar, untrustworthy and not professional by any means. I often seen him out at events enjoying spending the money w his family that he was ripping other families off for. Shane on his selfish greedy soul. I had to give it to God bc he is seriously a devil that I couldn't handle. The sad part is I fed them and gave them drinks in the beginning, and was planning to tip them close to 2k extra bc I am honestly grateful for those that do physical hard labor work. I have a soft spot for cleaners and carpenters.. I even paid him in advance to help him because he said he couldn't make his pay roll. He still screwed me. Call anyone BUT HIM. I have may photos to prove my case too. Inbox me if you want them. Got a pic of one guy nodding out trying grout my tile. disgusting! If you ever need me to go to court for u as a witness to sue him too then call me. Inbox me for my number. #PieceOFCrapDsRestorations Share this with as many ppl as possible. He victimizes vulnerable populations too. Single woman and elderly ppl. Cuz he knows a grown man would hand him is a** I am sure. Sent from Yahoo Mail on Android

Description of Work
Was a smooth good ol boy country boy talker- won my trust then tore my house apart, waited until I was in a vulnerable powerless situation then just literally abandoned the job and wore me out chasing him to attempt to put it back together again. Then when people did show up they were either his teenage kids or men that looked so messed up, were not competent enough to so the job and would come at random times in late evening or night. Then they were always trying to get more money. BE WARE of this guy names Drew!! He scammed me and my insurance company. Was w State Farm for 20 years and got dropped a month after hiring him :( was with them for 4 generations so this was embarrassing to say the least .