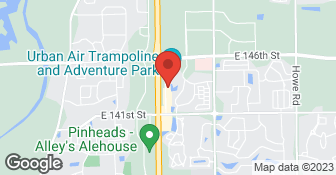 Communication was great with them and they let us know no work needed to be done.

Description of Work
Recent hail storm that hit, want someone to check out our roof to see if it needs work done.

Mr. Josh Wakley of Capstone Restoration came out and did a thorough investigation of my leaking roof situation. He explained why it was leaking, how to repair it, and how much it would cost to fix it. He was very professional in his approach and willing to take the time to address all my questions.

Description of Work
Needed an estimate for repairing a leaking roof.

We were pleased with the results.

Matt Haney and his team were great from start to finish! Matt is very knowledgeable and walked us through the process of having our roof replaced. His team was efficient, professional, and considerate, leaving everything in great shape (i.e. the roof looks great, the clean-up was great). Can’t say enough about Matt and his team...would highly recommend them!

Description of Work
Fixed leaks in roof, replaced all roof shingles, painted several interior ceilings which had water damage from the past.

Similar to the other reviewer's comment about you know you should never buy services from a guy who knocks on your door--so in March Matt Haney knocks on our door, apologizes for the interruption, introduces himself, and says that he was driving by our house and noticed our shingles appeared warped. He offered to climb up and take a closer look (we have a very steep, multi-angled roof on a two story with a walkout lower level I the back). I said sure and, while he's doing that, I'm checking him out on Angie's List, BBB, etc. Turns out Capstone Restoration is quite reputable. He shows me sections on the roof where he can pull up entire sections of shingles, stating that the damage was caused by wind (not hail) and recommended we contact our insurance company, which we did. Matt offered that if we were willing to enter into an agreement with him to replace the roof he would work with our insurance company and that there would be no cost to us other than our deductible should the insurance company approve replacement. The agreement included removing the current shingles and paper, replacement of any rotted decking (turns out we had some), new synthetic felt base, flashing, roof vents, and shingles of the same style and quality--everything for a complete, new, sound roof. Based on the Angie's List and other reviews, we signed up. The insurance company sent out an engineer; Matt came out and walked the entire roof with the engineer. The engineer concurred with Matt's findings and recommended a new roof. Matt dealt with the insurance company directly on the entire estimate and approval; our interaction with the insurance company was pretty much limited to getting the checks. Given the extensive rainy season it took a while before Matt's crew could start work. Matt kept us informed of the status and schedule. Once an opening appeared (i.e., 2 - 3 days without significant rain in the forecast), he had the materials delivered on a Tuesday, his crew arrived at 7:00a on Thursday, worked until after dark, came back an finished on Friday morning. We were pretty impressed how hard they worked--we have a large roof. Once done, they cleaned everything up--I've only found a couple of nails that were missed. Fair warning though, tear-off is a messy job and shingles are heavy; Matt's crew did good job of protected our plants, trees, decking, windows, etc. We only had a couple of plants that got flattened a bit (should bounce back). However, due to the nature of the job and material, you will get shingle "dust" on window ledges, decks, deck railings, driveway, etc., as well as some pieces of the old roofing paper. Not much that can be done about it, but not a big deal either. Matt was patient as we worked through the insurance payments and bank escrow and never asked for money until we had been paid by the insurance company. He also did not try to upsell us on anything. All-in-all, we're very pleased with the work, enjoyed working with Matt, and would highly recommend Capstone Restoration.

Well done job, from the estimate to the final payment -- they were respectful of our property and time and did a very nice job. Previous roofers -- I had to call and call again to get problems fixed. No problems (knock wood) after this job. I was impressed.

We were aware of several roof leaks on our 18 year old home, due to storm damage. Other homes in our subdivision were having roof repairs done with help of insurance. We admired the work being done by Capstone on another home in our subdivision (with the quality of the job being confirmed by the homeowner) and so we contacted the Capstone owner, Matt Haney, to look at our roof. He confirmed there was storm damage, and then proceeded to help us with communications with the insurance company, and was involved in all paperwork and insurance inspections, helped select new roof shingles (when the existing ones were proven to be no longer available), and then had his company do the work. All work was done very professionally and on-time, and the site was cleaned up after the project was completed. Matt himself, checked on progress each day. He also had painters work for him that came in and painted all the interior ceilings that had incurred some water damage from roof leaks. We were so impressed with Capstone that we actually contracted them to do some additional interior painting work for us.

Homeowners insurance company was contacted by Capstone and dealt with professionally. Once insurance company agreed to price, they commensed work and were done in 3 days. Clean up was average but whole experience was good.

Description of Work
replaced roof, some siding. some gutter

Normally, people tell you to not hire the guy that is in the neighborhood looking for roofing business. However, at the time, I was unaware of hail damage that went through mine, and Matt was quoting and found hail damage on my next door neighbor's roof. It turned out, he also completed a job a few doors down. He provided a free inspection and found that I had enough evidence for a claim. Not having want to wrangle with my insurance provider, he made this process EXTREMELY easy. He's worked with almost all insurers, knows what they need, and patiently waits for results and payment. In fact, this process is really slow (my insurance and mortage company paperwork). And he waited until they paid me before I paid him. Matt is a problem solver. Let's face it, roofing crews are usually concerned with getting the job done more so than anyting below when they strip the roof. Yes, some of my smaller plants suffered stress. Some marks on my siding. We also had nails that came through our screened potch. He made it right - clipped the nails and painted the nail pops. I wouldn't say a perfect score - but I'd give them a 95 out of a 100. Big roof - done in two days. No leaks, new flashing, a higher quality shingle - highly recommend their services.

Matt had been at my neighbor's home and found storm damage on his roof. While on that roof he had noted what looked like storm damage on mine. He came to the house and asked if I would mind if he took a look at the roof. He went up on the roof and took pictures and thoroughly inspected the roof. He believed the roof needed to be replaced. He worked with me and my insurance company and got the new roof covered. I only had to pay my deductible and some extra for the better quality shingles than the insurance company approved. Once everything was approved Matt was very helpful when I was choosing the shingles. He helped with advice about color, etc. He staying in close touch as the materials were delivered and let me know when the work would begin. We had to wait for dry weather but with the first dry day his crew was there and worked as long as they could. They did not leave until after 8 pm. The cleaned up as they went and things never looked messy. I have a large home with a complicated roof yet they completed nearly all the work in 2 days!!!!!!!! Unbelievable. This is a fantastic company and I highly recommend them. Very professional, clean, efficient, responsible. No complaints.

Description of Work
Put a new roof on my home.

We had lost shingles in a storm and Matt worked very hard to get my insurance company to cover the replacement. He was great to deal with and knew exactly what he was doing.

Matt Haney (owner) made this a simple and painless process! The day after I initially called him, he came to our home and prepared an estimate. Then, since we had damage due to a storm, he sat with me in my kitchen and made a call to my insurance company to initiate filing a claim. From that point forward he worked with my insurance company, keeping me informed every step of the way. Once our claim was approved, Matt returned with shingle samples and brochures/pictures. He thoroughly explained the difference between the various shingles and offered his opinion about color choices for our home. Once we made our selection, he placed the order and the materials were delivered in 3 business days. Our roof was installed the day after delivery. The crew cleaned up so thoroughly afterward that I barely could tell they had been here. Matt was professional, knowledgeable, and responsive. I especially appreciated his clear explanation of the process (particularly in light of our insurance claim) and timeline, and his continual updates. I always felt like I knew exactly what was happening and when the next step would take place--and it always played out exactly how and when I had been told. The roof looks terrific and we have had no problems with it thus far. We did have one minor glitch at the very end . . . a miscommunication about replacing/repairing some rotted siding that I thought they were going to do and was included in the price quoted. However, we were able to come to a agreement and Matt himself returned as soon as the weather allowed (just a couple of days) and repaired the area in question for a minimal charge (he even did a little extra painting of some trimwork while he was up there!). His willingness to compromise and resolve the issue resulted in a happy customer! I would recommend this company without hesitation and will definitely use them again if the need arises.

Description of Work
Capstone Restoration provided me with an estimate, submitted a claim to my insurance company, met with the adjustor, provided shingle samples, ordered all materials, removed the old roof, replaced rotted decking as needed, put on a new roof using upgraded dimensional shingles, installed ice and water shields/new ridge vents and flashings, and thoroughly cleaned up the area.

OWNER-OPERATED. NO SUBS.2012,2013 CONTRACTOR OF THE YEAR. COST IS DETERMINED BY THE JOB. NO ADDITIONAL TRAVEL CHARGES. NO SERVICE FEE.NON-SMOKER.MUST SEE JOB TO GIVE ACCURATE QUOTE PLEASE USE DIRECT EMAIL OR CALL ABOVE PHONE NUMBER.  …

Taylor Home Improvement is a family owned company based in central Indiana offering a variety of solutions for your home. Our professional painting team will provide free quotes and help with suggestions for your painting project.  …

Capstone Restoration LLC is currently rated 5 overall out of 5.

No, Capstone Restoration LLC does not offer eco-friendly accreditations.

No, Capstone Restoration LLC does not offer a senior discount.