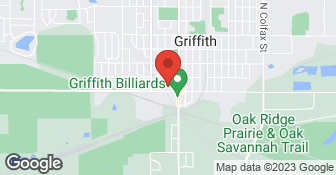 Today, Meyer’s Heating & Cooling offers the finest in residential heating and cooling products and service, as well as commercial heating, commercial cooling, home plumbing design and plumbing repair. We also offer dependable residential electric generators. If you’re looking for quality products, unbeatable service and trained professionals you can rely upon in Northwest Indiana, Meyer’s Heating & Cooling is the one-stop shop you’ve been searching for. Take a look at what we have to offer. Residential heating and cooling systems, electrical work, plumbing design and home plumbing repairs, heating and commercial cooling systems. We design, install and service what we sell from new system design and install, to existing system repair and maintenance. The members of our Parts Department are cooling and heating parts specialists and we stock plumbing parts supplies too. Easy financing for home heating and cooling systems. Maintenance plans to ensure the continued health of your residential HVAC system or your commercial heating or commercial cooling systems. Professional dependable service. Quality brand names including Bryant Heating & Cooling Systems - we are a Bryant Heating & Cooling Systems factory authorized dealer. Northwest Indiana’s most trusted provider since 1951. For additional information please call us and tell us your an Angie's List member. Additional contact name - Dave Conover....

Great, service person was over within an hour, work was done quickly and I was all warm and cozy again!

Very well my latest issue was a root problem that went all the way out to the alley. Water was backing up in the basement. The plumber handled it quickly and without issue.

Description of Work
I have used Meyer's several times for both plumbing and electrical work. The technicians are skilled, professional and friendly. It's a comfort to know that any issue I have will be handled correctly. They are also very responsive in terms of a quick turnaround time which is great! All the employees deserve a big hand.

I am not sure I went through Angie's List to find them, but they are on Angie's List. I have used them for plumbing work, and for HVAC. All that work was done over a year ago. I got a new water heater put in and a furnace and air conditioning system as well. I had estimates from other companies and they were definitely the cheapest. I had a bad experience with them with the water heater, but that wasn't related to getting my whole house re-plumbed.

Description of Work
For plumbing I use Meyer's Heating and Cooling. They were last here to re-plumb my whole house.

They installed the expansion tank. They left the instruction booklet after they left and I was reading it to make sure there weren't any special instruction or anything that I had to do on my end. I had ready that it needed to be installed vertically -- it said must be installed vertically. They actually installed it horizontally so I called them up and mentioned that to them. They had said they had been doing it for years and some applications require them to install them horizontally based on space requirements. They said basically if I wanted them to install it vertically then I was going to have to pay for them to come back out. I told them if they had read the instruction booklet they would have seen it must be installed vertically. They said I would not have any problems. So I ended up calling the manufacturer of the expansion tank and talked to their technical support team. I asked them why they put that in the manual and they said they put it back in there because the expansion tanks get heavy and if it is not supported properly in a horizontal position they can leak. Then I called the Myers company back and told them about that. They just kept saying if I wanted them to come out I was going to have to pay them. It kind of left a sour taste in my mouth because it was something the instruction said it should be done a certain way, yet they did it a different way. I have not had any problem with it and I ended up leaving it as it is because the manufacturer said it would be okay that way. But as far as following directions it would have been kind of nice had they actually read the instructions and followed them. I feel it should have been done based on what the instructions said and not previous installs had gone by. They just did it the way they wanted and just figured I would not say anything about it because I am young. I had spent thousands of dollars with them a year earlier because I had a furnace installed and a hot water heater put in you would think they would send a technician out to spend 10 minutes of time just to do it the way the instructions said, but they wouldn't do it without me sending them more money. Instead if was like $95 for them to come out. And their location is close to mine and it wasn't a big job. It only took a half hour to do the job and to rework it it would not have taken them only half the time. They are a very reputable company. I would have thought they would have stood behind their work a little bit better, but I guess you live and learn. But I wouldn't hesitate to use them again. They called me quick and came out, like, the next day.

Description of Work
They installed an expansion tank on my hot water heater.

They put a condensate line in my attic due to a collapsed drain a slab house. It was not insulated and so it froze in the winter and burst. Water was coming into my attic and finally damaged the drywall and came through the ceiling into my house. I was told the condensate line was only under 1 year warranty so I had to pay for a repair. However, the repairman did not find both leaks, even though he said he had checked the rest of the line. As a result I had more water come into my attic and more damage was done to the drywall and I had to have another company come to repair a second leak. By this time, I did not trust Meyers any more to do the job.

Description of Work
They put in a new heater and air conditioner and replaced all my water pipes.

I got them off of Angie’s List. I really don’t know about the price, I guess it is comparison with what I’ve seen on television, advertises prices. This is the first time we’ve had central air. They have good quality service.

Description of Work
Heating and A/C.

Few challenges with install but in the end they fixed the problem. Would hire again.

The visit went fine, it is the lack of responsiveness and follow through from the field representative.

Description of Work
Had follow up questions and concerns, but could not get representative to respond or follow through.

The install went very well with the first of the two fans, but the second one was more difficult. The serviceman said that it would have been very challenging for us to do this install by ourselves, which we were going to try to do. Then we decided to have a pro do it since electrical work is not something to mess with if you do not have the knowledge. Now I'm extremely glad we had Meyers do this for us. It took him awhile to get the second one done due to the wiring being cut too short and I wanted it as close to the ceiling as possible, without the extension bar. The fans work great and run nice and quiet.

First technician did not figure out problem, but second one we called two days later did. They did not charge a weekend charge for second call since first one wasn't handled properly. Have used them before and been satisfied with work.

Our distinction is, we offer the highest quality of installation, service & repair for Air Conditioning, Furnaces, Water Heaters & Boilers. We use proven equipment. Accurate knowledge of our trade combined with ability is what makes us true professionals. We provide Adorable Price, Professional Installation, Expirienced service and Warranty. I am excited to tell you about myself and my company PHD H.V.A.C. I am originally from Ukraine. I attended one of the best universities in the Ukraine – Polytechnic National University. I earned my PhD in Technical Sciences, and became a professor and lecturer there. This is why I am called the “Professor Of Heating & Air Conditioning”. During that time, I started “Phaeton HVAC”. For many years, we installed & repaired high quality heating and cooling equipment. After running a successful business in Ukraine, I came to the United States and opened my new company, here, in Chicago! I have been a licensed HVAC contractor, here, for over 10 years. I am happy to be here and to offer my services and expertise. I take pride in my experience and knowledge. We offer the highest quality installation with proven equipment. You can relax, knowing that you will receive the best service, reliability and safety. All of my work is guaranteed & insured. All of my technicians are experienced journeymen & professional installers. Once you experience the high level of quality I offer, I know you will be satisfied with my service. I am looking forward to helping you with all your HVAC needs and having you as a customer and friend. Whether you need to repair or install a new your AC, furnace, boiler, water heater, mini-split system, Tankless (High Efficiency) Water Heater or Tankless (High Efficiency) Boiler, or have other urgent HVAC issues, we can help you achieve whole home comfort without any hassle on your part. As a family owned and operated business from the beginning, we guarantee personalized service and quality workmanship.  …

Safeway Chimney Sweeps & Duct Cleaning has been a family owned and operated business serving the greater Chicago land area since 1984. We are fully insured and C.S.I.A. certified. Safeway Chimney Sweeps & Duct Cleaning is a full service company providing both cleaning and repairs. A 22 point safety inspection is provided with each chimney cleaning to ensure a thorough clean and adherence to the strict standards we set for our work. Also, our certified technicians are equipped to service all of your heating and air conditioning needs whether it be repair or replacement. Owner Dan Florian and his crew have been certified to perform each of the services they offer by the various industry departments. We have 12 employees. We are fully insured and certified. We accept cash, Visa, Mastercard, Discover, and personal checks. BBB A+++ rating. Repair work and free estimates.  …

Northwest Indiana Generator of Crown Point,IN, was established in 2002 to service the surrounding area and provide residents with all their standby electric power solutions. Our staff of knowledgeable, dedicated professionals takes pride in providing outstanding, personalized service to our customers and our community. Call us today and become one of our many satisfied customers.  …

How is Meyer's Heating and Cooling overall rated?

Meyer's Heating and Cooling is currently rated 4.7 overall out of 5.

What days are Meyer's Heating and Cooling open?

Meyer's Heating and Cooling is open:

What payment options does Meyer's Heating and Cooling provide

No, Meyer's Heating and Cooling does not offer eco-friendly accreditations.

Does Meyer's Heating and Cooling offer a senior discount?

No, Meyer's Heating and Cooling does not offer a senior discount.

Are warranties offered by Meyer's Heating and Cooling?

What services does Meyer's Heating and Cooling offer?